HSBC Bank Malta has seen its profits slide by 23 per cent to €38.6 million in the financial year ended December 2018.

A bank statement issued on Tuesday blamed the results on low interest rates and excess liquidity in the market, adding that there were scant opportunities for investment.

However, CEO Andrew Beane also warned about the danger to the sector as a whole: "2018 was difficult for the local financial services sector which suffered further reputational damage. It is essential that all market participants ensure anti-money-laundering standards are fully implemented without delay in order to avoid more significant long-term risks. We welcome new initiatives announced by the local authorities which the industry must fully embrace and support," he said in the company announcement.

The bank has seen a reduction in its loans to corporates - which among other things resulted in a 10 per cent decrease in net interest income. It did however, register a boost in the number of mortgages approved - which increased by 10 per cent. Net loans and advances to customers decreased by 1% to €3,110m, driven by risk management actions and a reduction in non-performing loans. Retail lending grew by 2 per cent.

Operating expenses were 5 per cent lower compared to the year before, but the lower income resulted in a higher cost efficiency ratio of 73 per cent compared with 66 per cent in 2017.

The bank said that it expected credit losses of €3.5 million, €4.7 million higher than 2017 when it managed to reverse €1.2 million in loan impairments. It has, however, managed to reduce non-performing exposures by over 19 per cent compared with December 2017.

The final gross dividend will be 1.8 cent per share, which brings the total dividend for 2018 to 5.8 cents. This brings the full year 2018 dividend pay-out ratio to 47 per cent.

Mr Beane said that the bank's reduced profitability had led to a "stronger and safer bank for our shareholders, customers, employees and the jurisdiction". 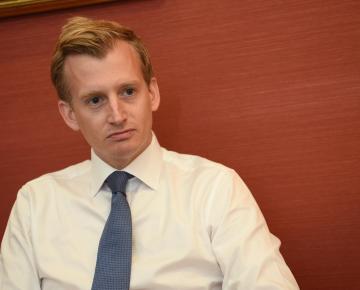 "It is a clear that the new European Central Bank requirements relating to the treatment of non-performing loans (NPLs) mean that Malta’s current framework for the recovery of security in the event of default requires reform.

"Banks will be required to hold additional capital against fully secured NPLs as a direct result of the long time to recover through current legal processes. For HSBC the expected impact relates to loans where the bank does not expect to incur additional losses even though the recovery process currently takes years," he said.

"While we will sustain the bank’s position as a strong dividend generating company, the board has recommended a final dividend pay-out ratio of 30 per cent in order to allocate additional capital to grow the business and meet the new ECB NPL requirements in the event that reforms to the current system are not forthcoming.”