Updated 3.30pm with updates and video

A major fire in a distribution centre left hundreds of households around the St Julian's area without any electricity during the night and this morning.

Enemalta plc said its employees worked throughout the night to repair extensive network damages, after a fire in one of the company’s electricity distribution tunnels disrupted supply to customers in parts of St Julian’s and nearby localities.

"We’re going to have to throw away all of the freezer contents. It feels like we’re living in the dark ages," one resident said.

The network disturbance was registered at the company’s St Andrew’s 33 kV Distribution Centre, in Pembroke, at 12.26am. The distribution centre was disconnected from the national grid, disrupting electricity supply to customers in parts of St Julian’s, Pembroke, Magħtab, Baħar iċ-Ċagħaq, Swieqi and San Ġwann.

As soon as the fire in the tunnel supplying this distribution centre was identified, Civil Protection Department firefighters arrived at the distribution centre to enter the smoke-filled tunnel and extinguish the flames. The burning cables were located several hundred metres inside the underground tunnel. Enemalta officials and engineers were also on site to assess the damages as soon as it was safe to enter the tunnel.

Works to repair the cables damaged by the fire and reconnect the St Andrew’s Distribution Centre to the national grid started as soon as the CPD confirmed it was safe for the engineers and technicians to reach the incident area. Several Enemalta employees are still inside the tunnel and will continue working throughout the day to complete the repairs. 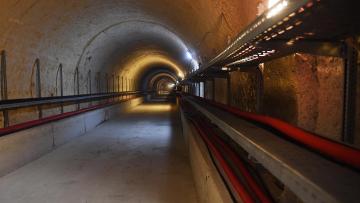 In the meantime, electricity supply to the customers affected started being gradually restored to some of the customers affected, through alternative connections. A few small areas in parts of Swieqi, Pembroke and Baħar iċ-Ċagħaq will be reconnected to the network as soon as the cable repair works are completed.

Enemalta plc is looking into the incident to identify and implement any measures that may be required to minimise the risk of similar difficulties.

This afternoon, Enemalta said its engineers and technicians will continue working in the tunnels until all the burnt cables are replaced, tested and made available to the company’s Network Planning and Operations Control Centre, to restore the network’s redundancy in this area, as necessary.

While thanking its employees, the Civil Protection Department and the police for swiftly responding to the emergency during the night, Enemalta said it regretted any inconvenience caused.

For further information or assistance, customers can contact the Enemalta 24/7 customer care team on 8007 2224 or link up with the company on Facebook – www.fb.me/eneplc.