Hundreds of people have been left waiting for hours for their vaccination appointments in a long queue snaking through the grounds of the University of Malta campus.

The health ministry suggested the issue was due to the fact that people aged between 30 and 40 have been invited to apply for the jab this week, with first appointments set for Wednesday.

According to the National Statistics Office, there are more people aged between 30 and 40 than there are in any other decade, with 88,901 people in this cohort.

It took a Times of Malta journalist more than six minutes to walk from the top to the bottom of the queue at the Tal-Qroqq campus.

A timelapse of the queue from top to bottom. Video: Chris Sant Fournier

One woman who had been given an appointment at 10.40am and who had been waiting in line for almost two hours described the queue as incredible.

She suggested that a lot of people had been given the same appointment slot since she saw a huge group arrive at the same time.

“It took me over 5 minutes to get from one end of the queue to another and I have been waiting here a while. I’m sure there has been some mess up with the appointments,” she said.

Employees on campus said this was a “one-off” and they had never seen a queue like this since vaccinations had started being offered at the university.

“Usually we don’t even realise that there is a queue, that's how quick the service is. But today this clearly isn’t the case,” said a woman who worked in the admissions office.

Rachel Farrugia, who had been waiting an hour and was only halfway through the queue when Times of Malta spoke to her, said “they could have planned things better.”

“I was quite impressed they gave us an appointment so quickly but given the circumstances they could have spaced the appointments not to have such a big group of people collect at the same time,” she said.

A spokesperson for the health ministry said the vaccine is being offered in 12 cubicles at the University of Malta, one of the larger vaccination sites across the island. 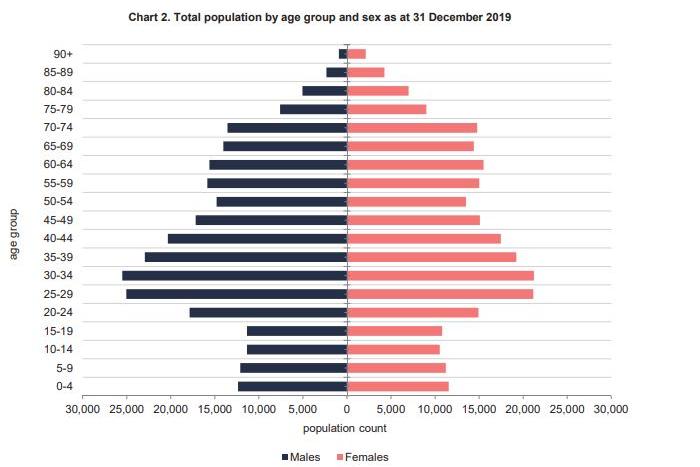 There are more people aged between 30 and 40 than in any other decade. Graphic: National Statistics Office

Malta's vaccination drive has been a top priority for the country, with 352,421 doses administered so far, including 111,318 second doses.

Four different vaccines are being administered after being approved by the European Medicines Authority.

Three of those, made by Moderna, Pfizer/BioNTech and AstraZeneca, require two shots to be fully effective, while a fourth, made by Johnson & Johnson, is a single-shot vaccine.

Health Minister Chris Fearne has previously said that Malta is aiming to have fully vaccinated 70 per cent of adults by June, with every adult offered a vaccine by mid-August.