A group of schoolchildren is believed to have gone missing in the underground chambers of the Ħal Saflieni Hypogeum a couple of decades after it was discovered in Paola.

Given up for dead, the children’s corpses were never found in the prehistoric cemetery, where according to some, several alien skulls were unearthed when the site was first discovered.

These are just two of the myths that will be busted at the Hypogeum’s refurbished visitors’ centre, to open its doors next month.

The prehistoric site has been closed since last summer and will reopen on May 15, with tickets already available online from Heritage Malta’s website and from Fort St Elmo or the Gozo Museum of Archaeology.

While tours will still be limited to eight per day – one every hour – those who turn up on site without a pre-booked ticket can enjoy a virtual tour of the underground cemetery at the refurbished interpretation centre.

The Hypogeum is spread across three levels – with the lower level not physically accessible to visitors. However, it will now be virtually accessible through an audiovisual projection.

The refurbishment project, supported by a grant from Iceland, Liechtenstein and Norway through the EEA Grants 2009-2014, includes studies about the current condition of the site in terms of conservation, geology and organic residue.

Project leader Maria Elena Zammit explained that this was the first study of the sort for the Hypogeum, which is composed of some 30 rooms.

The project also includes the elimination of harmful materials and residue and the installation of a new micro-climate management system.

Perit Katya Sammut added that among other things, the fabric covering the floor and the walls has been replaced with high-pressure laminated panels. While fabric can host biological growth, it is easier to keep the new material clean.

The refurbished visitors’ centre will help bust these myths

The insulated roof sheeting which covers the monument was also replaced to eliminate rainwater leakage, while the insulation of the external walls has been improved.

When asked what had prompted the refurbishment, Ms Zammit explained that the prehistoric cemetery was discovered at the beginning of the 20th century during the excavation of wells of houses that were being built on the site.

By the time the discovery was reported to the authorities, most of the houses had been completed.

Following the inclusion of the site in the Unesco World Heritage List decades later, scientific missions were flown over to help Malta take better care of it.

The advice was to control the environment and limit the number of visitors. In fact, the houses on top of the site were bought and brought down, and an environmental management system was installed. After 20 years, the system had to be upgraded, Ms Zammit explained. 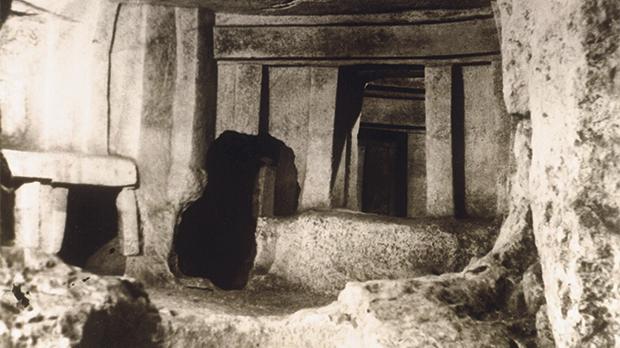 This photo of the Hypogeum was taken around the time that a rumour about missing children started making the rounds. The story was even recorded in National Geographic magazine in 1940 (bottom). Photo take in the mid-1930s by Geo Fürst

When children ‘disappeared’ in the maze below

Years ago, one could walk underground from one end of Malta to the other, however all entrances have been closed by the government because of a tragedy. 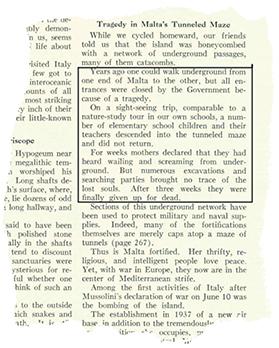 Or so National Geographic magazine wanted its readers to believe in a 1940 article.

According to the author, a group of elementary schoolchildren vanished while on a visit to the tunnelled maze of the Ħal Saflieni Hypogeum.

For several weeks, people heard “wailing and screaming” wafting up from underground, but des-pite numerous excavations and searches, the children were given up for dead. Heritage Malta’s Senior Curator of Prehistoric Sites, Katya Stroud, believes this myth – similar to ones tied to the Rabat St Paul’s Catacombs – was made up to keep adventurous children away from such sites where they could easily get hurt.

There have not been any discoveries of a collapse on site, nor have there been any printed records of the incident. 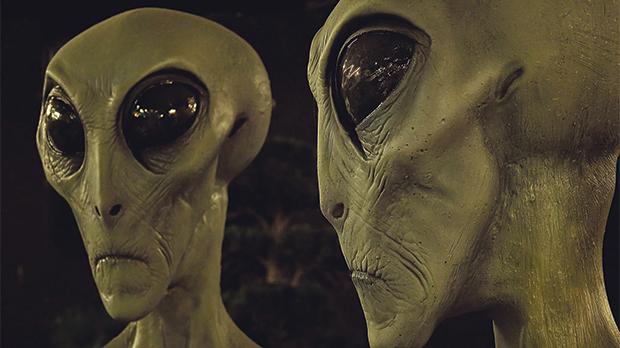 The people buried in the Hypogeum were not extra-terrestrials – they just happened to have long heads due to their long skulls, one of the three main types of skull.

This can be traced back to Sir Themistocles Zammit’s first report about the Hypogeum in 1910.

Apart from skeletal fragments found there, the site in fact yielded the remains of some 10 skulls. Since Sir Zammit was a doctor, he recorded their measurements.

But this came at a time when there was an ongoing phrenology debate linking different skull sizes to different ethnicities.

Of the three main shapes of skulls, those at the Hypogeum were of the long-headed type.

But as the years rolled by, people interpreted this to mean that the skulls were “elongated”.

For some time, these were linked to what is known as “snake” or “serpent” priests, while in the 1980s, some said that those buried at the cemetery were aliens.

To their disappointment, those who actually saw the skulls on display (they were still exhibited at the National Museum of Archaeology in the 1980s), realised that the skills were, in fact, not elongated. 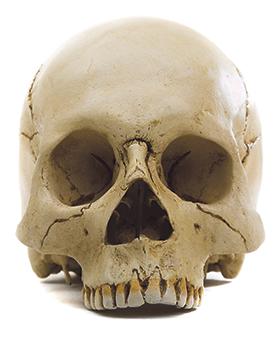 It is a common belief that 7,000 people were found buried on site when the Hypogeum was being excavated.

Again, this idea can be traced back to Sir Zammit’s writings.

However, Sir Zammit’s was clearly an estimate of how many people could be buried at the cemetery over the succession of many centuries.

Sir Zammit had found fragments of some 100 people in one particular area, and he calculated the 7,000 figure according to the size of the site.