In truth, we’re a little sorry for the Kona Hybrid. It’s a car which is often overshadowed by its fully electric stablemate, with the tip-top Kona EV’s headline-grabbing range often causing people to flock towards it. Because of this, the Hybrid model can be left looking a little lost. 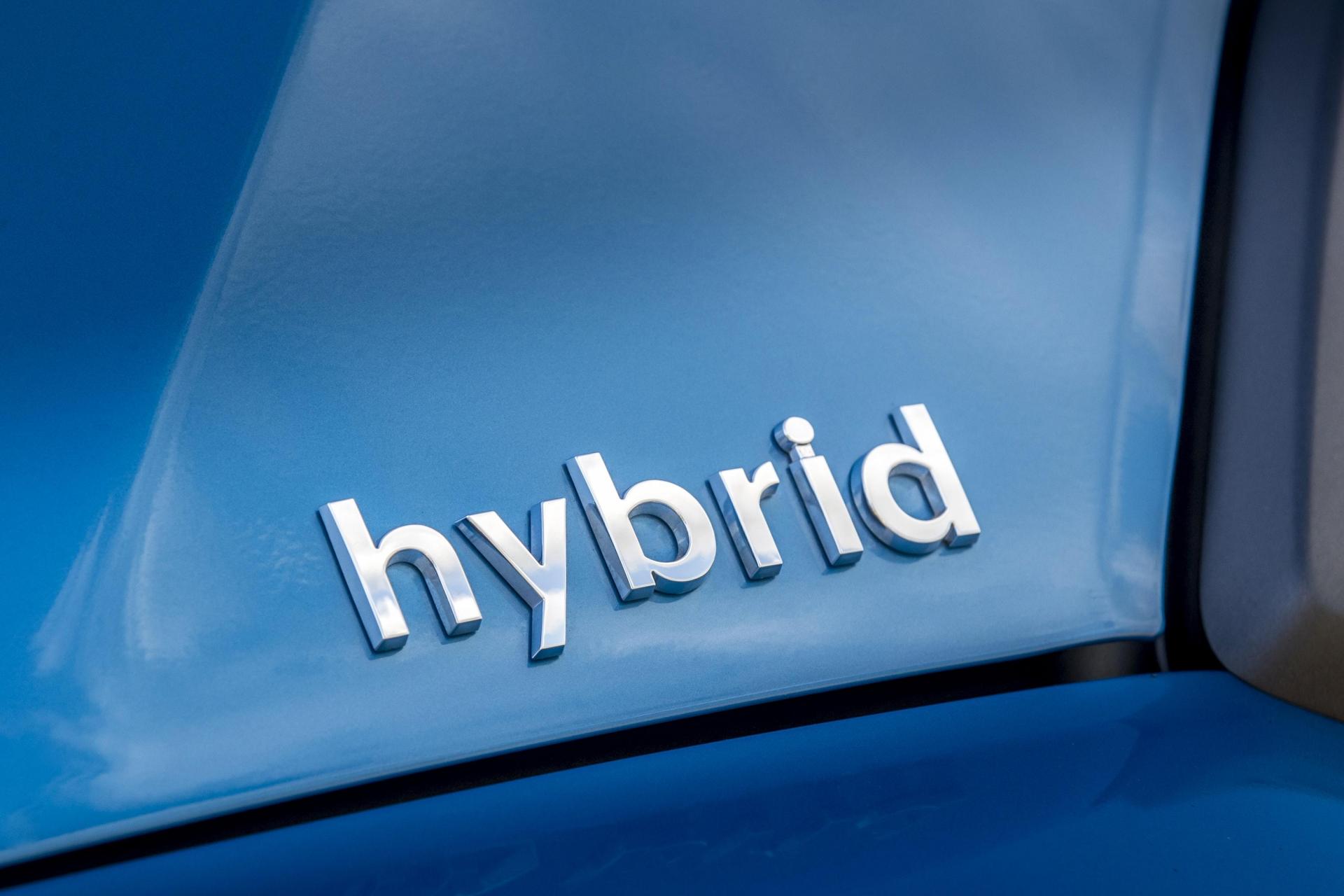 The hybrid powertrain aims to deliver the best of both worlds.

But what if you need the assistance of a petrol engine? The Kona Hybrid’s entry price undercuts that of the electric version, so it could be a good low-emission option for those who are finding the Kona Electric a stretch too far. We’ve been out and about in this latest Hyundai to find out what it’s like.

The entry-point to the Kona range is via a petrol 1.0-litre-engined version, but this hybrid version aims to offer the zingy performance afforded by that model with the added economic benefits that a hybrid powertrain affords. 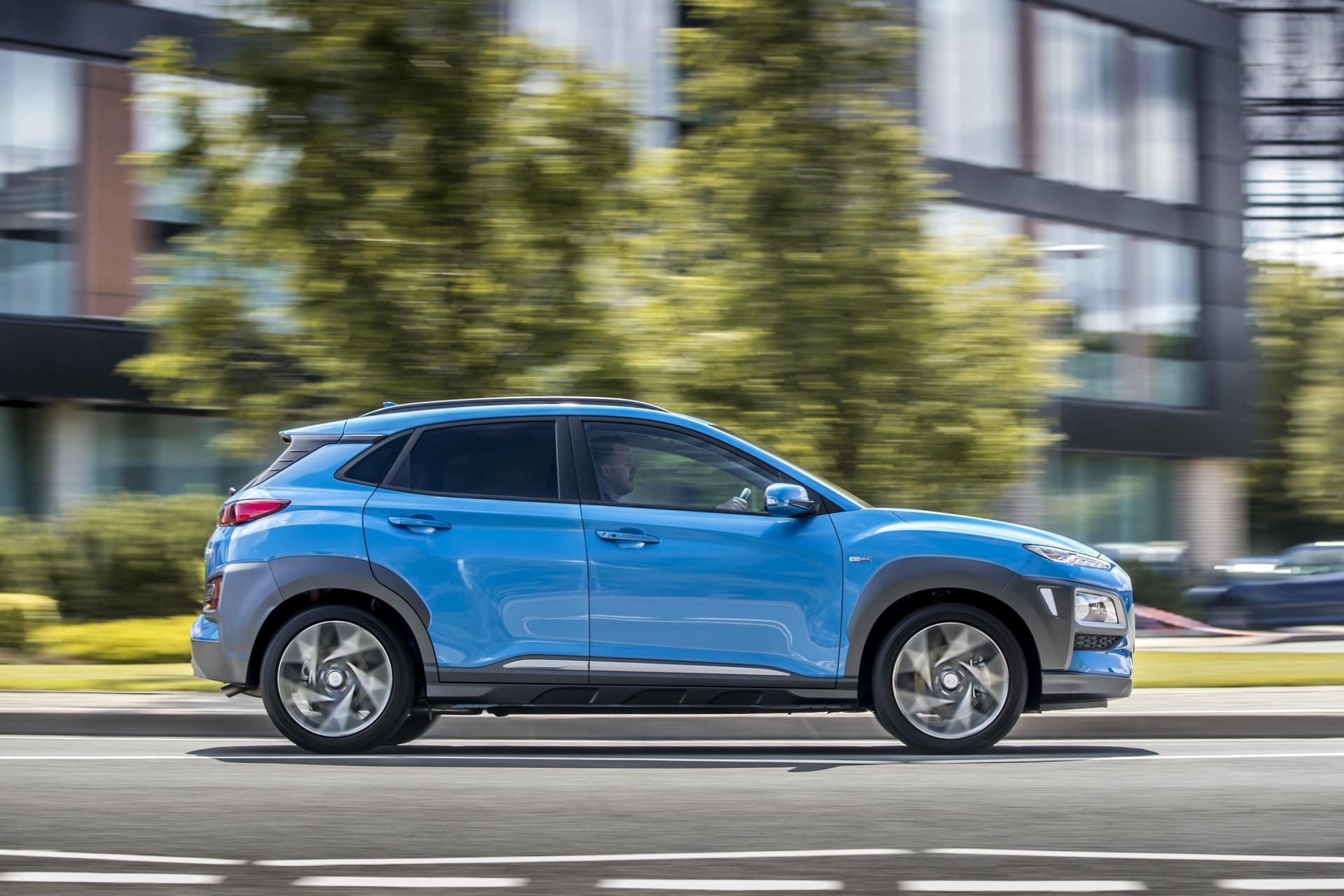 The Hybrid sits in between petrol and electric Kona models.

Inside, it’s got the high level of standard equipment that we’ve come to expect from Hyundai, while the firm’s five-year unlimited-mileage warranty provides excellent peace of mind, too.

The powertrain underneath the Kona Hybrid combines a 1.6-litre petrol engine with an electric motor and batteries. The batteries are large enough to allow the Kona to run on EV power alone – albeit at low speeds – which is particularly noticeable in stop-start traffic or when pulling away from a junction. Then, at higher speeds, the engine chimes in to add support. 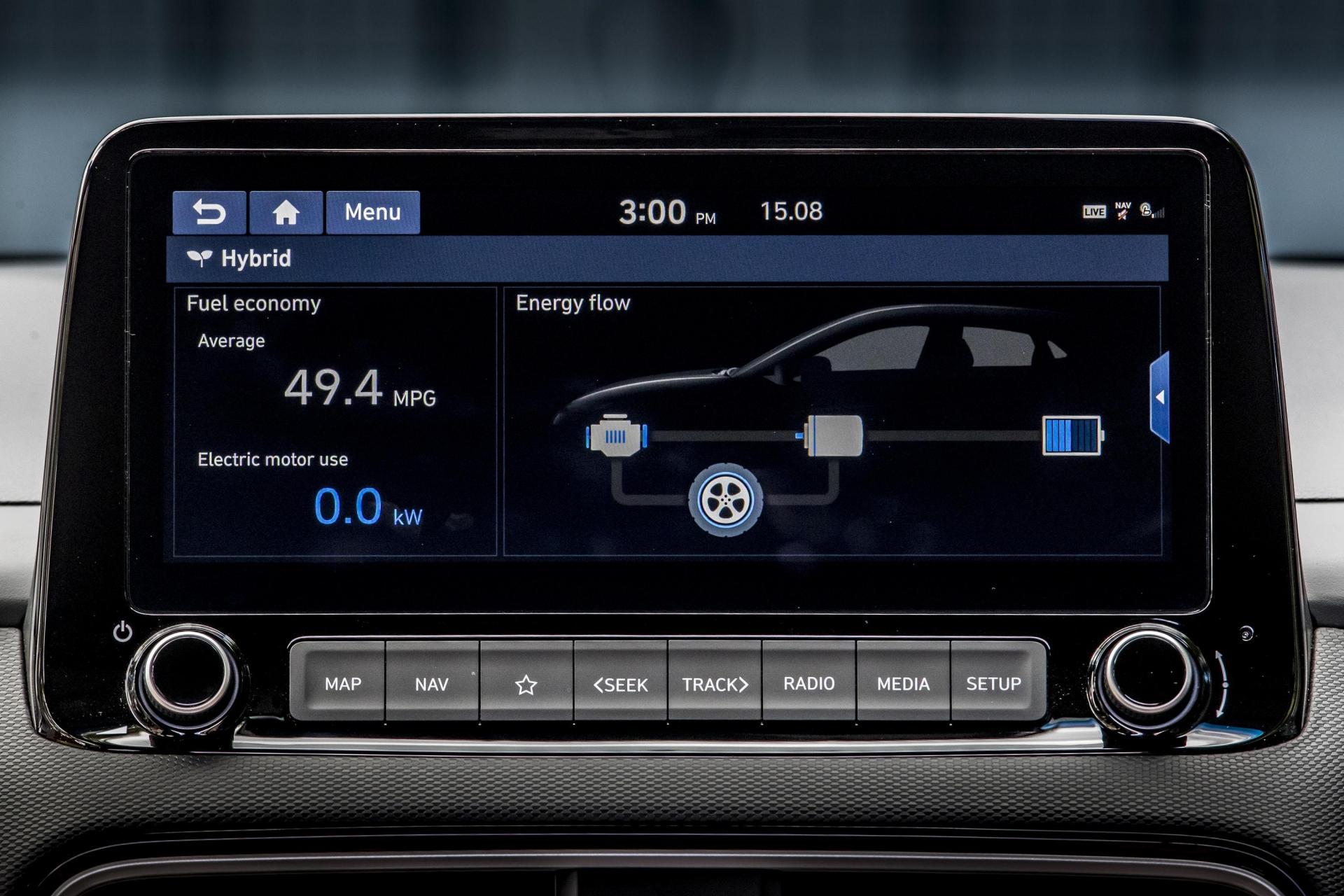 The hybrid setup combines a petrol engine with an electric motor and batteries.

Hyundai claims up to 56.6mpg and impressively low CO2 emissions of just 99g/km. This is no performance model, mind you, with 0-60mph (0-97km/h) taking just over 11 seconds. Power is sent to the wheels through a six-speed dual-clutch automatic gearbox.

First off, the fundamentals. You sit quite high in the Kona, which gives you an elevated view of the road ahead. The steering wheel has a decent amount of adjustment, and there’s good visibility out of both the front and the back. On the move, the electric motor means slow-speed movements are whisper-quiet, but ask a little more of the engine and it’s hard not to notice the petrol unit kicking in. Heavy acceleration produces quite the drone, in fact. 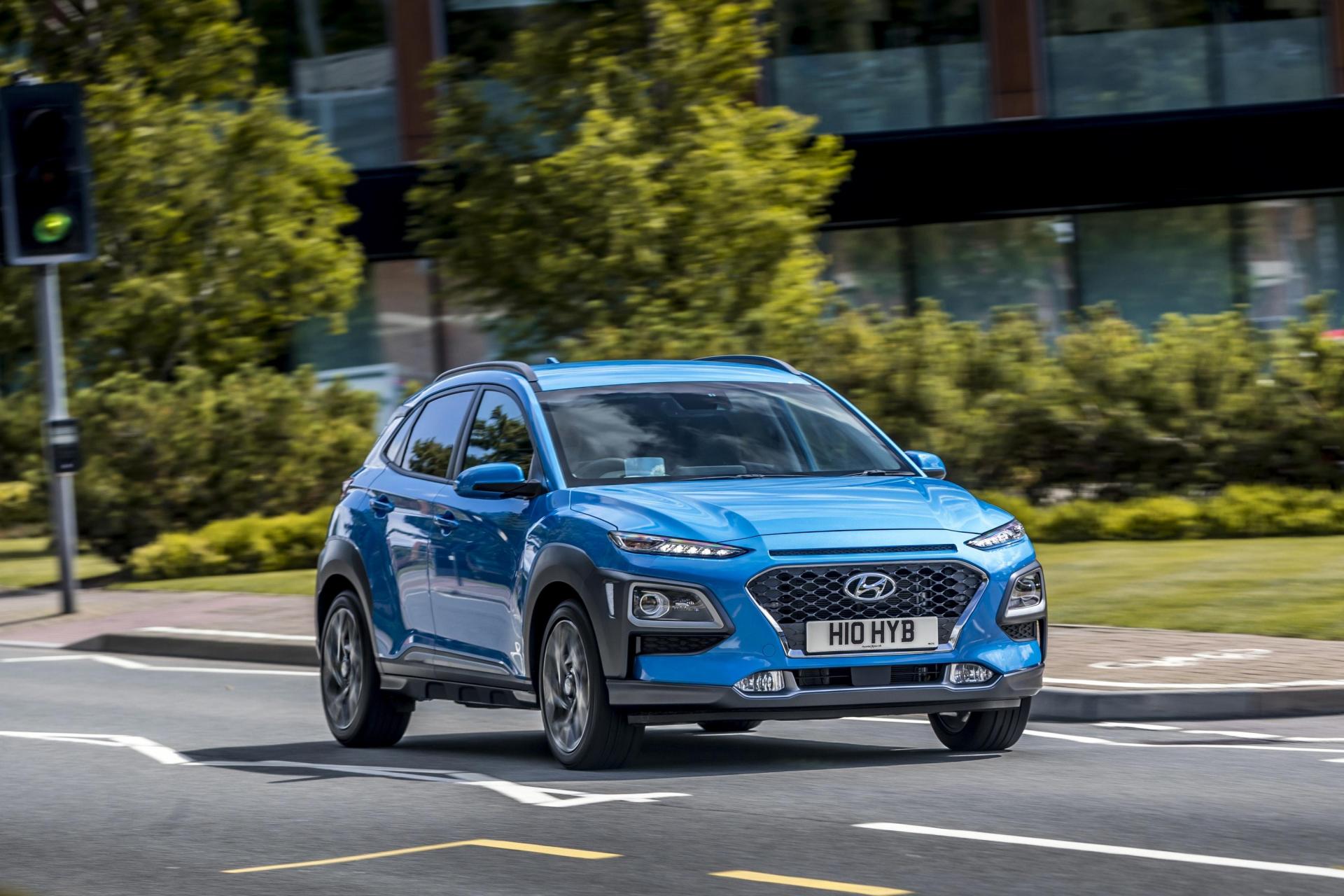 The Kona is well suited to around-town driving.

Then, at motorway speeds, there’s a good degree of wind noise generated by the pillars. The steering, however, is a high point thanks to a well-judged amount of weight. And though there are shift paddles located behind the wheel, the Kona’s ‘box is best left to its own devices.

We’ve always quite liked the funky, alternative design of the Kona. It’s a car that stands out among rivals, and that’s a tough thing to do in such a congested segment. The hybrid model does little to give away its eco credentials, either, with only small hybrid badges giving any indication as to its electrified powertrain. Our car, in top-spec Premium SE trim, came with 18-inch wheels, which did help to beef its already chunky looks up even further. 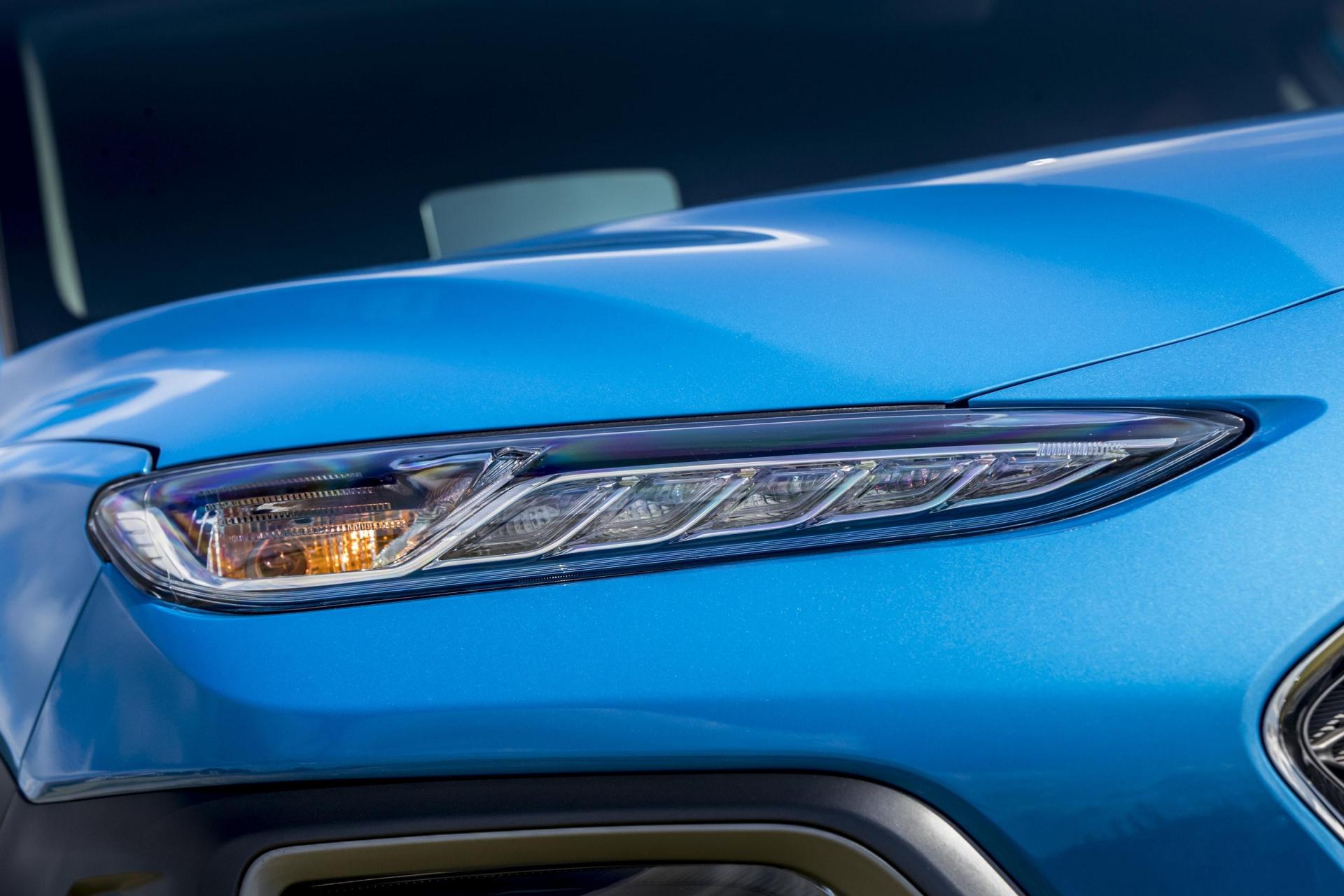 The Kona’s sleek headlights give the front of the car a distinctive look.

Jazzier colours tend to suit it best, with our car in a rather subdued grey shade appearing a little duller than you might want your crossover to be. That’s all down to the individual, of course.

The general fit and finish of the Kona’s interior puts many more ‘premium’ manufacturers to shame. Though there are some harsher plastics to be found, the overall layout and positioning of the major controls – along with the material they’re made from – is good, with everything logically laid out and easy to find. There’s plenty of space up front, too, while those in the rear have a decent amount of room for a car of this size. 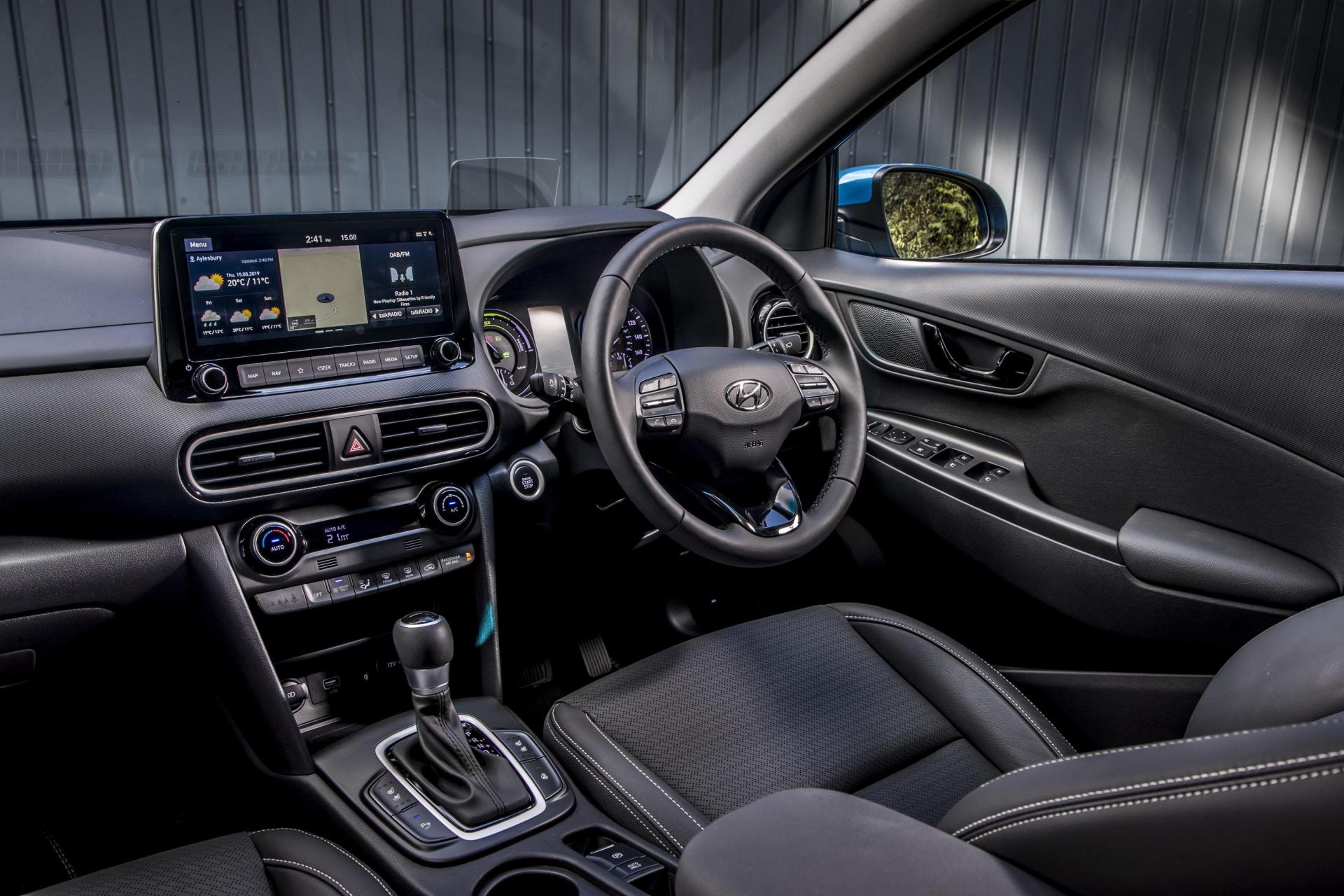 The Kona’s interior is smartly finished and bristling with tech.

When it comes to boot space, the Kona Hybrid does well. There are 361 litres of load area to play with, and while that’s a small amount less than you’ll find in some of the Kona’s key rivals, it’s about enough for most situations. It also chimes in at 29 litres more than in the fully-electric Kona.

Even though our test car was fitted in top-spec trim, the level of standard equipment provided was still mightily impressive. Features such as front seats which are both heated and ventilated are included – along with a heated steering wheel – as well as a head-up display, a 10.25-inch infotainment system and a full eight-speaker audio system. It’s an amazingly comprehensive list of kit. 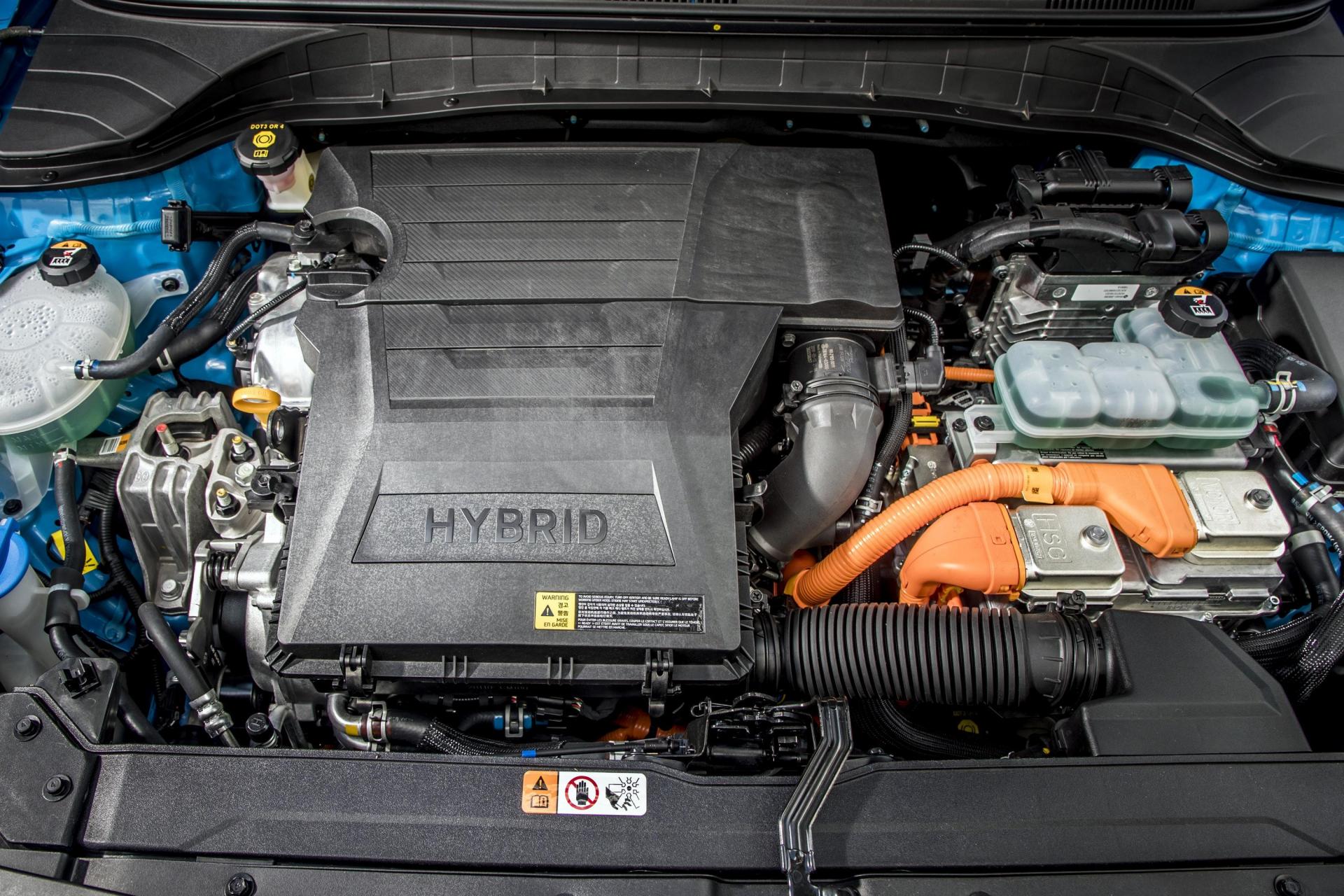 The Kona’s screen can be used to show information about the hybrid powertrain.

But far from just being an endless list of features added for the sake of it, everything on the equipment line-up works well and effortlessly. The infotainment system, for instance, might not have the razor-edged graphics of some rivals, but it’s easy to operate and is simple to pick up. It’s a similar story for the Kona in general, in fact.

The Kona Hybrid provides a significantly more efficient entry into the petrol-powered section of the car’s range. It’s best at the lower end of its pricing structure, where its excellent emission levels and impressive economy make it the pick of the bunch when compared to conventionally-powered versions. However, higher-priced examples – like the one we’ve tested here – sadly come too close in terms of price to the fully electric version. At this price point, we’d be more inclined to make the jump to the EV.

However, for those after the flexibility that a hybrid motor affords, then this Kona will be the ideal option from the line-up. Add in its solid interior, low running costs and Hyundai’s well-known reliability, and it’ll be a compelling package for many.