A 28-year-old former football referee who lost his leg in a horrific crash eight months ago has spoken of his determination to return to practising sport and eventually become a Paralympian.

Vincenzo Garofalo was thrown from his bike and then run over by a car, leaving him with life-threatening injuries.

He and his friend had been on their way home to Mosta on December 5 when the incident happened near the Pama shopping complex at around 4am.

His friend, Giovanni, who witnessed the car run over Vincenzo’s body, was left with minor scratches while Vincenzo’s life was changed.

“I woke up 10 days later,” he recalls.  “There was just my mother on the right and she told me I was in the hospital.

"She immediately told me that tests showed I was below the alcohol legal limit. When I saw that I lost my leg I thought: ‘Don’t worry. Nothing happened.’ Maybe it was the medication.

“I remember being relieved that I still had my left leg so I could ride a motorcycle and change gear,” he says as he bursts into laughter and recounts how his right shoe was returned to him after the accident – the shoe he could no longer wear.

Vincenzo, from Naples, moved to Malta in January 2021 for a one-year internship after completing his Masters’ degree in marine engineering. His plan was to travel around the world after his year in Malta, which was coming to an end when the accident happened. 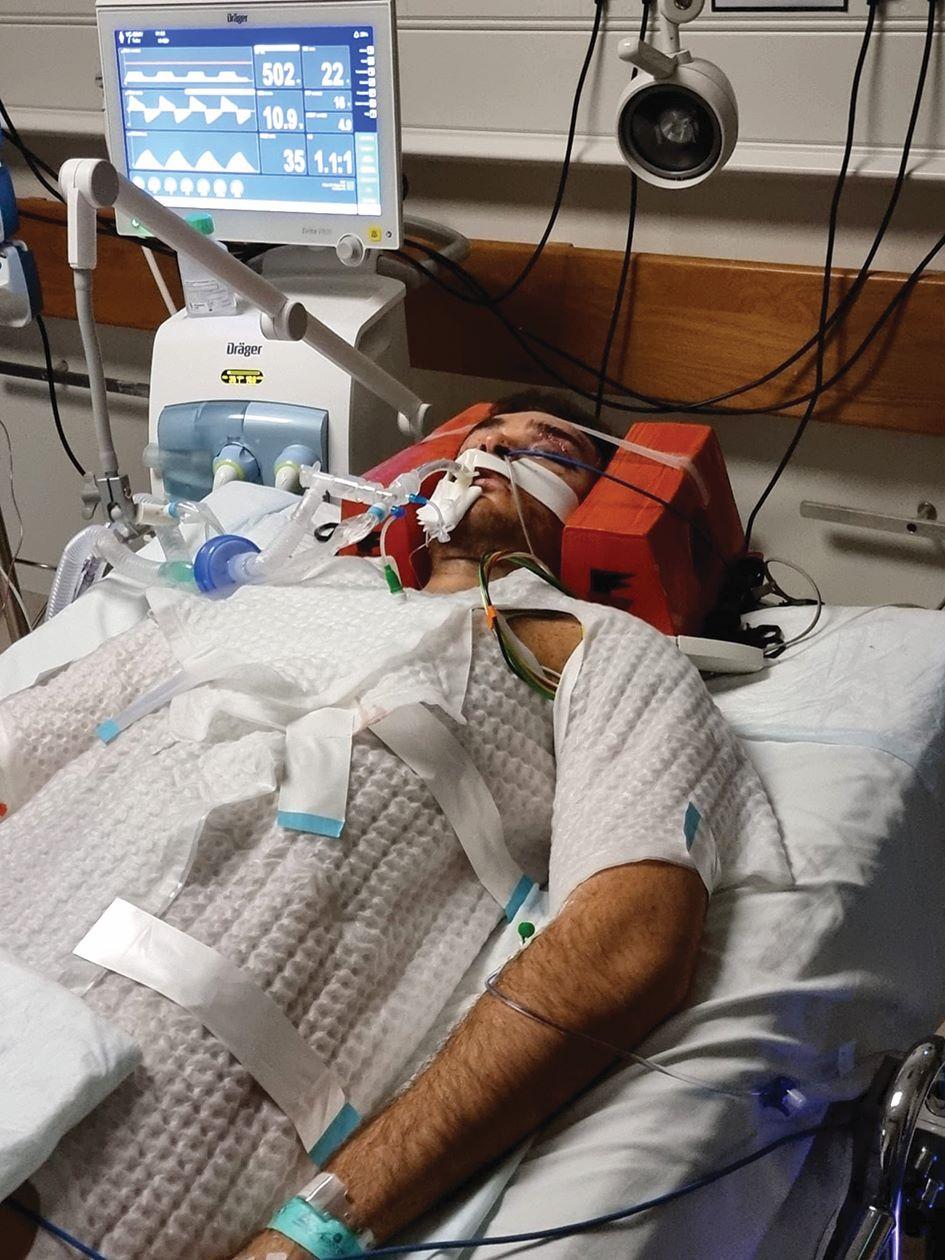 Vincenzo in hospital. When he woke up after a 10-day coma he found that his right leg had been amputated.

Former referee would like to return to sports, travel

The former referee is still undergoing rehabilitation and is appealing for help to afford a set of prosthetic legs that would allow him to return to sports and travel. With the support of his friends, he set up a crowdfunding site asking people to help him get back on track.

“Two years ago, when I travelled in Europe, I met some people who were Shamans [a religious practice in which people have access to, and influence in, the world of good and evil spirits] and they told me happiness is a choice. For two years I tried to understand what these words mean. Why a choice? But, after the accident and the coma, I understand. Now I chose.

“I am happy because I choose to be happy… A lot of people ask me if I am happy. I am happy but, at the moment, I am not free because I am not independent. I rely on crutches and a wheelchair,” he says from his home is Mosta where he has been living since he was discharged from hospital after six months.

I am happy but, at the moment, I am not free because I am not independent

“I am still young. I owe it to myself,” he says as he explains that he wants to go ahead with his travels and wants to be able to do sports.

A former referee back home in Torre del Greco in the province of Naples, he wants to find a sport that he can focus on. But doing all this requires good prosthetics as the prosthesis supplied by the hospital is basic and allows him to walk but not take part in sports.

“I am taking control of my life again but with considerable difficulties and insufficient means. To be able to do it fully, I need advanced prostheses to start walking, playing sports and returning to a normal life.

“The cost of these devices amounts to tens of thousands of euros, which, unfortunately, neither I nor my family has… I have great ambitions for my future, I dream of being able to participate in the Paralympics, get to the Everest base camp, do the Camino de Santiago and I don’t want this to be denied me because of a purely economic problem.”

You can support Vincenzo get back on track by visiting the crowdfunding page here.