Justice Minister Owen Bonnici was also handed a full copy of the Egrant inquiry as he was providing legal counsel to the Prime Minister and his wife, the Attorney General told a court on Tuesday.

Speaking under oath during a two-hour long hearing, Attorney General Peter Grech said that he had first given Joseph Muscat a photocopied version of the full Egrant inquiry report and then sent Dr Bonnici an electronic copy some days later.

Dr Grech was testifying in constitutional proceedings filed by leader of the Opposition Adrian Delia, who is challenging the AG’s decision to deny him a full copy of the Egrant inquiry, which runs into some 1,500 pages. 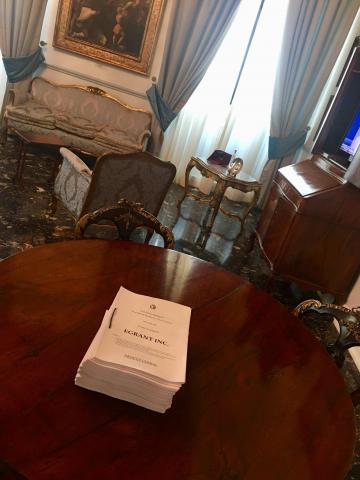 The Egrant inquiry at the Office of the Prime Minister.

He insisted that he was correct to deny Dr Delia a copy of the full inquiry, saying that doing so would have been "throwing it into the political arena".

"Handing it to the Opposition leader, I might as well have published it online," Dr Grech said.

Dr Grech told the court that magistrate Aaron Bugeja, who was leading the inquiry, had contacted deputy AG Philip Galea Farrugia to let him know that the report was ready.

On July 20, Dr Galea Farrugia had personally withdrawn the file from the magistrate and called his superior at around 9.30pm that same evening.

The following morning, the attorney general’s office had issued a statement declaring that the Egrant inquiry report had been concluded, prompting a flurry of public statements calling for its publication.

The AG's office had received a letter from lawyer Pawlu Lia, on behalf of Dr Muscat and his spouse that same day, asking for the inquiry to be published and for a copy to be handed over to the Joseph Muscat and his wife.

Later that same afternoon, Dr Grech had sent a photocopied version of the inquiry report to the Prime Minister. The hard copy was delivered by a police officer on duty at the AG’s office on the day.

Asked by lawyer Vincent Galea, one of Dr Delia's lawyers,  whether that copy had been redacted or not, Dr Grech replied in the negative. "The AG’s office does not redact. It either gives you a copy or not."

"Obviously I realised that there was an element of risk in this as always," Dr Grech went on, adding that however, in this case he had felt that the Prime Minister had a strong case which merited that his request for a full copy to be upheld.

Subsequently, a second request for a full copy reached the AG via a personal call from the Justice Minister, who was acting as legal counsel to the Prime Minister and his wife. Dr Grech duly obliged, mailing an electronic version to minister Bonnici on July 23.

“In my press release on July 22, I had made it clear that the inquiry was not being published in its entirety since there was confidential banking information concerning third parties and ongoing investigations. I actually went against the general current calling for the publication of the full report. I could have appeased the ‘vox populi’ but I decided to do otherwise. This inquiry had a bearing on the political life of the country.”

Confirming that he had set no conditions to anyone, barring the publication of the inquiry, Dr Grech explained that his main consideration when handing over the full copy to the Prime Minister lay in the fact that the latter had tied his political office to the outcome of the inquiry.

“Were not the conclusions sufficient to satisfy that interest by the Prime Minister?” Dr Galea persisted.

“Yes, but in his case I felt he had a right to the full evidential basis of the inquiry,” Dr Grech declared.

Asked why he had decided to deny the Opposition leader the same information, the attorney general said that Dr Delia’s political interest was not strong enough to outweigh the secrecy of such an inquiry.

Insisting that his only involvement in the inquiry had been to take a decision on the publication of copies, Dr Grech declared that he “had no role in the inquiry.”

“So you did not bar anyone from publishing the report. Why bar the Opposition Leader from having a full copy?” Dr Galea pressed further.

“He would have spoken about it in public. Otherwise why would he have asked for a copy?”

Asked finally whether the published conclusions had been redacted, Dr Grech pointed out that the “principal conclusions” as defined by the magistrate had been made available to the public at large, explaining further that the PM had been given a copy of the proces verbal, not the entire acts of the inquiry which were a different matter running into volumes of evidence.

“These conclusions were not published in their entirety,” Dr Galea insisted.

The case was adjourned to October for the cross-examination of the AG.