On the 20th anniversary of one of the most tragic days in history, I’d like to share a few reflections from my own pers­pective as I recollect the day and aftermath of the worst terrorist attack that shocked the world on an otherwise uneventful day, at least until 8.45am, New York time.

I was assistant pastor at St Stanislaus Kostka parish in Pleasant Valley, a suburb of New York, 65 miles north of Manhattan. I had just celebrated the 9am mass, and after visiting our nursery schoolchildren, I went to my room before starting my communion calls as I used to do every Tuesday.

Just before leaving, the phone rang. It was my mother frantically asking me if I was OK. Of course, I had no idea what was going on when she told me about the Twin Towers being hit by planes. 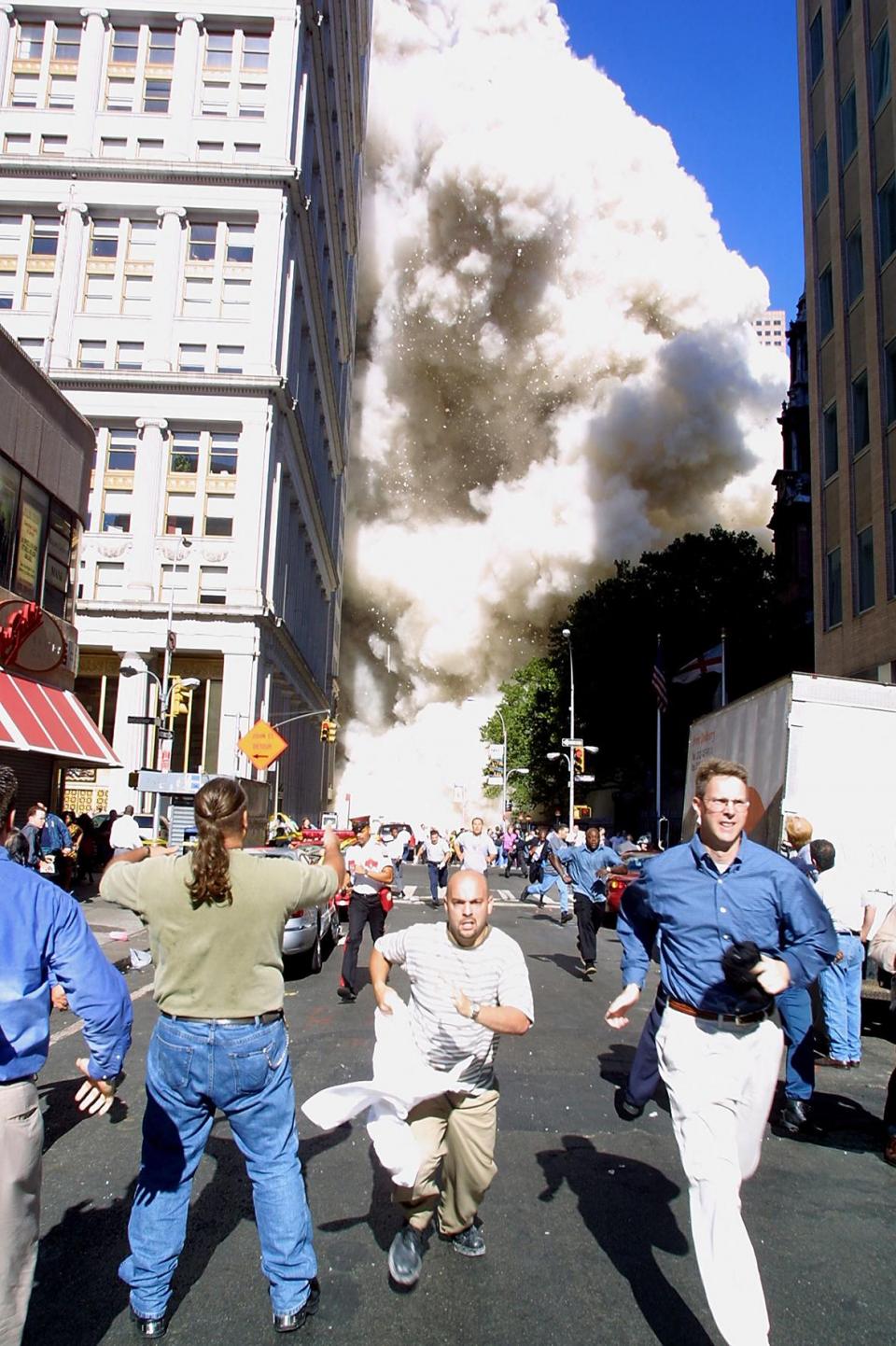 Pedestrians running from the scene as one of the World Trade Centre Towers in New York collapsed on September, 2001. Photo: Doug Kanter/AFP

As often happens, family members imagine you right in the midst of the action when they hear of an accident, a hurricane, a snowstorm or, as was this case, a terrorist attack on the US. I immediately assured my fami­ly that I was fine and pondered how my life and everyone’s life was going to change within minutes.

Following the horrendous scenes on TV, I knew right away that I was going to be very busy in the following few weeks and months, calming and counselling parishioners who came to pray and ask for moral strength.

I eventually wrote an article for the Times of Malta entitled ‘A five-day diary of a priest in New York’, besides giving a weekly interview for RTK radio for a five-month period, updating the Maltese people of the status quo in New York.

Reflections on the tragedy

But without going through the facts which we all know about, and the statistics that saw 2,977 victims, 25,000 injured and irreparable damage to the New York skyline, I highlight here just a few reflections of what transpired after the reality of the situation had sunk into our minds.

Soon after the second tower imploded, I got a call from the Kleins family, who had lost their 22-year-old son Peter, possibly one of the first victims, as the first plane hit right into his office, on the 83rd floor of Tower 1. By mid-afternoon I was sitting with the parents, Hans and Ruth, trying to console them, as they shared with me special memories of their family and their son. Peter had married a year earlier and had been an altar boy at our parish for many years.

Then I spent three hours waiting online to donate blood, a process that normally takes half an hour. Hundreds of Americans gave the gift of life by donating blood for the survivors. Many others turned to prayers.

I did a lot of counselling, even over the phone and through e-mail, with parishioners. People were trying to understand the meaning of this senseless act. 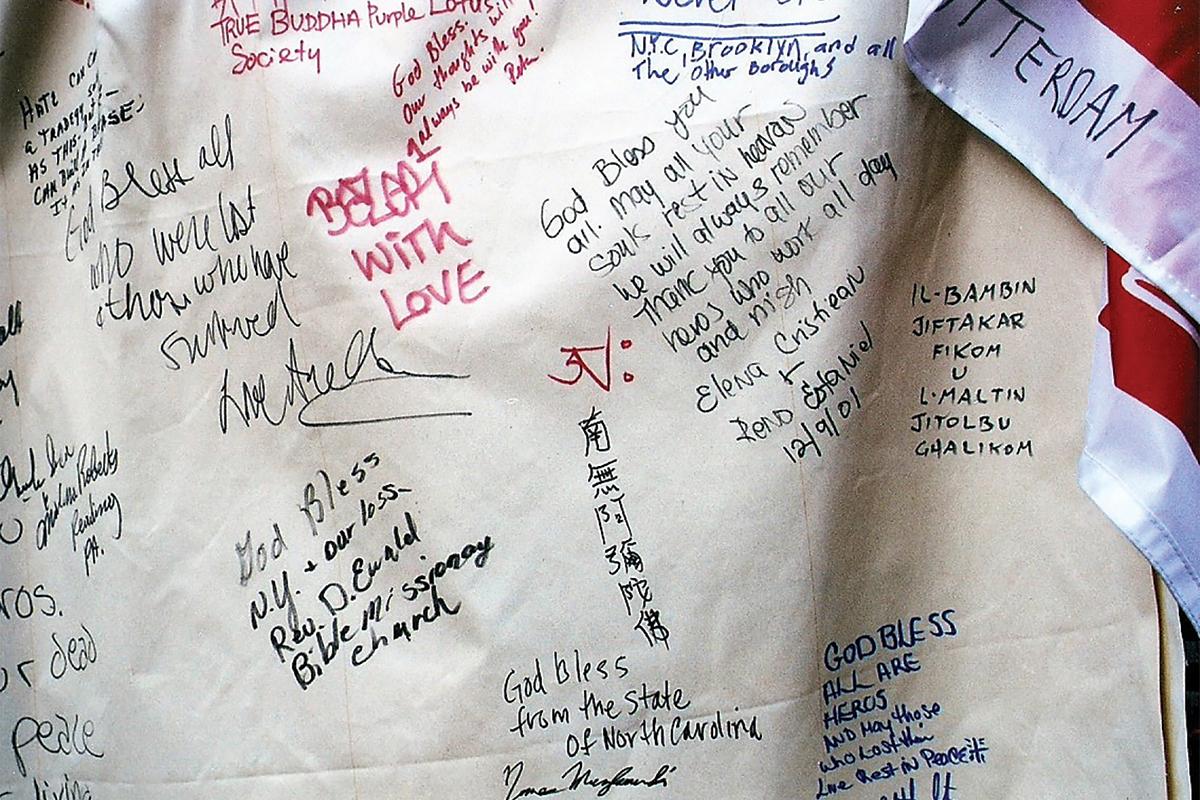 A tarpaulin at Ground Zero with Fr Julian’s message in Maltese (right).

Others reverberated quotes from Nostradamus and asked if the end of the world was nearing. I encouraged them to think positive, “to try to light one candle instead of cursing the darkness” – that is, to focus on praying, support and unity, instead of vengeance or hate.

In the evening, we scheduled a mass for the victims, and obviously the church was packed, and people stayed afterwards, to confess, to talk and receive comfort. The stories of many of the survivors and victims were constantly being relayed on TV.

Since I was on Long Island for 18 years, I knew many people who worked in the business district and in the World Trade Centre, and hoped and prayed that they had survived.

A former youth group member from a former parish also died in the attack. Another parishioner was on the 51st floor during the tragic event. She used to lead our congregation in singing every Sunday and was an active member of our choir.

Joanne Ernest told me the incredible story of her escape, having to walk down 51 floors to reach the streets. These are her own words in an e-mail she had sent me: “As I reached the street, I could see people jumping from the top floors. A sight I don’t think I’ll ever forget! I was two blocks away from the WTC when Tower 2 started to collapse. 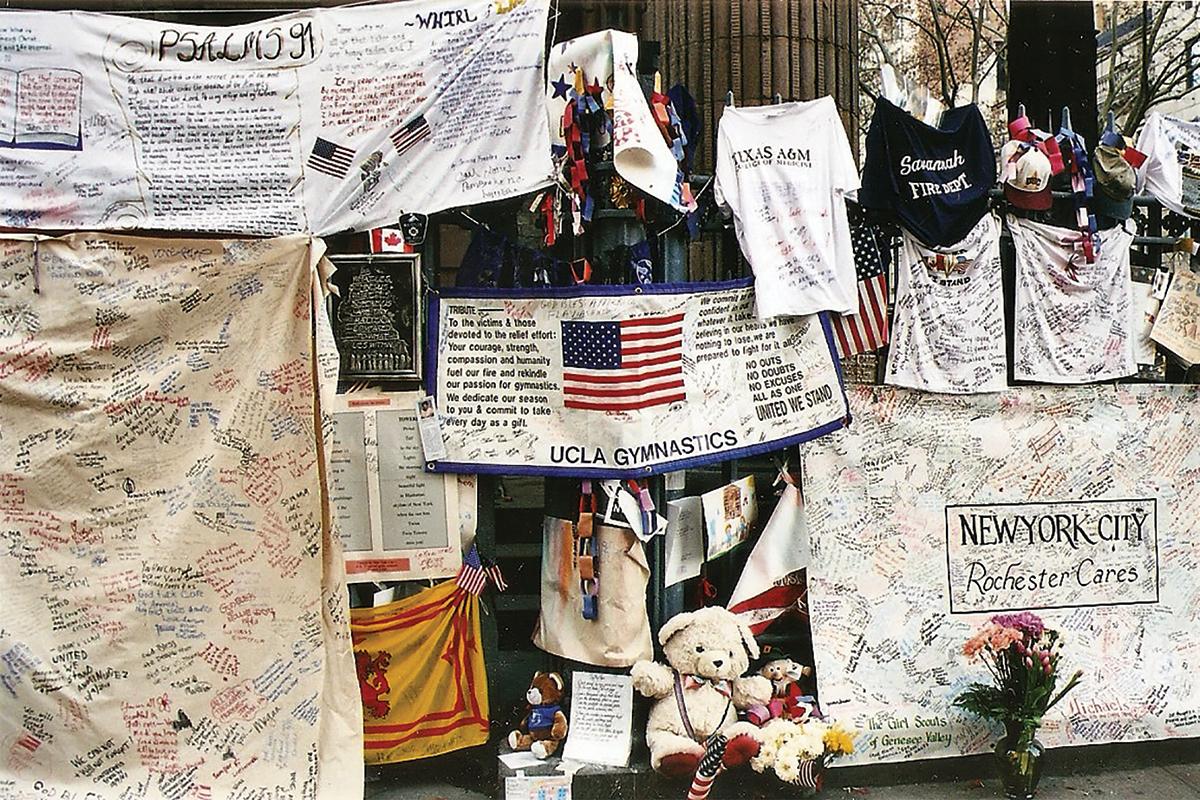 Memorabilia left around Holy Trinity church in New York City, in memory of the deceased. 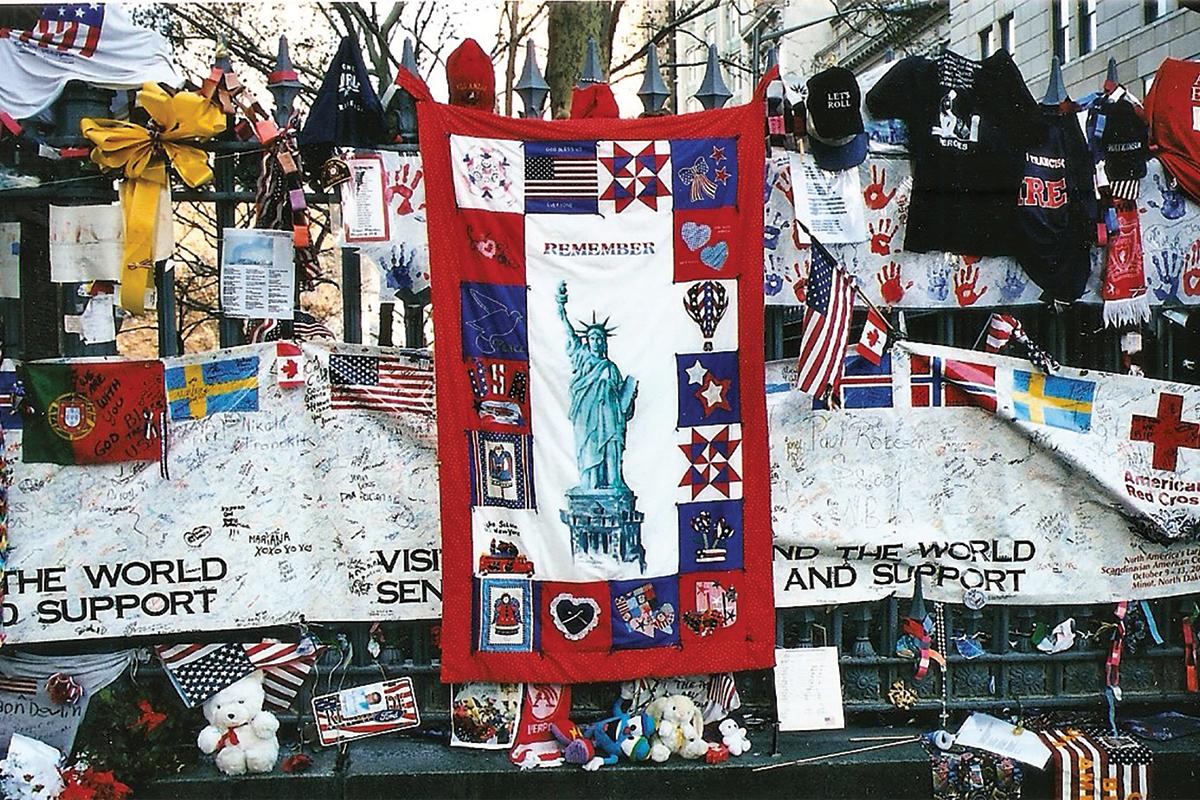 “As I ran, the debris cloud overtook me and with several others I ducked into a store to get away from the debris. As I was waiting, the 1st tower collapsed! During this time the police came in looking for eye goggles and they told everyone they had to clear the area.

“I started heading north and just kept going and going!! No subways… no taxis... so I ended up walking all the way to Grand Central Station, at least five miles.”

Some of the parishes on Long Island and New Jersey, where most of the victims resided, had to do as many as 30 funerals over the following three months, the majority without a body. These included the funerals of over 300 police officers and firefighters, with thousands of their comrades in attendance for each funeral.

As the rescue operations continued in the days following the attack, I met a fireman friend of mine who was helping out in the recovery process. He told me that all they were finding were body parts and no one was alive.

I watched on TV the heart-breaking story of Howard Lutnick, CEO of Cantor Fitzgerald, who lost all 658 of his employees who were on the very top floors of one of the Twin Towers, including his brother.

Lutnick survived simply because he had taken his son to his first day of kindergarten, and was heading towards work a little later than usual. Sixty of the male employees who died left behind pregnant wives.

Friday, September 14, 2001, was declared a ‘National Day of Mourning and Prayer’, and the rest of the world joined the US in prayer services and shows of solidarity and support. 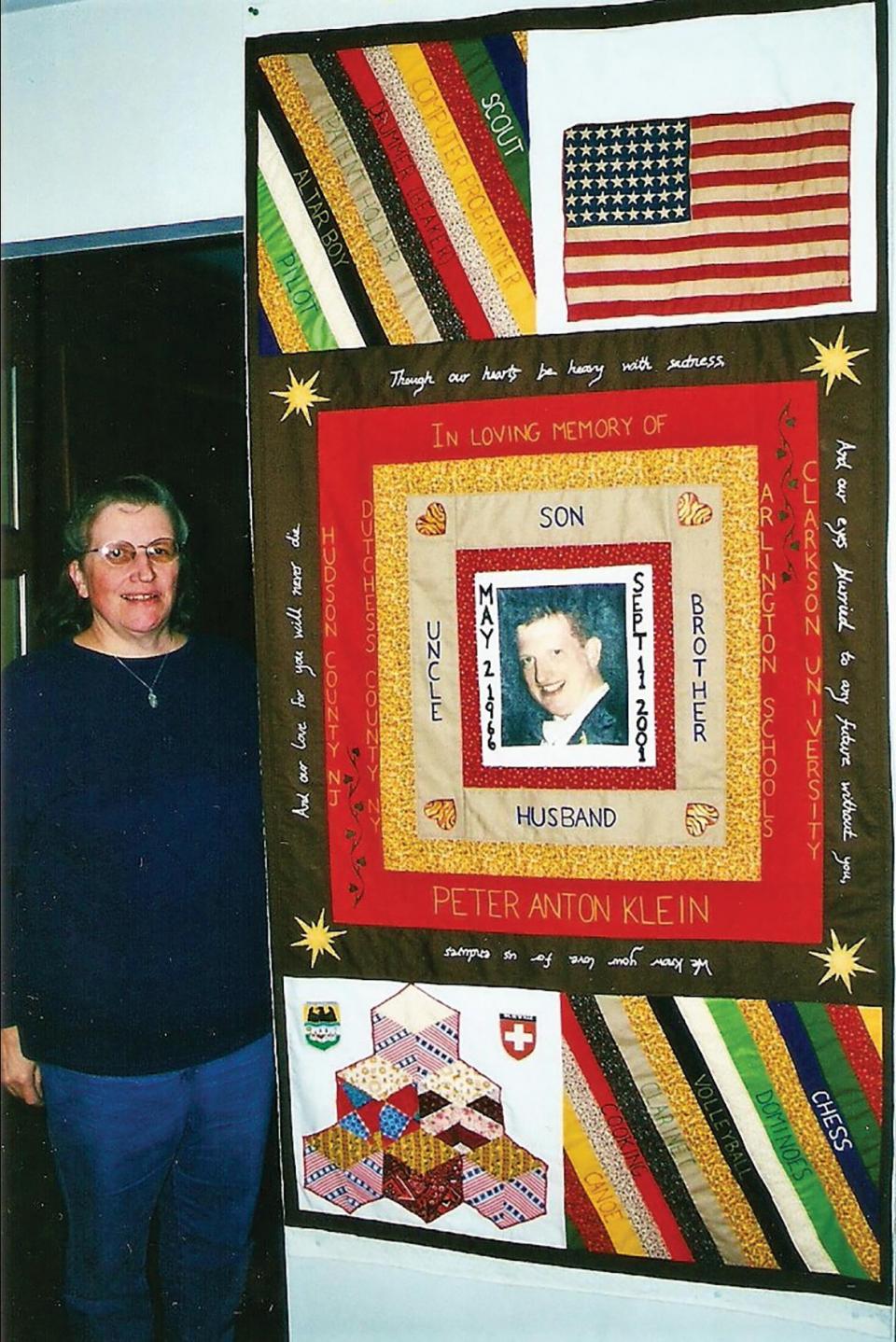 Ruth Klein posing beside the quilt she crafted in memory of her son Peter, who died during the September 11 attacks.

I celebrated an extra mass at noon on the day, and a large number of people attended. I shared some encouraging reflections and even quoted the pope’s message in his Wednesday audience. We sang together Amazing Grace and ended with America the Beautiful.

In the afternoon I visited my friend Hans again, after getting a phone call from his daughter in New Orleans to kindly check on him as he was by himself and emotionally distraught. I spent about two hours listening to him talk about his son, and he somehow calmed down. His family were going to get together in a few days, after they had sent all the information and paperwork about Hans’s absence, including a toothbrush − an item requested by the police to check for DNA in case they could not identify his body (or body parts).

At 7pm, I joined the thousands of Americans in lighting a candle and stayed in front of my church alone in silence. Soon other parishioners joined. It was supposed to be a prayerful time, but it was impossible to control the patriotic exuberance of the many drivers passing by and beeping their horns, while displaying and waving the American flag.

Three weeks later, I celebrated Peter’s funeral mass in our church. His mother had crafted a quilt with his picture and the hobbies he liked, which we displayed at church, besides plenty of flowers. Peter’s loss brought the family closer to God and closer to each other. My homily comforted the whole family, as well as some representatives of the local government who were in attendance.

Next to the World Trade Centre is Holy Trinity church, surrounded by a graveyard. While all nearby skyscrapers were also badly damaged, the cemetery was littered with rubble and debris, but the church remained intact. The metal and concrete of the Twin Towers collapsed but the spirit of faith and the presence of God had survived.

Visiting Ground Zero in mid-October, there were many memorials and items which family members had left along the railing of the church, in memory of their loved ones, from teddy bears to rosary beads, from scarfs to hats and T-shirts, flowers and plenty of photos. A large tarpaulin had quotes and messages in every imaginable language. I added mine: “Il-Bambin jiftakar fikom u l-Maltin jitolbu għalikom.”