“Isn’t it enough that she died? Now you want the money too?” Peter Caruana Galizia asked when he was once again asked to take the witness stand to declare his position in respect of allegedly defamatory writings by his wife. 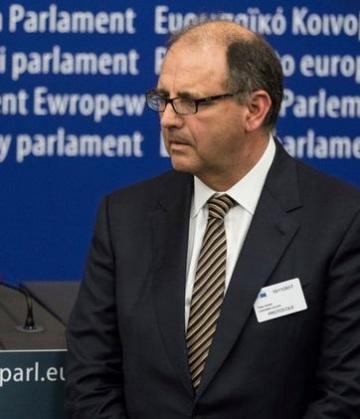 “I’m always hoping and expecting these libel suits to be withdrawn. In the circumstances of the case, I was sincerely expecting the Prime Minister and other Cabinet Ministers to withdraw their cases against my wife,” he said.

He was testifying in an exceptionally crowded courtroom in the presence of, among others, Minister Konrad Mizzi and Chief of Staff Keith Schembri.

Among the listed cases were two libel suits filed by Dr Mizzi last year against the late journalist who had claimed in her Running Commentary that large sums of money had been transferred into his Panama company, Hearnville Inc.

In a blog post, Ms Caruana Galizia had claimed that a company owned by one of the two daughters of Azerbaijan ruler Ilham Aliyev, last year transferred very large sums of money, described as “loan payments”, to Hearnville Inc, Tillgate Inc and Egrant Inc. The transfers had been made by Al Sahra FZCO, a company owned by Leyla Aliyeva incorporated in Dubai's free zone, with Ms Aliyeva as the ultimate beneficial owner, the blog post had claimed.

The payments were made through Al Sahra FZCO’s account at Pilatus Bank, Ms Caruana Galizia had alleged.

“I didn’t write those articles. I stepped into the lawsuits in terms of law, however I’m not familiar with the merits of the case,” Dr Caruana Galizia declared, adding that the articles had first appeared a long while back and although he had probably read them just as other readers read his wife’s posts, he could not recall the exact contents thereof.

Pressed by the lawyer to declare his view on the allegations regarding the money transfers to Hearnville Inc., Dr Caruana Galizia referred to the reply filed by the family lawyer.

“Are you going to continue these cases or are you going to apologize for what was written and request that the suits be withdrawn?” Dr Mifsud Bonnici insisted, prompting Dr Joseph Zammit Maempel, as counsel to the Caruana Galizia family, to ask “Are we going to repeat last week’s charade?”

“I’m not here to beg for mercy. Don’t try to put words in my mouth,” Dr Caruana Galizia rebutted, declaring that he would continue with the same defence.

“Give me proof that the money was really transferred to Minister Mizzi’s account,” Dr Mifsud Bonnici insisted, prompting the retort “You won’t win the case on the strength of my testimony.”

It was then that Dr Zammit Maempel stepped in stating that proof would be presented at the opportune stage.

“Did you ever see proof of these alleged transfers?” Minister Mizzi’s lawyer questioned.

“Where? In the laptop by any chance?” poked Dr Mifsud Bonnici with some tongue in cheek.

“Very funny! I don’t have the laptop. It’s not my wife’s laptop that counts but that of Joseph Muscat and other ministers,” was Peter Caruana Galizia parting shot. The case continues in June.