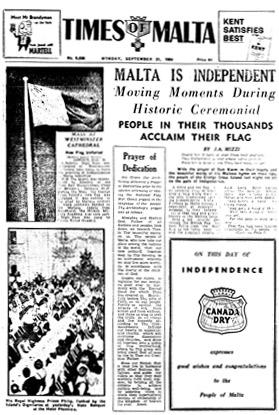 Hugh Hurrell was sad to see the Union Jack lowered but glad that the Maltese were hoisting their own flag with its symbolic cross of bravery on top of a long white mast at the Independence Arena in Floriana, 50 years ago.

“We changed into our uniform at the barracks and we were called to attention in preparation for the Union Jack to be lowered and the white and red Maltese flag to go up.

“I felt sad that Malta, which I was and still am fond of, was being separated from England, but at the same time I knew how truly special that moment was for the Maltese, so I was happy for them,” 74-year-old Mr Hurrell, who now lives in Malta, said.

Just a week short of his 24th birthday, Mr Hurrell was part of the Royal Navy detachment on the parade ground at the Independence Arena during the night of September 20 and the early hours of September 21.

“With the prayers of Dun Karm in their hearts and the beautiful words of the Maltese hymn on their lips, the people of the George Cross Island last night set off on the path of Independence,” The Times of Malta had reported.

Mr Hurrell, who had been here for a brief three-month detachment in 1961, landed in Malta in 1962 as part of the Fleet Air Arm, which is the branch of the British Royal Navy responsible for the operation of naval aircraft, and was based in Ħal Far until 1965.

During his deployment in Malta, where he maintained aircraft engines, cross-country running took him all over the island, including Għajn Tuffieħa, where he returns every year. After 1965, he came to Malta for short visits until 1972 when the British forces started being pulled off the island.

In 1973 he left the Fleet Air Arm and went to Oman as a helicopter engineer and only returned to Malta on holiday in 1987.

But he loved the place so much that three years later he moved to Mellieħa with his in-laws and wife Susan.

“I had enjoyed being here from the very first instance,” he told this newspaper at the Radisson Golden Sands hotel in Għajn Tuffieħa, where together with his wife, he returns every year since they now live in Xlendi.

“The areas we used to cross-train in, Pembroke and Marsa, are mainly built-up now – I remember Marsa was just a grass track,” he said, reminiscing a time when buses were colour-coded.

Asked what Malta was like then, he said it was “very strict Catholic”.

“Although still Catholic, Malta is nowhere near as strict as it was then: older ladies used to be fully covered, usually in black, even when at the beach. And if service wives, who were not aware of these rules, wore anything that showed their shoulders, the bus drivers would stop outside police stations and call for an officer,” he quipped, smiling.

If anyone formed part of the Independence parade or remembers Mr Hurrell and would like to get in touch, they can send an email on scarabott@timesofmalta.com.