BirdLife Malta has issued these pictures, taken last week, which, it said, show three men hunting illegally from a boat well within 3km of shore. The photographer was walking at the top of the cliffs at Ta' Ċenċ. 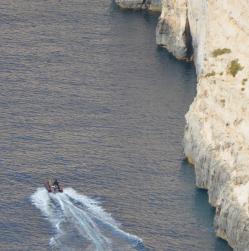 When the men in the boat realised they were being watched, they hurriedly put their guns away and sped off in the direction of Xlendi. MEPA enforcement officers and the police were informed and these photographs have been passed on as evidence.

"Illegal hunting at sea continued with impunity throughout October, with protected birds. from flamingos to kestrels and Scopoli's (formerly Cory's) Shearwaters, being killed by poachers. BirdLife Malta has also received several reports from members of the public who have witnessed illegal hunters shooting at protected birds at sea," the NGO said.

"Despite the numerous illegalities reported since the opening of the season for hunting at sea, BirdLife Malta has received information that the ALE has not had any patrols monitoring hunting at sea," it added.