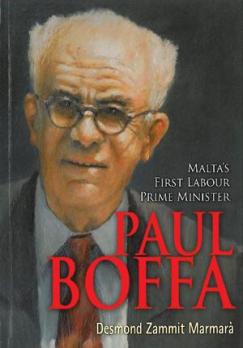 This translation of Pawlu Boffa, published in 2010, is the biography of a man who played a key role in the history of Malta’s Labour Party from its early days in the 1920s until 1950.

Boffa’s star shone until then, when he was eclipsed by the relentless opposition of a young man who was to make a much greater mark on the party – and indeed on the constitutional, social and economic development of this country – Dom Mintoff.

Many Maltese nowadays know little of him, though most will know Vincent Apap’s massive bronze statue of him in Valletta.

Paul Boffa was born in Vittoriosa in 1890 of very religious and hard-working parents. His father worked in the Admiralty Dockyard, but his bright young son was able to study medicine at our University, qualified as a doctor, and began to practise his profession in 1913.

Though he was, like his parents, a strong believer, for a good many years he was a socialist of the British type.

The Labour Party took this intelligent and idealistic young man to its heart and he was elected to the Legislative Assembly in the 1924 elections held under the 1921 constitution.

As a parliamentarian he soon made his mark and his membership of a Labour Party commission set up to reorganise the party helped to speed him on towards the leadership.

He must have played an important role in leading the party to enter into the famous 1926 compact with the Constitutional Party which enabled Lord Strickland to assume the government in 1927. Labour did poorly in these elections but Boffa was re-elected and was appointed to the leadership the following year.

During the compact years, although Boffa did not have a cabinet post, the Constitutional/Labour coalition passed the Workmen’s Compensation Act in 1929, a first step in the defence of the worker.

That same year it also passed the Rent Regulation Act, a law that protected tenants against greedy landlords, but was to prove a great burden to landlords for many years until nearly our own times.

During this period, Boffa distinguished himself by his defence of the Maltese language. Zammit Marmarà does well to reproduce in full the spirited letter written by Boffa to the newspaper Il Cotra, attacking Enrico Mizzi and his party for regarding the country’s native language as grossly inferior to Italian.

In the 1930s, Boffa reorganised the party, but began to show signs of losing his early socialist ideas when him and his family, not to mention his party, began to suffer socially as well as politically. This was following the Maltese Church’s pastoral letter in 1930, declaring it a mortal sin to vote for the Constitutional Party and also for the party supporting it – Labour – in the forthcoming general election.

Labour suffered as a consequence of Strickland’s fiery clashes with the Church, and in 1932, he was the only Labourite to be elected.

This was repeated in 1939, when elections were held for the Government Council; by this time the 1921 constitution had been abolished.

This creeping clericalism, added to Boffa’s being on excellent terms with Governor Bonham Carter, was unpalatable to the hardcore Labourites, but, as the author says, it was Boffa’s pragmatism and cautiousness that prevented the Party from being destroyed altogether.

During World War I the newly qualified Boffa did much voluntary medical work with servicemen in Malta and even in Salonika.

In the 1939-1945 war, he distinguished himself by his selfless and courageous work to save and cure people injured in the terrible bombing, particularly in 1941 and 1942.

In addition, he was District Commissioner for Cottonera and a number of other villages. His record made him greatly beloved and cancelled for a time the unpopularity he had been attracting in the late 1930s.

In 1942, however, as a member of the Council of Government he made one of the most debatable acts of his life when he supported a motion to deport the pro-Italian sympathisers who had been interned in 1940.

Here, his loyalty to the colonial government blinded him to the injustice of deporting fellow-Maltese people at a very dangerous moment of the war.

As the war ebbed from Malta’s shores, politicians began to think once more of a new constitution. Boffa played a leading role in the National Assembly that was set up to propose constitutional measures, and his party took a crucial step: the creation of a Labour front consisting of the Party and the recently created General Workers’ Union, a front Mintoff was to use so effectively later on.

Upon being elected prime minister in 1947, his job was no easy one as post-war Britain was quite impoverished.

However, Boffa’s achievements in the first years were significant: old age pensions were introduced, the minimum wage, working hours were improved, and big efforts made to reduce illiteracy.

Together with his Minister of Finance, Arthur Colombo (who did not get on well with Mintoff) Boffa was desperate to make Britain fork out more funds. Mintoff, the rapidly rising star of the party, wrote: “Malta is lost if we do not fight ferociously, fearing nothing and nobody.”

Mintoff held talks in Britain independently of Boffa, who now feared him. And rightly so, for disagreement regarding policy between them was great.

Mintoff now had achieved so much control of the party that in October 1949 Boffa was removed as party leader, with Mintoff replacing him. Boffa held on to his Prime Minister’s office, but in 1950, had to resign following a vote of no confidence in Parliament.

Boffa went on to create the Malta Workers’ Party, eventually and unwisely joining a coalition government led by the Nationalists.

This was brought down when one of the MWP members resigned, robbing the government of its majority.

The last sad act was written when Boffa’s request to re-join the Labour Party, after dissolv-ing the MWP, was grudgingly accepted, but he was not allowed to contest the 1955 election as a Labour candidate.

For those readers who look for a more detailed account of the period’s political complications, and sometimes a clearer chronology than that given in the book, I would advise a work like Joseph M. Pirotta’s Fortress Colony Vol. 1 (1987).