A smashed goldfish bowl, panicked birds in a cage, scores of animals needing treatment. The loss or injury of treasured pets has added to the grief and trauma of Gaza residents after last month's deadly conflict.

Neriman, a nine-year-old Palestinian girl, clutched a glass jar holding her goldfish Hoor, delighted it had survived after her other one, Hooriya, died in an Israeli air strike in Gaza City.

In the latest war, Israeli strikes on Gaza killed 254 Palestinians, including 66 children, as well as some fighters, authorities there say.

Fire by Palestinian militants claimed 12 lives in Israel, including one child, a teenager and an Israeli soldier.

Pets also suffered, as well as the children who owned them. 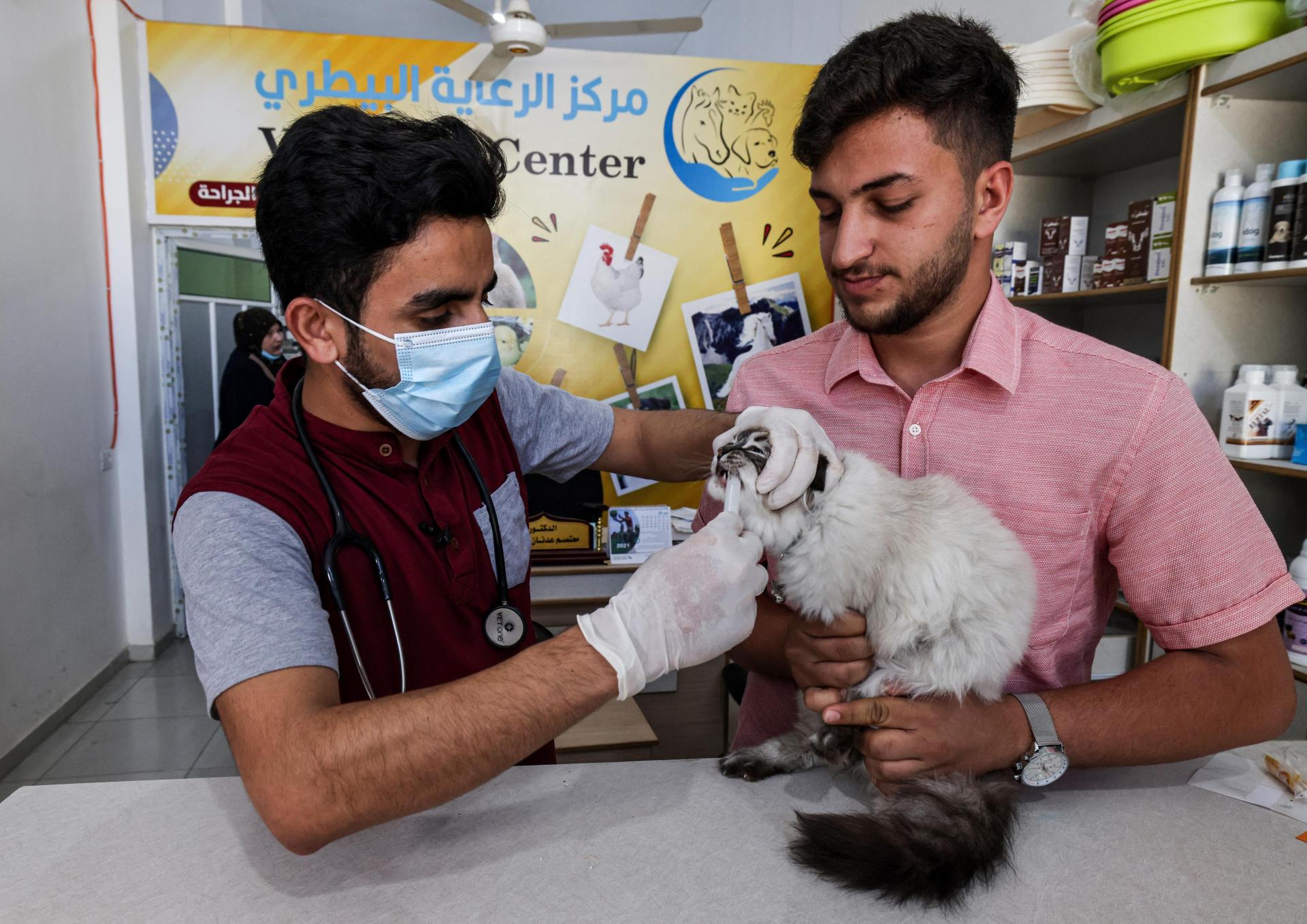 Palestinian veterinarian Mutasem Qaddoura examines a cat at a clinic in Gaza City.

"I was so sad that Hooriya died and I cried when I buried her in the field," said Neriman, of her first fish, whose name meant "Mermaid" in Arabic.

"But I was so happy that Hoor had survived," she added of her second fish.
At an animal clinic in Gaza City, Amani Abu Shaaban held a fluffy cat to her chest as they waited to see a vet.

"My cat has been very scared since the war. She refuses to eat, and her hair is falling out," she said.

"Even the sound of a mobile phone ringing freaks her out."

Nearby, vet Mutasem Qaddoura examined two cats, one after the other.
One needed an operation for a broken leg, the other was dehydrated and malnourished.

Dozens of pet owners have flocked to his clinic since Gaza's May 21 ceasefire though supplies to treat them are scarce.

"The state of veterinary medicine is disastrous in Gaza," Qaddoura said.
"We use X-ray machines intended for humans and platinum screws meant to fix children's bones to treat the animals."

Neriman and her family had been forced to flee their home on May 13, after an Israeli officer warned neighbours of an imminent strike on a nearby bank.

In the panic she left behind her fish, as well as two parakeets, Alloosh and Malloosh, given to her by her father for her sixth birthday.

Israel's latest war on Gaza has killed hundreds and injured thousands but it has also heaped suffering onto the region's animals, and in some cases the children who own them. Video: Yahya Hassouna/AFPTV/AFP

But soon after, she started worrying.

"I just had to go home with my father to get them," she said.

When they returned, she found a special outfit she had laid out on her bed for the Eid holidays covered in rubble, the bed collapsed and the windows blown in.

"I heard Alloosh and Malloosh chirping under the rubble, and I found the fish bowl broken," she said.

Hooriya had died, but they saved Hoor, a scene shown in a video that has since gone viral on social media.

South of Gaza city, 30-year-old Adel al-Wadia said he had tried to feed some of the dogs at the coastal strip's main dog shelter during the bombing.

"They were howling with fear and hunger and it made me sad, so I risked trying to get as close as possible to give them food," he said.

The shelter's founder, Saeed el-Aer, said he returned after the ceasefire to find many of his canine wards scared and famished.

Dozens had panicked and escaped during the 11-day war, and several were wounded, he said. 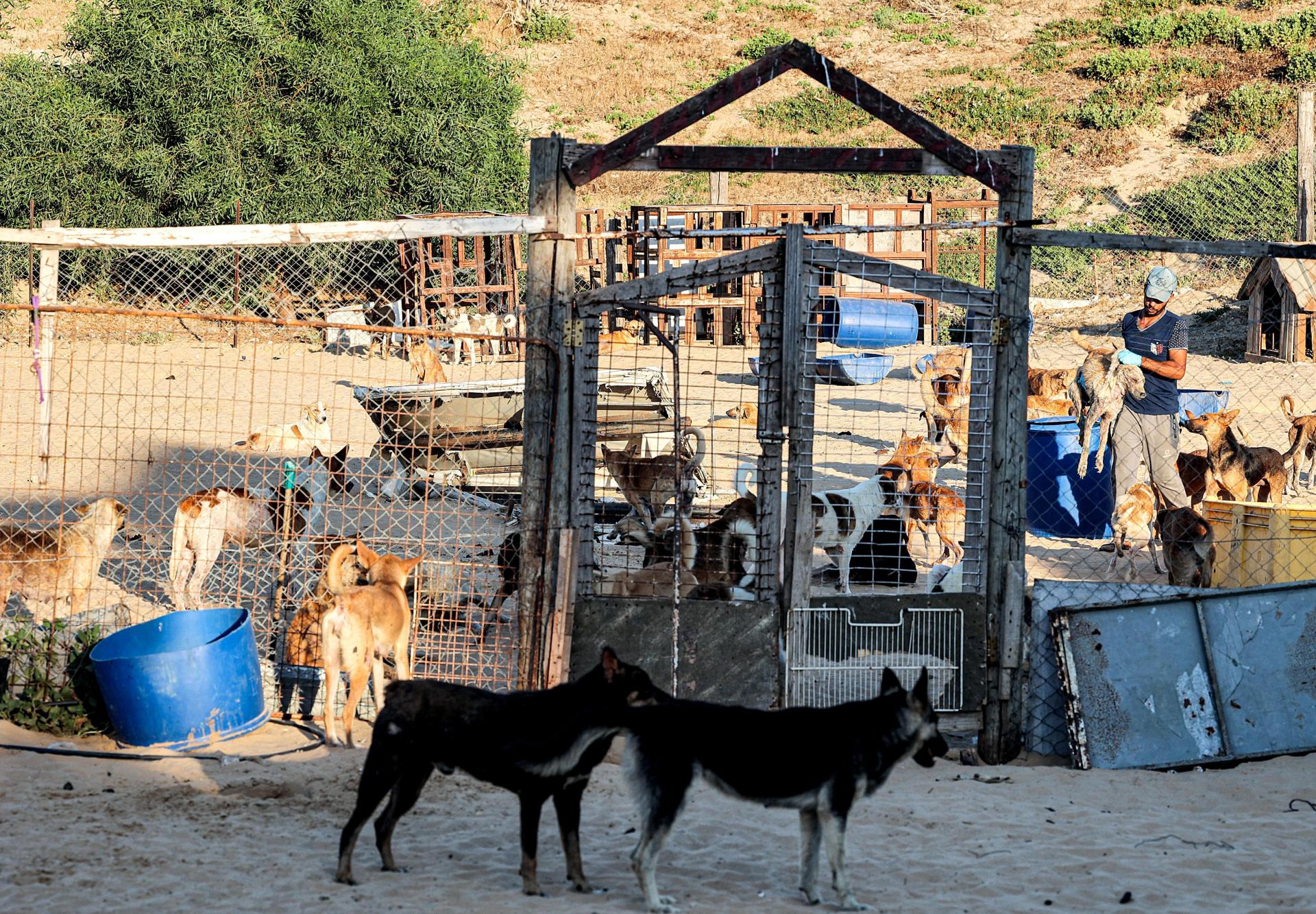 A general view of the Sulala dog shelter in Gaza City, that has received several wounded animals due to the 11-day conflict between Israel and the Islamist Hamas movement.

"At least three dogs need an operation, including one who needs a paw amputated," he said.

Other animals were even less lucky.

Aer pointed to an area beyond the shelter's fence.

"Over there, we buried the donkey and the horse after we found they had died from shrapnel wounds," he said.