Come rain or shine, you’ll see them trudging across Żebbuġ on Friday mornings, filling garbage bags with all sorts of rubbish they come across.

A group of friends have for the past year been voluntarily collecting litter from the town once a week, in a bid to keep the locality clean and raise awareness about the trash problem plaguing Malta. 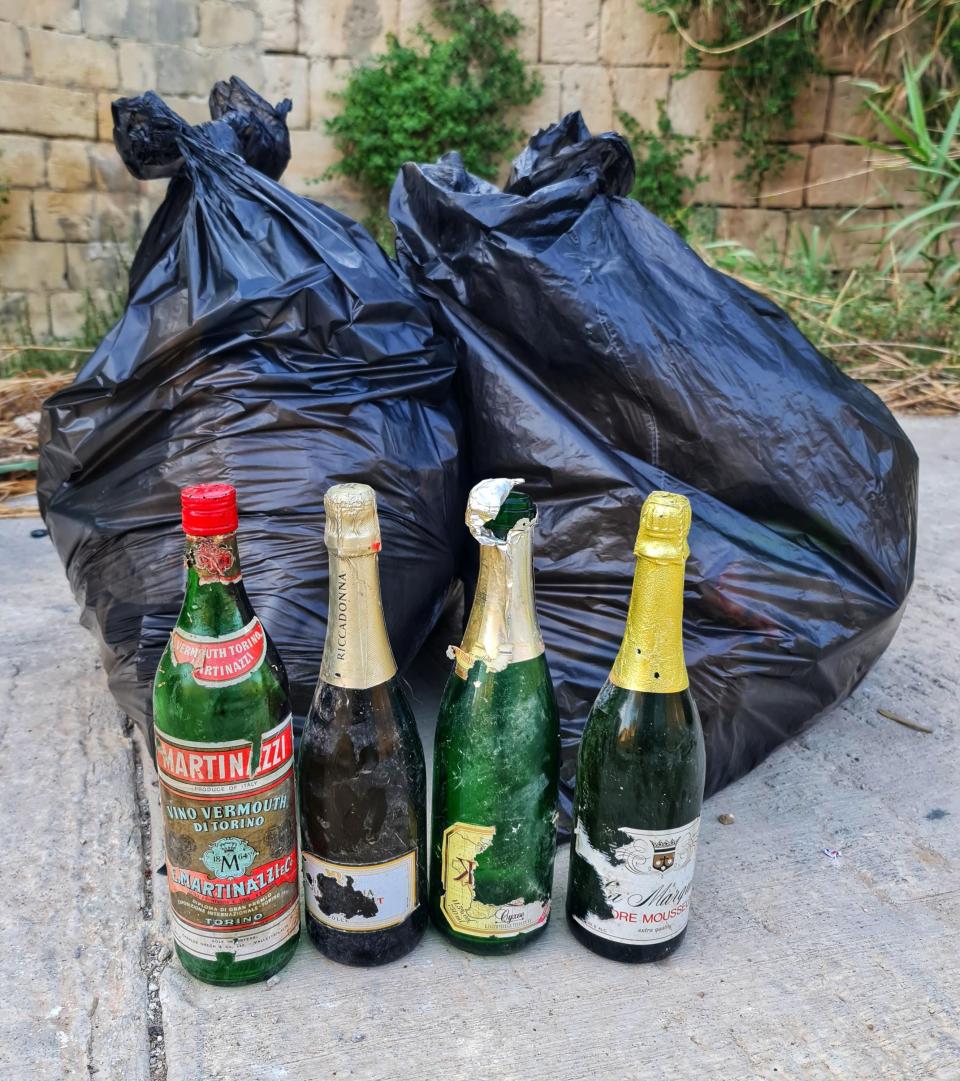 Some of the rubbish collected from Żebbuġ and its outskirts ­– from plastic bottles and empty tins of cat food to furniture and tyres. Photos: Eman Azzopardi

The initiative, which they named ‘Giving Back Fridays’, started casually on July 3, 2020. Nature lover and trekking enthusiast Eman Azzopardi had been noticing a lot of trash lying around the paths where he used to go walking or jogging every morning.

“On that Friday, I decided to do a small clean-up and from a short stretch I managed to collect two bags of trash. I could have collected more but I couldn’t carry more than that. I posted this online and the feedback was positive. I kept doing this every Friday and, after a couple of times, some friends started joining me,” Eman, a social worker, says. 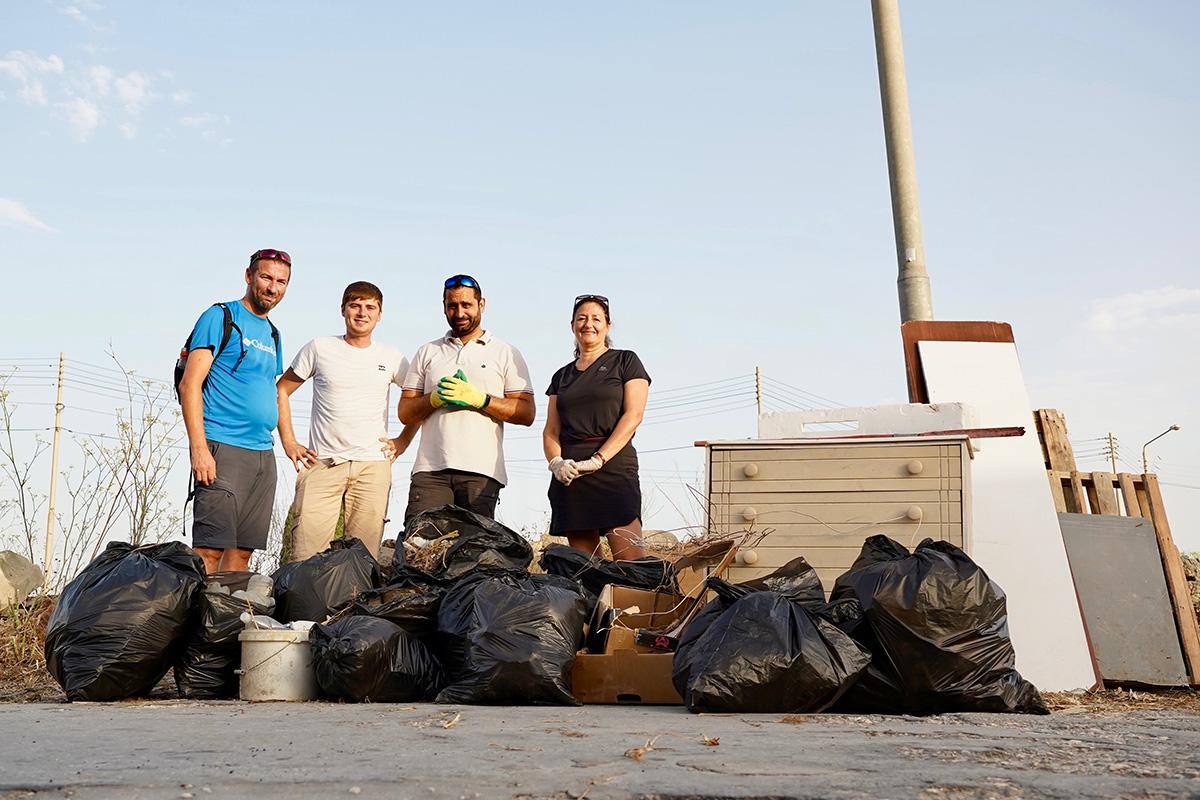 The group comprises Marianna Micallef Grimaud, a school counsellor and teacher, John Chircop, an IT programme manager, Steve Zammit Lupi, a videographer and a member of the Żebbuġ local council, and Sandra Azzopardi, an HR manager.

“We mostly collect rubbish from the outskirts of Żebbuġ but some areas, say close to industrial operations, seem to be more prone to littering than others,” John says.

Among the most common items they come across are plastic bottles and other single-use plastic packaging.

“This is a real problem,” Marianna points out. 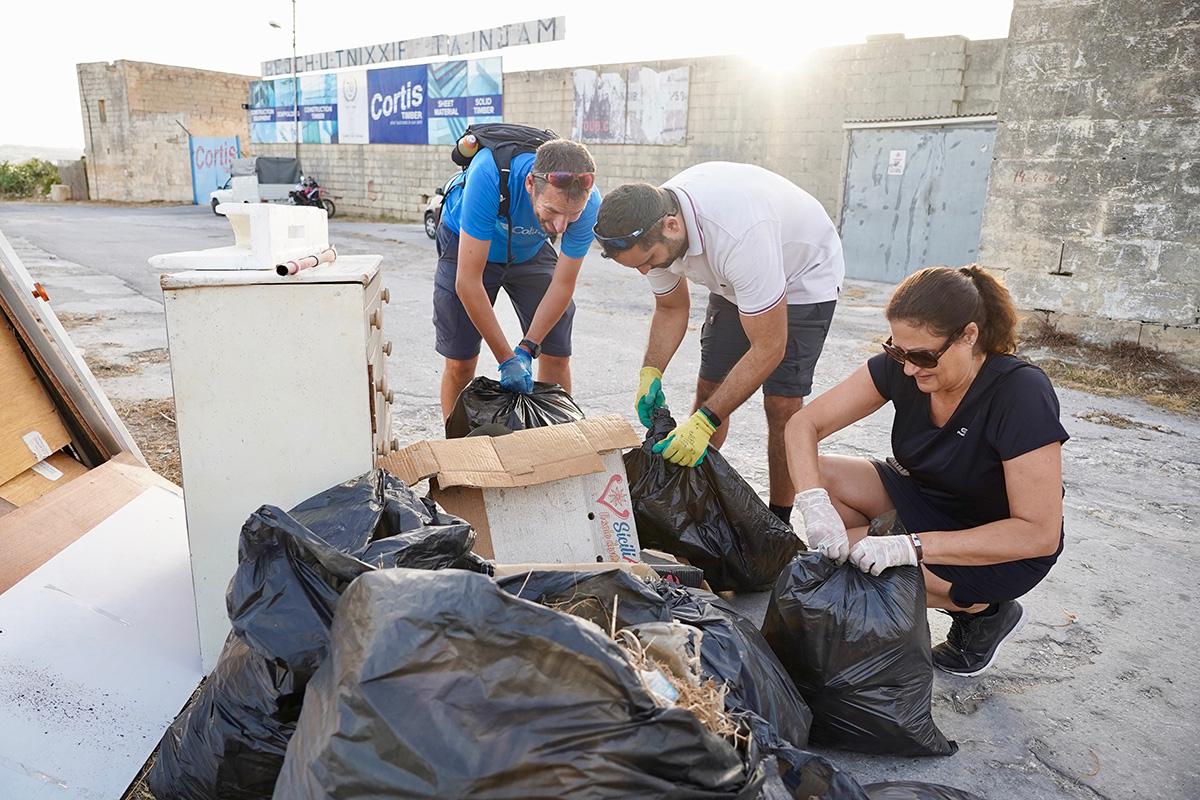 Other very ordinary items they regularly pick up are bottle tops, takeaway containers, jablo pieces, disposable masks and empty tins of cat food. But they have also retrieved shoes, toilet seats and clothes, among other objects.

“On one occasion, we found a full wardrobe of used clothes, in good condition, neatly folded and tucked away behind a bush. They were probably destined to some charitable institution and, somehow, ended up dumped off the side of a road,” Marianna recalls.

The group often questions how people still litter streets, valleys or the coastline despite the various ongoing environmental awareness campaigns.

“We keep debating this argument, time after time. Maybe some do not care, maybe others have no sense of pride in their country, perhaps others are simply too lazy to hold on to their garbage until they can dispose of it properly. 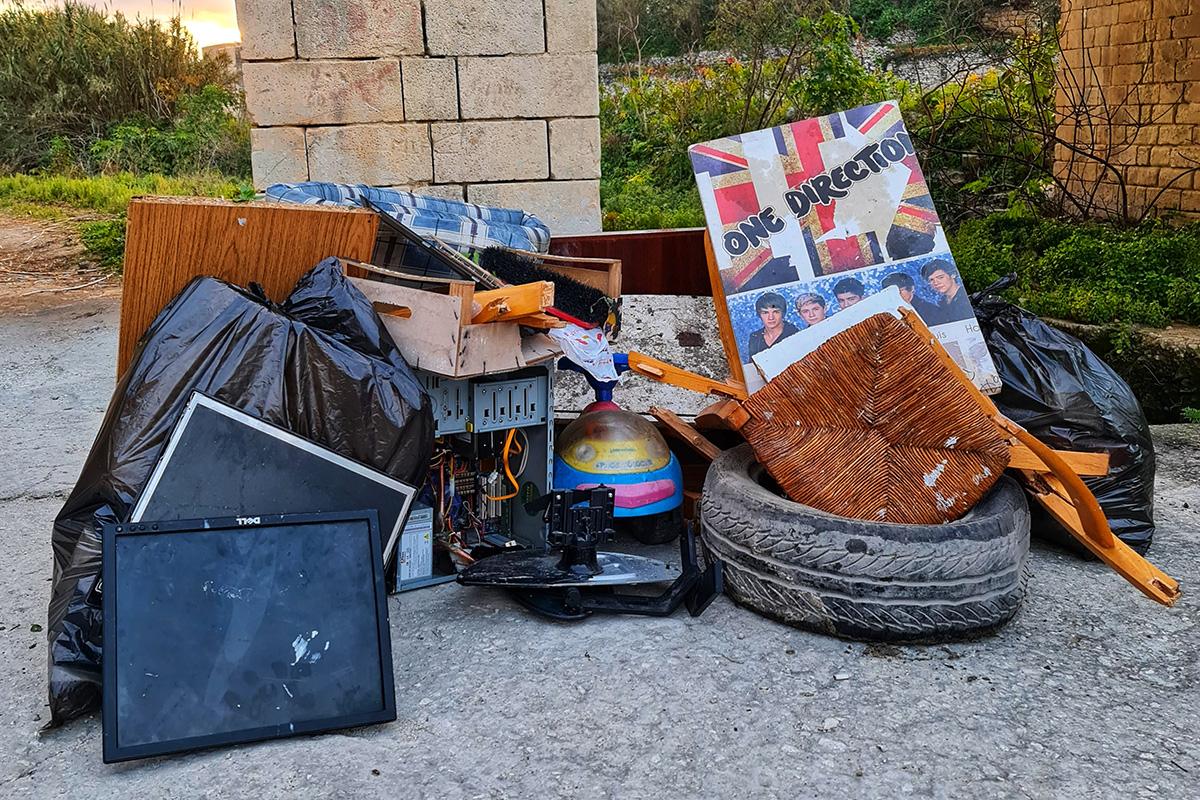 “To be honest, it is a question that can lead to feeling dispirited, so I like to focus on getting on with my little part and not linger too long on excuses,” John says.

He notes that he’s actually not from Żebbuġ and admits that it does feel like an “uphill struggle” given the amount of litter encountered every week. But he gets satisfaction from conquering those “inner voices” telling him not to bother anymore and persisting with the idea that every drop counts ­– “gesture over results”.

“If our modest actions incentivise more people to do likewise, we will witness the birth of a movement with the ability to make real change. That’s my hope. Complaining is easy and useless. It’s small actions that make the difference,” he says.

When Eman posts photos of the bags of the garbage collected on his Facebook page, the group gets an assortment of comments. Some people applaud their efforts and urge them to keep going while others write comments on the lines of “it’s all a waste of time” or “it’s not you who should be doing this work but the local council/government employees”. 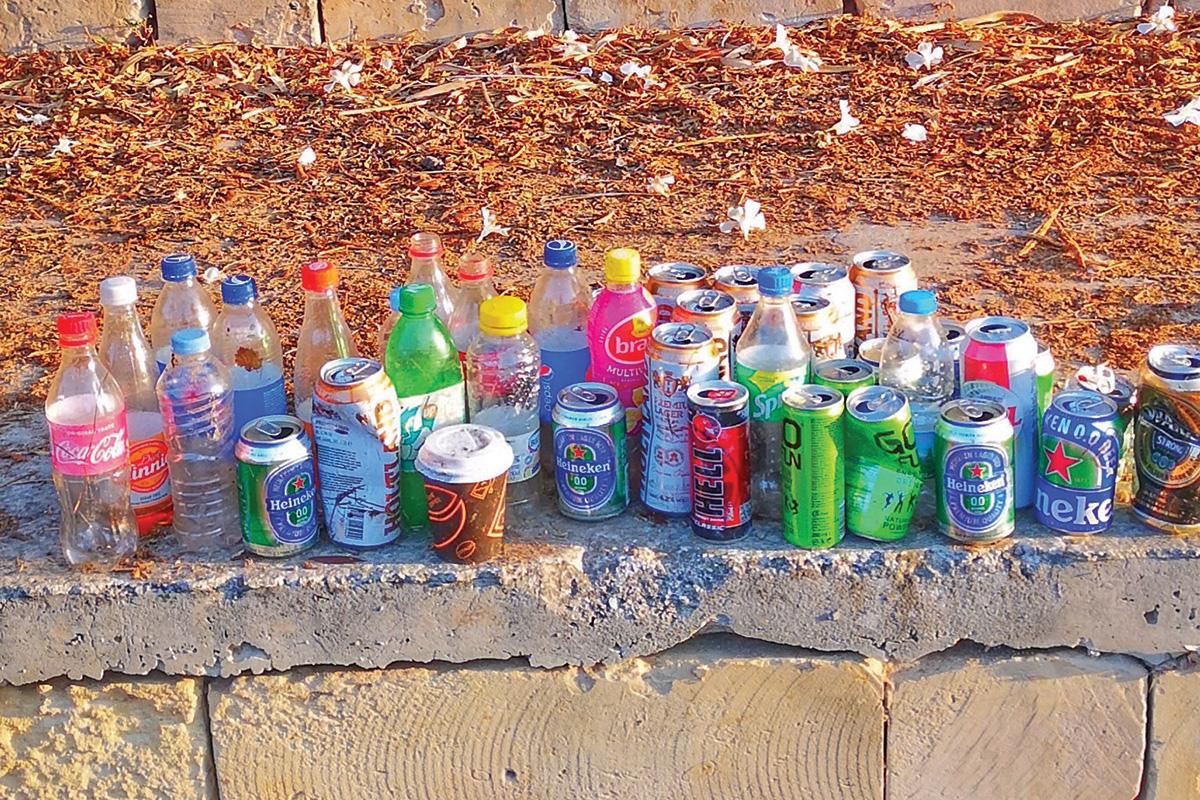 Marianna is, however, unfazed by such negative thoughts and hopes that their selfless act will inspire others to follow suit in other localities.

“I feel that this is my way of contributing to raising awareness about the environment. This is really important to me and I hope that others will be inspired to come and help too.”

John goes on to say that it is time to stop pointing fingers at institutions, governments, brushing off responsibility and complaining on social media but not actually doing anything concrete about the problem.

“As hard as it is to accept the injustice that a few irresponsible people keep littering, undoing any clean-up work, regular small tokens of effort by many people will make a significant difference,” he enthuses.

“Litter is everyone’s problem, not the government’s, not the local councils. We need to shoulder responsibility for it as a community. Our modest actions are a different, more hands-on means of education. It is impossible to attend a clean-up event and not feel appalled at the amount of waste dumped, at the volume of single-use plastics found. One walks away with a much clearer picture of what a big issue litter is and becomes more conscious about the problem, in turn encouraging others to do their bit.” 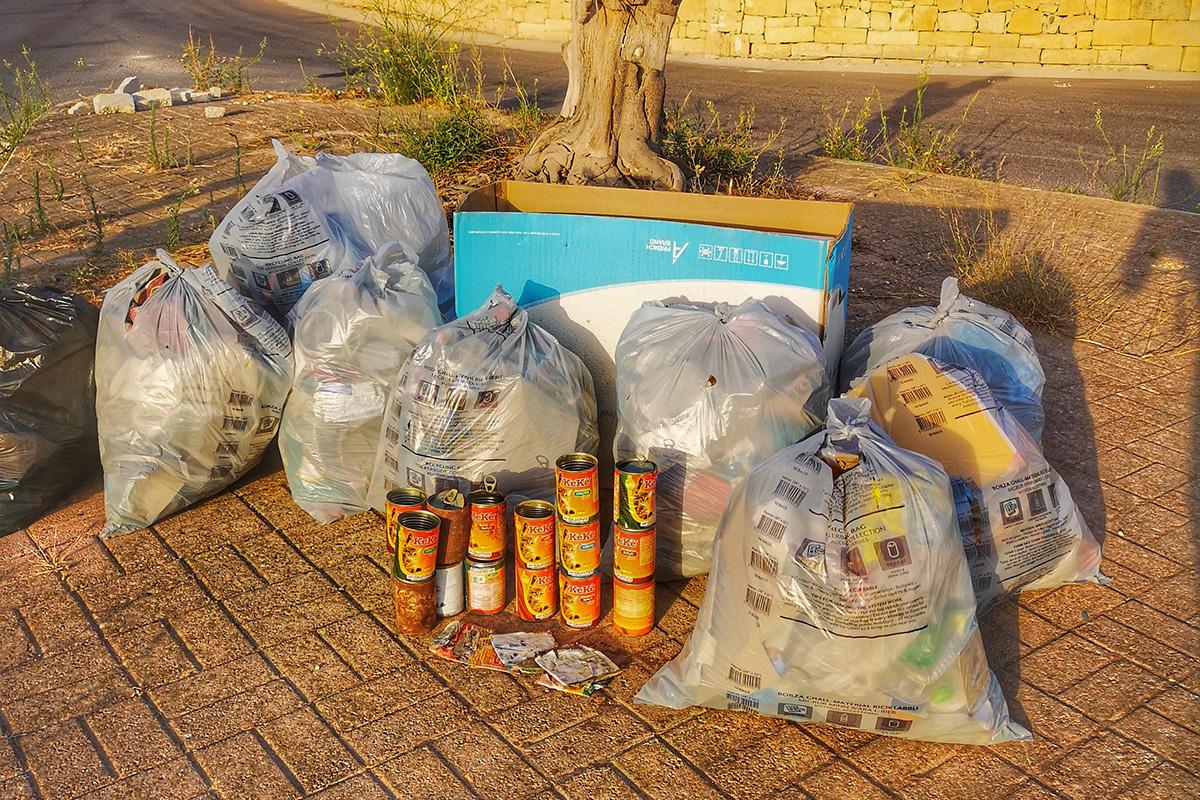 “I think everyone needs to remember that we’re all responsible for the environment and its cleanliness. It is no use complaining about wanting more green areas and more countryside if we are not willing to do our bit to make it better. We need to take responsibility for how our country looks. We want future generations to be able to enjoy the outdoors, the countryside and the sea. And, for that to happen, we need to take charge of what happens to the litter that is thrown away,” she says, and suggests an experiment.

“Next time you’re going for a walk, just take a bag with you and a pair of gloves and pick up any litter that you come across. When you go back home, put that bag down and take a good look at it. You will soon realise that, most likely, it will be full of litter and that’s one less bag of litter in the countryside, thanks to you. Just imagine how clean this country could be if we all took the time to do this.”