The population of Malta increased by 15,700 in 2017, over 15 times the rate in the EU when adjusted for the size of the population.

This brought the population up to 475,700, according to the EU's statistic arm Eurostat.

The 1.1. million growth came from migration, Eurostat said on Tuesday as there were more deaths than births (5.3 million deaths and 5.1 million births) and without migration, the population would actually have shrunk.

Read: 43,000 foreign workers in Malta, and more are expected

Prime Minister Joseph Muscat had said that if Malta is sustain its economic growth it needs an influx of foreigners.

Consequently, Ireland (with a natural change of its population of +6.6%) remained in 2017 the member state where births most outnumbered deaths. 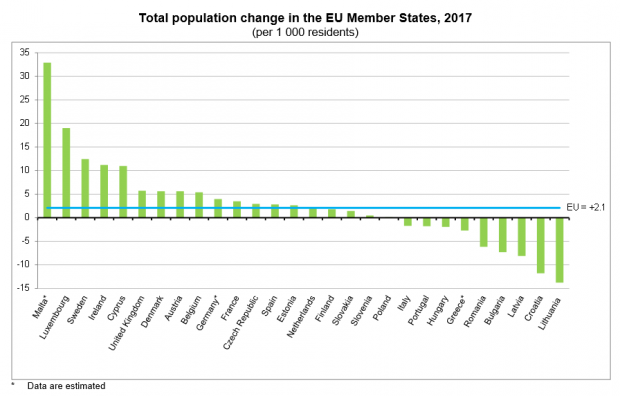 In a statement in the afternoon, the Nationalist Party said the figures continued to show the need for transparency by the government when it came to its economic migration policy.

It said that a reasoned dialogue on migration that was based on numbers and facts was needed for the country to avoid an emotional issue which would not lead anywhere.

The most recent GDP figures, the government said, showed that, in real terms, this had gone up by 4.4% in the past 12 months. But if one wanted a real picture of the average head to head growth, one had to take off the number of economically active population.

If this was done, it would reflect what many people were feeling, that growth head to head was much lower than what the government claimed because it was coming from population growth and not from a head to head increase.
Eurostat figures published in April, the PN said, showed that wages increases in Malta last year had barely covered the cost of living. And in the previous year, the increase was even lower.

Population growth had also put pressure on a number of sectors, especially in a small country such as Malta which was already suffering from the highest population density in Europe.

The people were feeling the pressure on the environment, infrastructure, roads, traffic, public transport and rents, among others. Rents had gone up so much that they had even become a threat to new sectors such as gaming as the industry was not finding places at reasonable rates for its foreign workers. This was apart from the major social threat for the Maltese who needed to rent their home.

The PN said it believed the migration issue was not one of if but of which kind and how many.

Immigration in the national interest would see in Malta foreigners who were capable of teaching and training the Maltese in new industries.

A country open to Europe and the world would surely attract a number of foreigners, especially since the Maltese knew a number of languages.

But unplanned migration aimed just at blowing up economic figures would mean, once the bubbles burst, hardship for both the Maltese and foreigners in Malta.