Hydrologist Marco Cremona has been shortlisted as a finalist for the most prestigious environmental award in the world – the Energy Globe Award – for his innovative idea of using boreholes to channel rainwater directly into the ground.

The technology, known as GEO-INF, which Mr Cremona has been working on for the past four years, seeks to meet the dual objectives of enhancing groundwater reserves while solving the problem of flooding.

It consists of a sustainable urban drainage system that channels rainwater falling on roofs into the groundwater.

Malta’s groundwater continues to be pumped at a rate well above the natural recharge rate, resulting in the island’s aquifers being slowly invaded by seawater.

“It’s rather ironic how such a rare resource is going to waste into the sea,” Mr Cremona told Times of Malta. 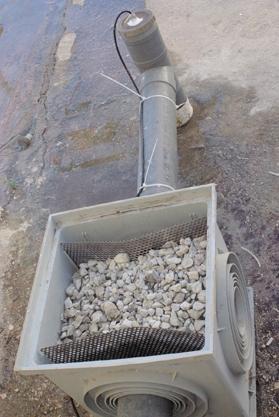 “Technically, there is a law stating that all houses should be equipped with cisterns or wells. But this law hasn’t been enforced. Instead of pumping water from the aquifer as conventional boreholes do, the project injects run-off water from roofs into the ground.”

The technology operates through a system of water pipes which diverts rainwater off the surface of roofs down into a water tank at ground level.

Water then passes through a filter, where it is purified from leaves and other coarse particles before being directed into the ground by a borehole.

The system has been installed in 10 schools across Malta.

Mr Cremona explains that the large roofs of schools and government buildings are ideal for the project, since they are free from activity such as hanging up the washing or keeping animals.

He has also assessed the pollution load of atmospheric deposits (dust and any other particles) which gather on roofs in Malta.

“I first thought of including a filter to absorb the pollutants. But I discovered that the first rainfall of the season serves to clean the roof.

“So, for instance, the first September rain would wash away three months’ worth of deposition.

“In light of this, it makes more sense to install an automatic or manual valve to stop the first rainfall from being diverted into the borehole.”

The project is a cost-effective one, costing between €1,000 and €1,500 in comparison with the €6,000 needed to construct a proper well handling the same amounts of water.

“GEO-INF won the Malta Innovation Award 2014 last month but I was thrilled to be informed I was in the running for the international award.”

Project partners include the Department of Civil and Structural Engineering within the University of Malta, Solid Base Laboratory Ltd, the Malta Resources Authority (MRA) and St Theresa’s College.

It is part-financed by the Malta Council for Science and Technology’s Research and Innovation Programme 2011. Results of the award will be announced later.