Close your eyes and let yourself be transported 140 years back in time... to Malta of 1881, less noisy, less crowded, less polluted. And to Rabat, in particular, where some workers are planting trees at what we now know as Howard Gardens.

A spade digs into the soft soil but makes a jarring sound when it hits a hard surface instead. Startled, the workers stop and alert their superiors, unaware of the marvellous discovery that will unfold with that spade’s thud. The Domvs Romana, buried for centuries with all its treasures and all its secrets, is about to be exposed...

Almost a century-and-a-half later, I am gazing in awe, for the umpteenth time, at the mosaic adorning the Domvs’s peristyle while listening to David Cardona, senior curator for Phoenician, Roman and medieval sites at Heritage Malta, describing how our national cultural agency is commemorating the Domvs’s anniversary.

This is a threefold celebration because 2020 marked 100 years since Sir Temi Zammit started excavations at the Domvs, 2021 marks the 140th anniversary of the Domvs’s accidental discovery and 2022 will commemorate 140 years since the Domvs was opened to the public as a museum.

As Cardona recounts, following the incident during the tree planting at Howard Gardens, Antonio Annetto Caruana, the librarian of the Bibliotheca and curator of the archaeological collection housed in it, was entrusted with the investigation. Most of the areas of this rich Roman townhouse were discovered then and a museum was built to protect the mosaics and house Malta’s Roman antiquities.

This incision depicting Antonio Annetto Caruana’s excavation was published on the front page of the British weekly newspaper The Graphic on June 25, 1881. 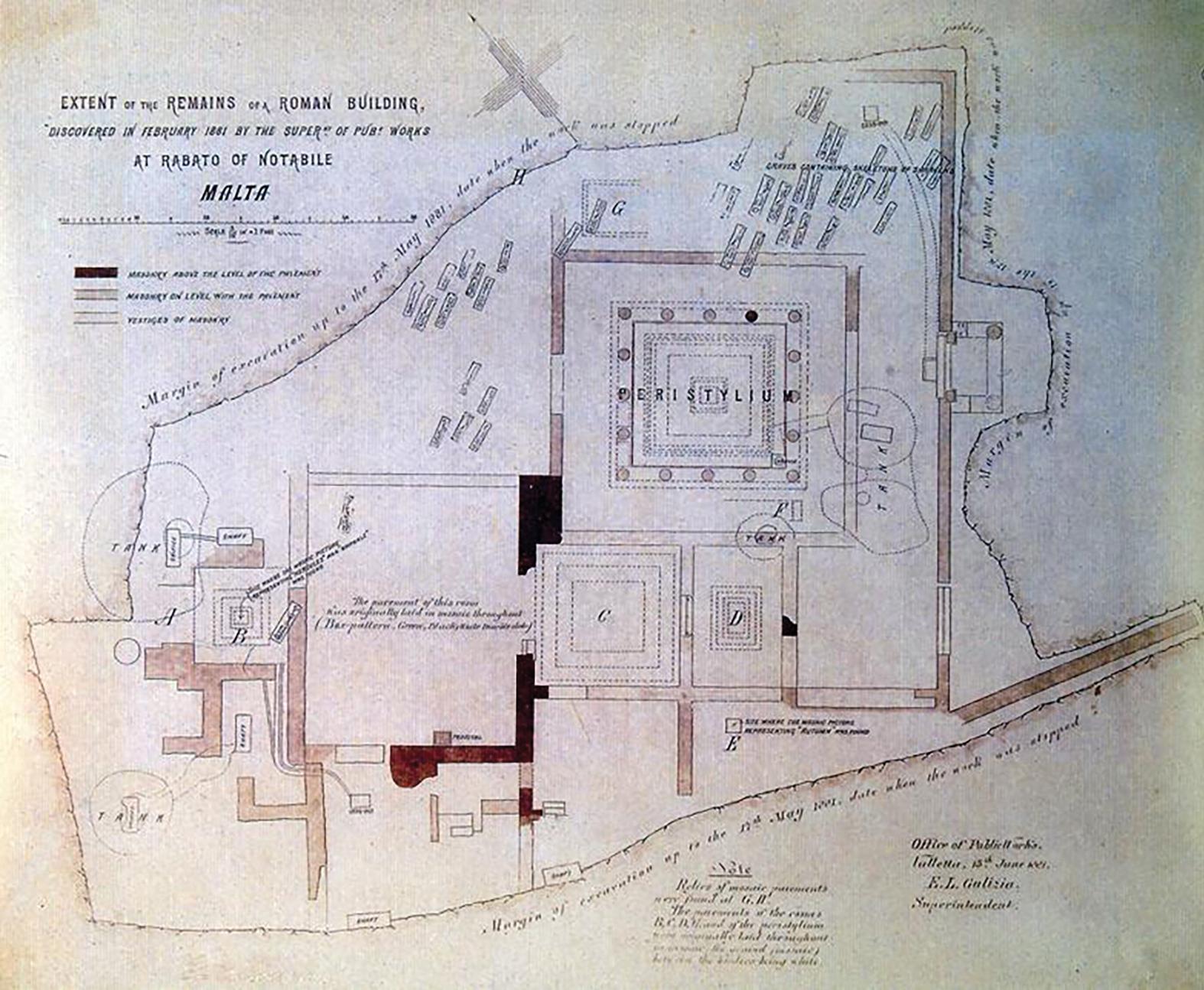 A plan showing the remains uncovered by Caruana in 1881.

Unfortunately, a strip to the north of the site was destroyed when the British services cut the road leading to the Museum Railway Station in 1899. No records were kept of these works and, probably, a good portion of the house, as well as other surrounding structures and tombs, were completely lost.

The site underwent further investigations in 1920-25 by Sir Temi with the help of Robert V. Galea, Harris Dunscombe Colt and Louis Upton Way. Works extended in all directions of the site and uncovered a substantial number of Islamic burials above the remains of other small Roman houses.

What we see today when we visit the Domvs is a far cry from what this luxurious dwelling must have looked like in its heyday, roughly between the second half of the first century BC and the first half of the first century AD. We are probably wandering through just a fourth of the space that the house occupied in all its glory, thus enjoying only the entrance, the peristyle and the triclinium or dining room.

What historians can deduce quite accurately, however, is that this was no humble abode. This was the home of someone wealthy enough to be in the top social stratum, someone with high social connections in Rome, as evidenced by two statues showing members of Emperor Claudius’s family carved in fine marble. 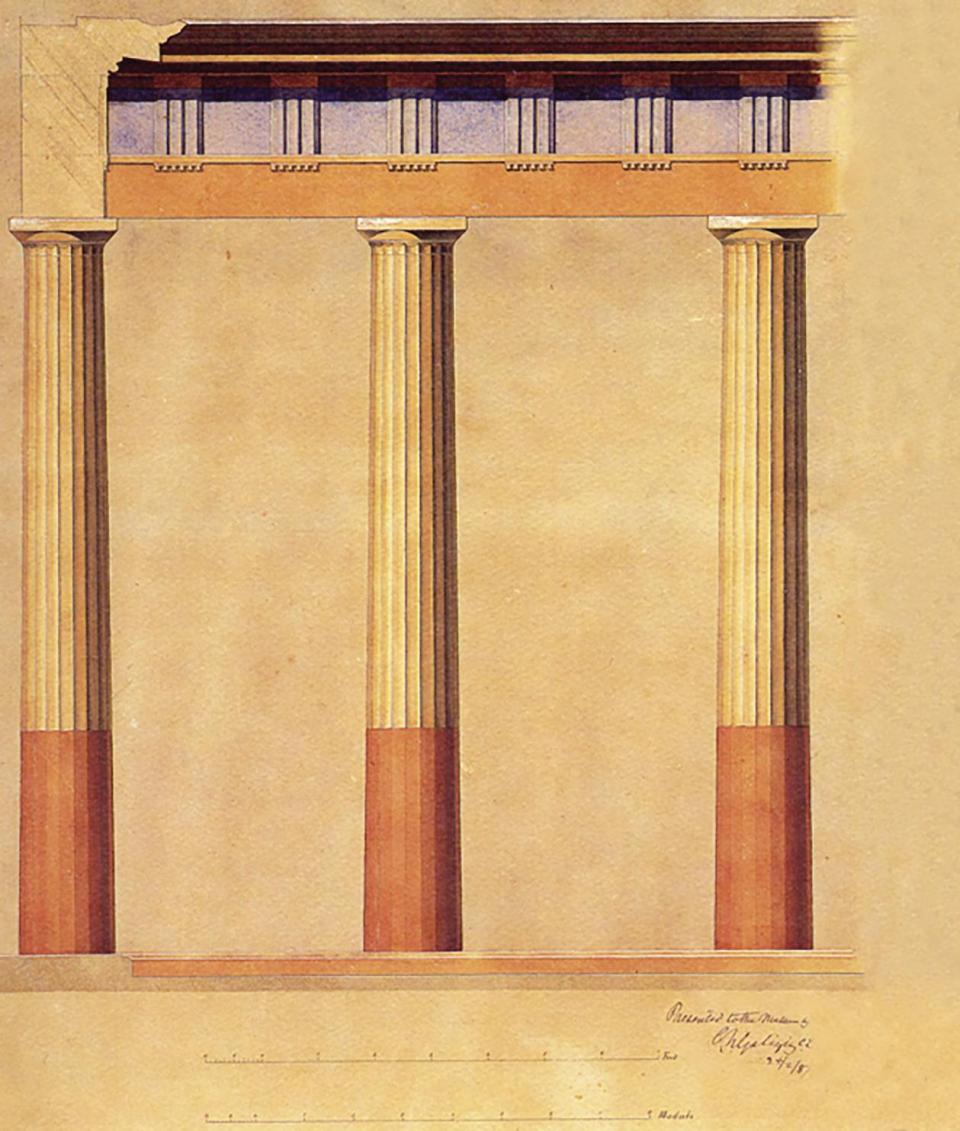 A reconstructive drawing by architect Galizia of the colonnade around the peristyle.

The discovery of imperial statues in a private house is a very rare occurrence in the Roman world and is only known in a couple of other occasions. This seems to imply that the owner of this Domvs may have been an important public figure, possibly even the governor of the island. Whoever he was, he went into a huge expense to show his loyalty and piety to the ruling imperial dynasty.

‘He’ is a key word when describing life in a typical Roman household. The father (pater familias) was the leader and had absolute power over the house, the land and anyone living in his household. He had the authority to punish, kill, abandon or sell as slaves any member of his family without explanation. The daily duties of the pater familias varied according to his profession and status within society. For an aristocratic man, mornings were usually spent receiving visitors who passed by to pay him homage or do business. Afternoons were usually dedicated to resting (otium), a visit to the public baths or feasting.

A woman (matrona) had very few rights and always depended on her husband or sons. However, women played a very important role in the house as they took care of the children’s education, which was conducted at home, and organised all the daily domestic duties performed by the slaves.

The exhibits at the Domvs Romana provide a good glimpse into the everyday life of such a household. Various kitchen utensils, for instance, fling us straight into the culina, where all food preparation took place. Food was usually stored in ceramic containers, such as amphorae and dolia, sealed with stoppers and sometimes partly submerged below floor level. Serving plates could vary in fineness, depending on the owner and the type of meal. 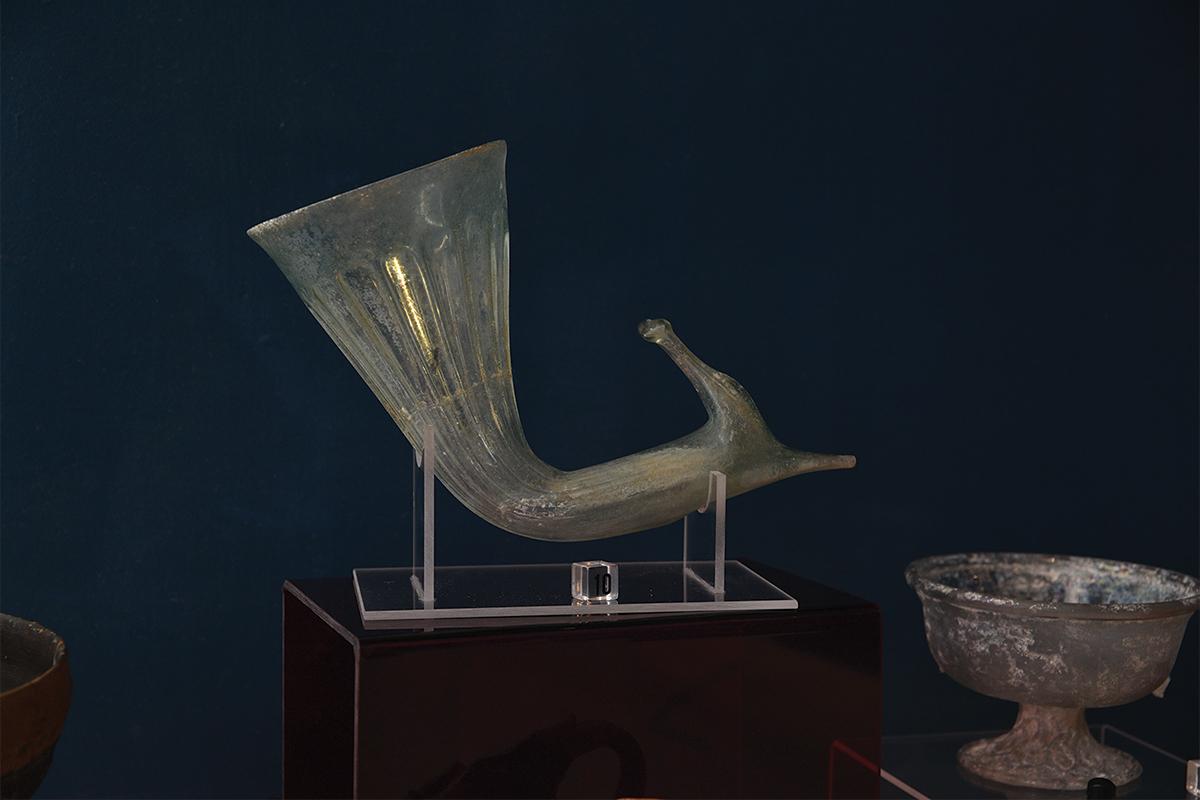 A rython exhibited at the Domvs Romana.

Wine and drinking played a main role, both during and after meals. Prolonged drinking sessions with ongoing entertainment were usually held after important meals and drinking could be made more enticing by the use of utensils like the rython – a specimen of which may be admired at the Domvs.

Other exhibits, such as various bottles for storing perfumes, oils and cosmetics as well as combs, pieces of jewellery and hairpins made of bone, give us a clear indication that ancient Romans took pride in their appearance as much as we do.

Women weren’t the only ones taking their time to get ready – men also took great care of their skin and usually covered it with ointments, which they scraped off with an elongated, curved implement known as strigil. As for jewellery, very little has survived in Malta from Roman times but the pieces displayed at the Domvs provide a good testimony to their intricate richness and craftsmanship. 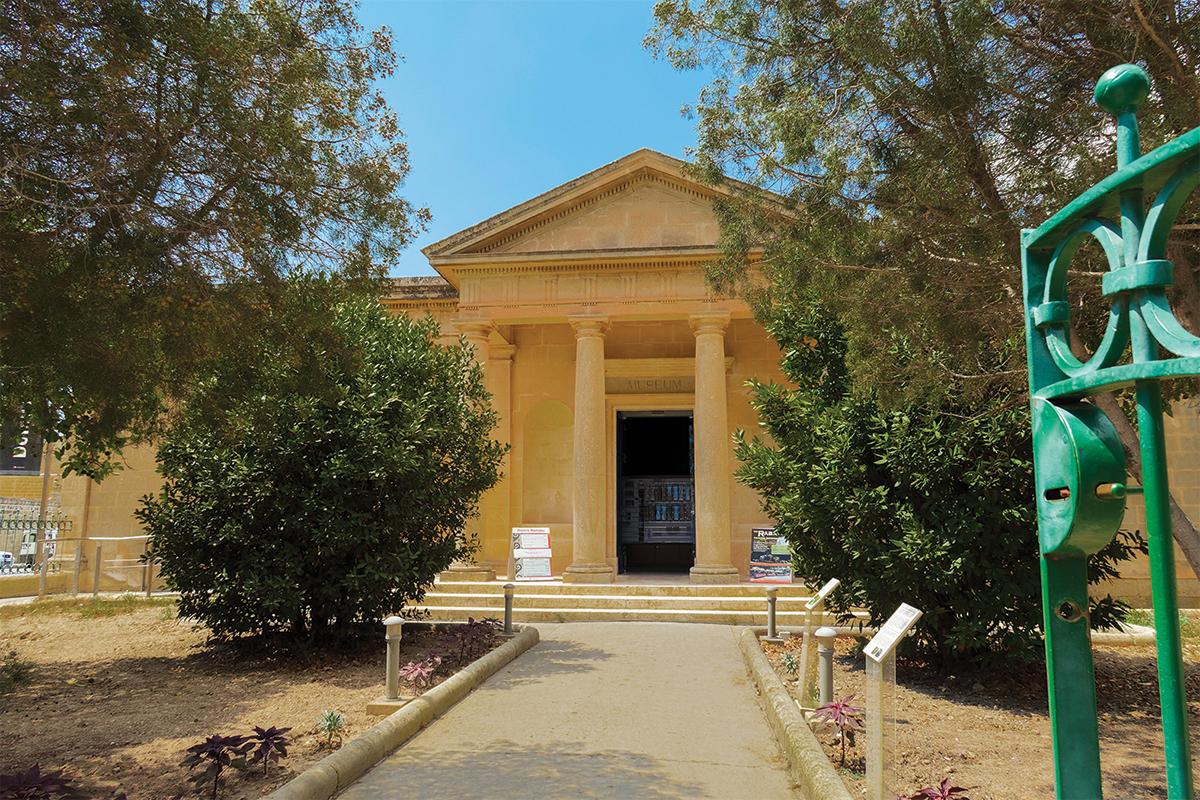 The façade of the Domvs. Photo: Shutterstock.com

Bone bobbins and numerous loom weights shed light on spinning and weaving in Roman times and spark the imagination as to the clothes the Domvs’s inhabitants would have worn. The most common clothing in the Roman period was a simple tunic accompanied by open leather sandals. However, Roman citizens usually wore a white toga, which would be adorned with a purple band round the seam if the wearer was a high-ranking man. Women wore coloured stolae over an under-tunic and a palla (large shawl) that could be worn in various ways. In the cooler months, cloaks were usually preferred.

There is so much more to be discovered at the Domvs Romana, such an incredible wealth of artefacts that yet make up only a fraction of our unique cultural heritage. The sheer fact that we can set foot in this house some 2,000 years into its existence is a wonder in itself and all the more reason for Heritage Malta to celebrate its discovery’s anniversary as befits such a remarkable event in our history. 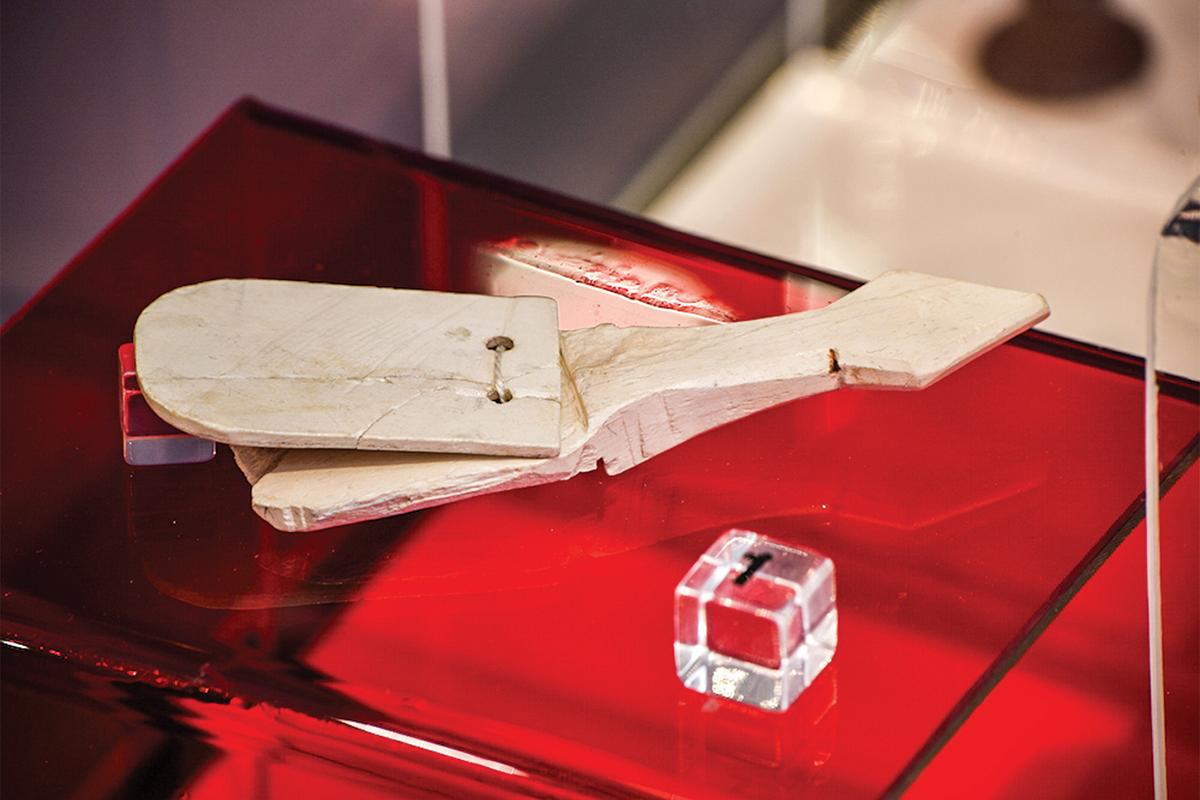 A child’s rattle made of bone, another exhibit at the Domvs Romana.