The fat, rusty padlock on the faded green doors of Villa Guardamangia has gone, and for the first time, the public has been allowed inside the house in Pietà where Queen Elizabeth II once lived.

We’re not experiencing the villa exactly as the Queen did, of course. Paint is peeling off the walls, there are books and toys lying around and the garden is badly damaged. But you can feel her presence here still. 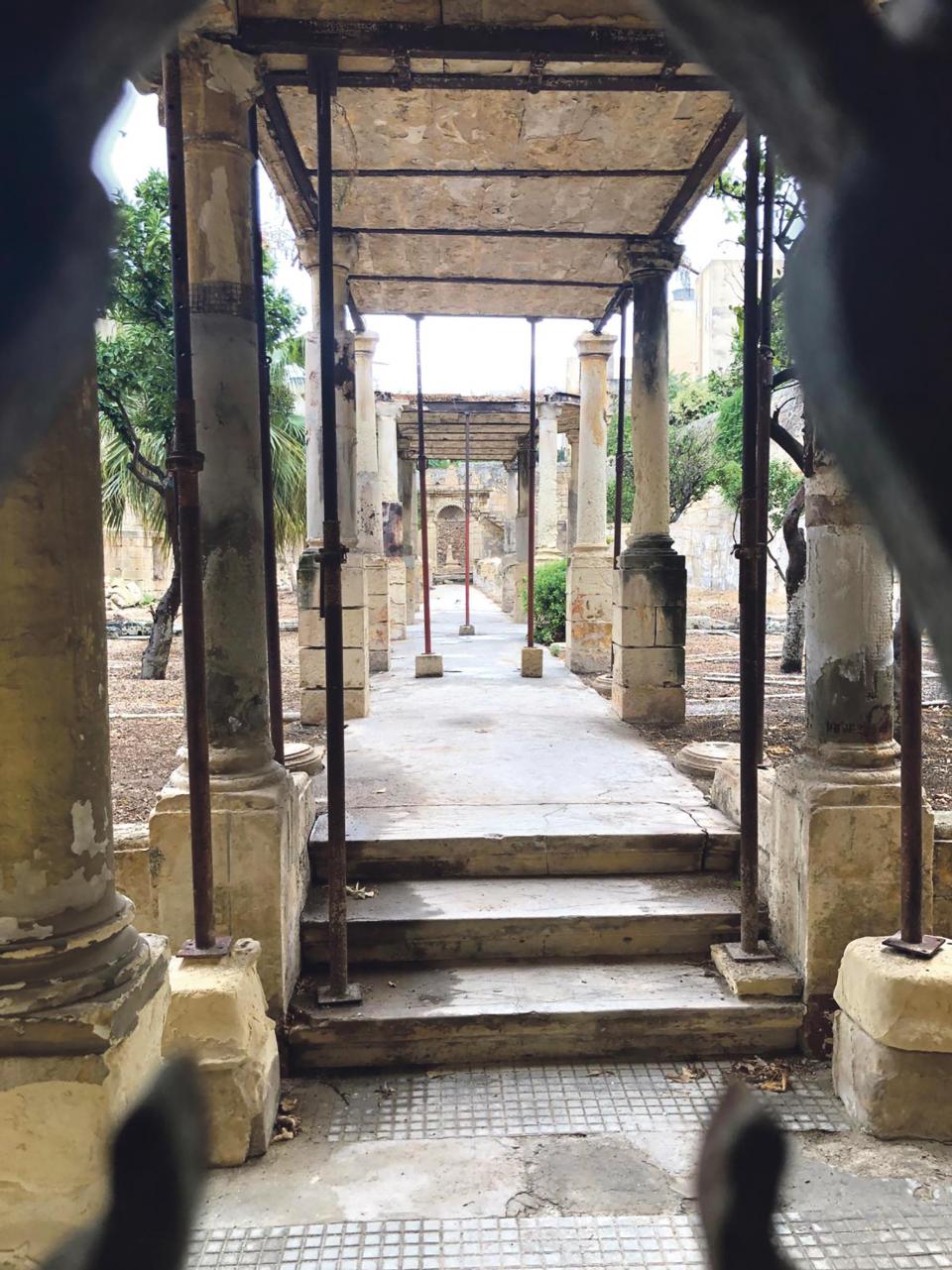 Underneath the famous walkway, now held in place by scaffolding. The missing section is where the Queen and Prince Philip sat on a bench and posed in a famous photograph.

The Queen (then Princess Elizabeth) lived in the villa with Prince Philip for various periods between 1949 and 1951, while he was a naval officer stationed on the island. It was leased by Philip’s uncle Lord Louis Mountbatten and his wife Edwina, who also lived here with the royal couple.

For five days earlier this month, the public were allowed to pass by the huge brass dolphin knockers clinging to the front door, because everything in the villa was sold at auction, following the recent death of the woman who lived there for many years.

The auction preceded the sale of the house, which has an asking price of €6.5m. After years of calls by the government and NGOs to have the house restored, perhaps now its heritage may finally be put on display – depending on who its new owners are. There are rumours the Royal Family themselves are interested in it.

Despite its faded glory, the building remains beautiful and awash with charm. It’s a simple layout – four rooms on the ground floor and a staircase that lies invitingly open with its wide, smooth slabs.

Paintings of ships and people and landscapes jostle for position on the walls like a bus stop queue.

One gloomy picture next to a doorway, of St Joseph peering out of the dark, is actually by renowned artist Mattia Preti, whose work usually adorns cathedrals.

The furniture seems mismatched but the auctioneers said some of the pieces dated from the 17th and 18th century. So plenty of it may well have been used from the time of the royals – we just don’t know either way.

In the dining room, piles of books sit next to crockery that’s stacked up on old chests of drawers, which are next to cabinets filled with porcelain knick-knacks, old bottles with cloudy glass, and clear containers of crystal. It all looks rather like the open-air Sunday market in Vittoriosa.

There are only so many places where you can genuinely feel the history seep into you, and Villa Guardamangia is one of them.

This isn’t a grand, ostentatious palace, with gilded edges and red velvet and fine china decorating long corridors populated by butlers and paintings the size of a car park.

And yet it’s just as important a place as any overblown palatial residence, anywhere in the world. 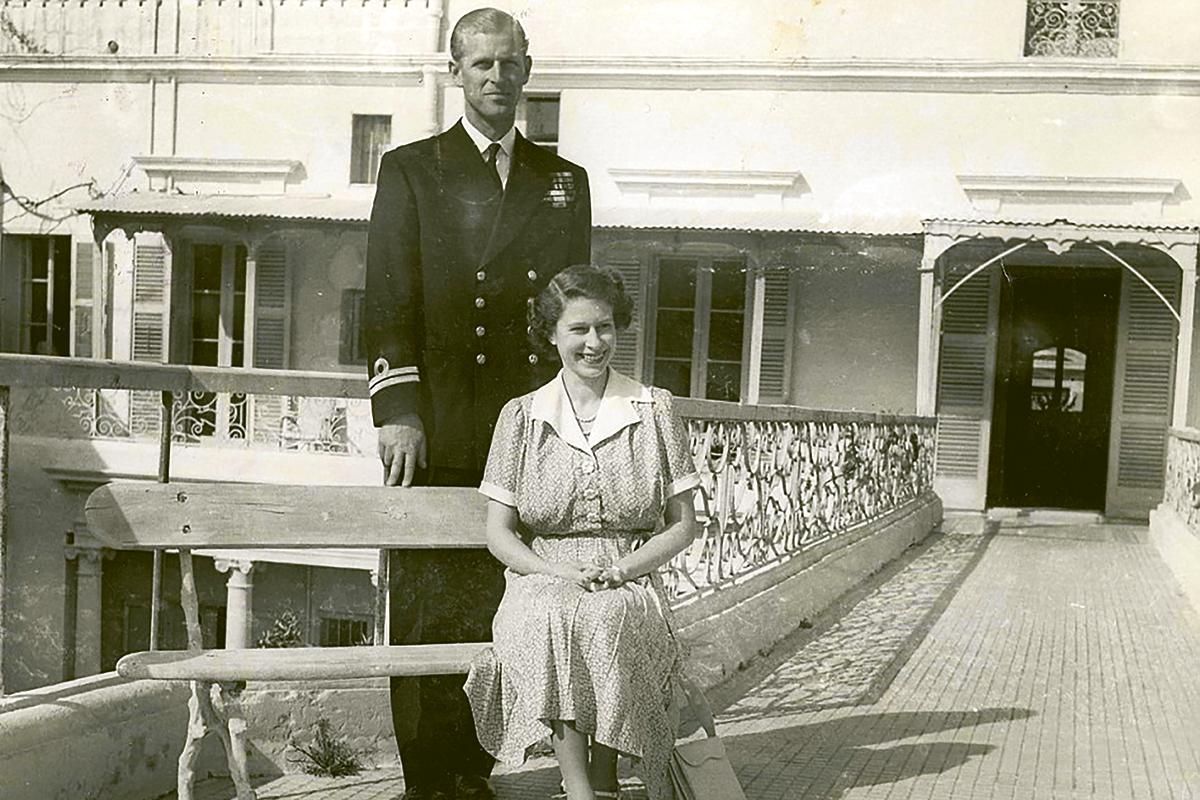 Prince Philip and the then-Princess Elizabeth pose outside Villa Guardamangia. The British press interpreted Philip’s two fingers as a hint that they were expecting their second child. Photo: Frank Attard

It’s the only building in which the British monarch has ever lived outside of the UK.

Her residency here was a unique time in the history of the most famous woman in the world, who is the longest-lived and longest reigning British monarch, as well as the oldest and longest-serving current head of state.

She describes her time in Malta, living in this house, as among the happiest of her life, when she went on picnics at Dingli, swam in rock pools in Sliema, went to the hairdressers in Valletta and drove herself around in a Morris Minor.

It’s easy to imagine the Princess Elizabeth padding around this place some 70 years ago, just a young woman in a summer dress, barefoot. She spent winters here too, and once remarked to a British serviceman’s wife that she found Maltese tiles cold to walk on. It was these very tiles that she was talking about.

You can easily conjure up images of the princess and her prince, only a year or two into their marriage, hosting dinner parties here or wandering around the garden without a care, before the eyes of the world turned on them both, never to leave.

Once up that alluring staircase, you’re in a long room with a bed at the end. Another door on this floor, which apparently leads to more rooms, is locked and the staircase continues on up to the roof, which is sealed off.

But it’s from the first floor windows that the damage to the garden can really be seen.

The elevated walkway where the then-princess posed for photographs with the prince has partially collapsed. The section where she sat on a bench, with Philip behind her and his hand displaying two fingers (interpreted by some as being a clue to their unannounced second child, Princess Anne) has gone.

What’s left of the walkway is now propped up by brown metallic fingers, apparently the only things keeping the remaining parts of the path aloft. Around the rest of the garden the earth is an ominous brown, devoid of life.

Despite this, lines of trees are still standing firm, offering a glimpse of what was and hope for what could be, once again.