Last week was a pretty exciting one for those who appreciate street art. C215, the French artist who is fast making a name for himself on an international level with his vibrant work, visited Valletta and left his mark in several spots.

And by mark, I mean honest-to-goodness artworks. In an interview I did with the artist while he was in Malta (read here: http://www.timesofmalta.com/articles/view/20141027/local/street-art-by-frances-banksy-colours-valletta.541529), he explained how he chooses his sites carefully, never painting on walls without permission.

Where Valletta was concerned, doubly so, due to the historical significance of the buildings. 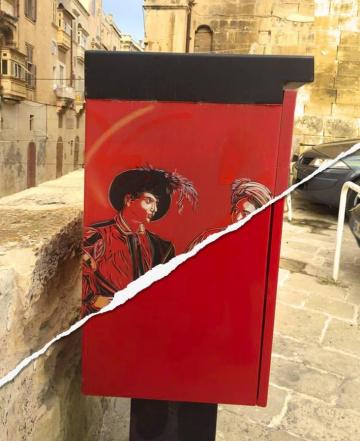 In fact, his chosen sites were mostly the square MaltaPost boxes, some colonial pillar boxes and the green electricity boxes. His work is easily reversible with a couple of lashings of paint, he assured me.

Maltese authorities seem to have taken these assurances to heart, because guess what. They went ahead and reversed them. The beautiful work that was inspired by Caravaggio has disappeared to make way for... red paint.

Yup. The French postal service enshrined C215's work in the national museum. Malta, on the other hand, covered it with red paint. Nice one, guys.

It's a sad day when institutionalism wins over art. And please, spare me the cries of "but those boxes are part of our colonial heritage" etc etc. The square, free-standing ones near Lower Barrakka and St Barbara Bastions have nothing of the historic about them and are as common as muck.

Yet, C215's signed work was still painted over, in a move that smacks not of heritage preservation but of pointless institutionalism.

Some of the round pillar boxes installed under British rule might indeed have a measure of historic relevance and are, in fact, protected by MEPA as Grade 2 public monuments. Unfortunately, in our effort to feel special, we do somewhat overstate the historic value of these blessed boxes.

As far as I am aware, the ones that were chosen by C215 for his works are not even original Penfolds dating back to the 19th century. Nor are they Victorian, or Georgian.

They are the National Standard variety, created mid-20th century and still common across Great Britain and other Commonwealth countries.

So much for being special and for turning them into national monuments.  I could understand this zeal had it been directed at the rarer variety, such as a locally-manufactured specimen that is found in Zejtun.

But slapping a protection order across the board and causing it to ruin something wonderful like...you know... original art instead of red paint? No. I don't get the point.

Thank you MEPA. Now how about doing some real work, like evicting squatters from Armier?

Shame that Mepa or Malta Post (I remain in the dark as to who was responsible, as Maltapost told me that no-one was available to answer my questions today) didn't have the political nous to pull an Arts Council. The latter adopted the artist pretty much as soon as news of his whereabouts was leaked, and rightly so, too.

Those responsible for the paint job, on the other hand, chose to be super short-sighted, turning what could have been a golden marketing opportunity into a PR fail.

If Malta thinks the red pillar boxes are a massive tourist attraction, what do we think red pillar boxes plus good street art by a respected artist will be? And what about the square boxes, whose historic value is precisely zilch? Why cover those up?

Of course, I can find my way towards forgiving a bad call. We are all guilty, every so often. What I find more difficult to forgive, however, is arrogance and under-handedness.

Despite considerable public interest raised (I visited the works almost everyday last week; each time they were surrounded by a gaggle of enthusiastic locals and tourists) the art was covered up sneakily, overnight, with no form of consultation.

Ah, the arrogance. Would it have killed whoever signed the order to get feedback from other entities and from the public first? But no. Heavens forbid the self-importance of a civil servant is undermined by art.

What we should have done, of course, was pay the man - who, incidentally, gave Malta a ton of publicity on his widely-followed social media accounts - and commissioned more.

Instead, we wasted the money on bog standard red paint. Hello, Valletta 2018.

I don't want to live on this planet anymore.