A massive leak of documents that exposes the offshore holdings of 12 current and former world leaders reveals how associates of Russian President Vladimir Putin secretly shuffled as much as $2 billion through banks and shadow companies.

The leak also provides details of the hidden financial dealings of 128 more politicians and public officials around the world.

Malta's Konrad Mizzi is mentioned among them.

The cache of 11.5 million records shows how a global industry of law firms and big banks sells financial secrecy to politicians, fraudsters and drug traffickers as well as billionaires, celebrities and sports stars.

These are among the findings of a yearlong investigation by the International Consortium of Investigative Journalists, German newspaper Süddeutsche Zeitung and more than 100 other news organizations.

On Health and Energy Minister Konrad Mizzi, the site says

"Konrad Mizzi is the minister of energy and health of the Republic of Malta. He was elected to Parliament in 2013 and became the deputy leader of Malta’s ruling Labour Party in February 2016. Given Mizzi’s quick rise, one pundit called the minister “one of the most successful politicians in recent history.” Later in February, following media reports, Mizzi announced he would close an offshore company in Panama owned by a New Zealand trust he had created. Mizzi said he had declared the company and said he was closing it in the interest of transparency. Malta's main opposition party has called for an investigation. 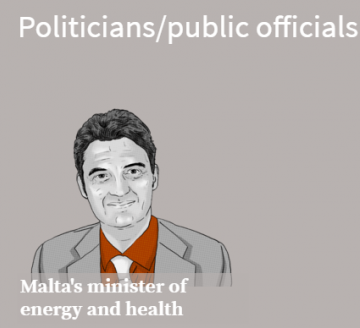 "In July 2013, four months after Mizzi joined the Maltese government, an accounting firm in Malta bought several Panamanian companies from Mossack Fonseca, including Hearnville Inc. In June 2015, Mizzi established a trust in New Zealand that is the shareholder of Hearnville. The beneficiaries of this trust are his wife — Malta's consul in Shanghai — and two children. In June 2015 Mizzi told Mossack Fonseca he would use Hearnville as a management consultancy and brokerage firm. On this last point, Mizzi said that he filled out a "standard category wording that was included in a template form which was part of the company acquisition process."

"A law firm representing Mizzi said the Panama company Hearnville Inc. was acquired "to hold a London property" owned with his wife. The company, which the law firm said has no assets nor bank accounts, was owned by a family trust under an arrangement recommended by professional advisers. The trust was registered in New Zealand, where the law firm noted trustees "are obliged to declare relevant information to the New Zealand tax authorities, who in turn will share this information with the Maltese tax authorities. The firm also said Mizzi "declared his interest in the Company and the Trust in his 2015 Ministerial Declaration of Assets at the first available opportunity." Mizzi has asked Malta's tax authorities to audit his financial affairs and has said that he will close Hearnville once it is complete."

The New Zealand document creating Dr Mizzi's trust can be seen at https://www.documentcloud.org/documents/2774415-Mizzi-Konraddoc2.html 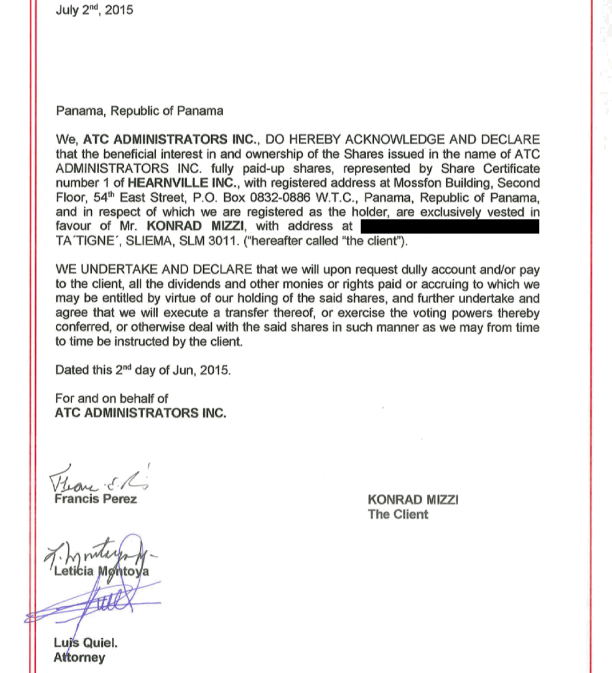 By August 8, the Mossack Fonseca franchise firm in Malta, which acts for Mizzi and Schembri, was writing to Mossack Fonseca Panama: "We are in the process of opening a bank account in Dubai for two of our Panama companies.- Financial Review

Meanwhile a financial website has reported on a possible link between the Panama companies and a Dubai bank.  Read more: http://www.afr.com/business/banking-and-finance/the-panama-papers-nz--the-quiet-tax-haven-achiever-20160401-gnvw7s#ixzz44nOA5zhA

The files expose offshore companies controlled by the prime ministers of Iceland and Pakistan, the king of Saudi Arabia and the children of the president of Azerbaijan.

They also include at least 33 people and companies blacklisted by the U.S. government because of evidence that they’d been involved in wrongdoing, such as doing business with Mexican drug lords, terrorist organizations like Hezbollah or rogue nations like North Korea and Iran.

One of those companies supplied fuel for the aircraft that the Syrian government used to bomb and kill thousands of its own citizens, U.S. authorities have charged.

“These findings show how deeply ingrained harmful practices and criminality are in the offshore world,” said Gabriel Zucman, an economist at the University of California, Berkeley and author of “The Hidden Wealth of Nations: The Scourge of Tax Havens.” Zucman, who was briefed on the media partners’ investigation, said the release of the leaked documents should prompt governments to seek “concrete sanctions” against jurisdictions and institutions that peddle offshore secrecy.

World leaders who have embraced anti-corruption platforms feature in the leaked documents. The files reveal offshore companies linked to the family of China’s top leader, Xi Jinping, who has vowed to fight “armies of corruption,” as well as Ukrainian President Petro Poroshenko, who has positioned himself as a reformer in a country shaken by corruption scandals. The files also contain new details of offshore dealings by the late father of British Prime Minister David Cameron, a leader in the push for tax-haven reform.

The leaked data covers nearly 40 years, from 1977 through the end of 2015. It allows a never-before-seen view inside the offshore world — providing a day-to-day, decade-by-decade look at how dark money flows through the global financial system, breeding crime and stripping national treasuries of tax revenues.

Most of the services the offshore industry provides are legal if used by the law abiding. But the documents show that banks, law firms and other offshore players have often failed to follow legal requirements that they make sure their clients are not involved in criminal enterprises, tax dodging or political corruption. In some instances, the files show, offshore middlemen have protected themselves and their clients by concealing suspect transactions or manipulating official records.

The documents make it clear that major banks are big drivers behind the creation of hard-to-trace companies in the British Virgin Islands, Panama and other offshore havens. The files list nearly 15,600 paper companies that banks set up for clients who want keep their finances under wraps, including thousands created by international giants UBS and HSBC.