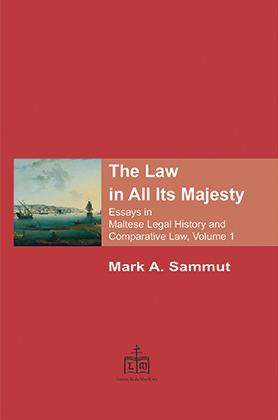 Mark A. Sammut: The Law In All Its Majesty.
Essays in Maltese Legal History and Comparative Law, Volume 1
Lettou & de Machlinia Press

I recently came across this book which, however, had been published in January 2016. And, therefore, this is ‘a better-late-than-never’ short review.

The four essays are not thematically connected, so each of them can be treated on its own without reference to the others.

The first essay is titled Juridical Importation into Maltese Law of Italian Private Law solutions and its implications (Id-Dritt, Vol. 25, 2015). This ‘importation’ of a foreign element into our legal system is quite a common jurisprudential practice by our courts which, given the similarity of many of our institutes of law to those present in Italian civil law is a salutary and enriching practice.

But, of course, there also lies an obvious trap for the insufficiently attentive judge who, following this practice in a rather blind and haphazard way, applies what he considers to be Italian law, theory and practice.

When Maltese law on the matter is completely different from the Ita­lian one such a judge would not only deliver a grave misinterpretation of Maltese law but even worse, would commit a serious injustice by not applying in the matter before him the right law and its solution of the relevant rights and obligations.

The author does not give examples of what he is rightly lamenting, but perhaps one could point out as an outstanding case in point the application of Italian rules that are not compatible with Maltese law which in the Institute of Spoliation – [spoll] does not allow any plea by the defendant except that which is relevant as to the facts regarding the possession or detention and of the spoliation acts themselves [Art. 791 {3} of the Code of Organisation and Civil Procedure].

And yet, certain judgments of  Maltese courts have allowed pleas based on the intention of the person who has committed the spoliation and got away with it.

The author points out the further problem that some Maltese judges did not pay sufficient attention to the fact that looking at Italian law based on the code of 1865, which is quite similar to Malta’s, not noticing that the Italian code of 1942 is quite different in many respects.

The second essay is titled Histori­cal Facts and Myths surrounding the Criminal Code of Malta, which had originally appeared in Id-Dritt, Vol. 22, 2012. It is a study of the genesis of our Criminal Law Code.

The beginning is traced back to 1831 when a commission was appointed by the Colonial Adminis­tration, chaired by Chief Justice Sir John Stoddart, with a Maltese judge and three Englishmen, charged with compiling a Criminal Law Code.

This commission was dissolved and replaced by another in 1834 which this time, however, more sensibly was composed of four Maltese judges and a Maltese jurist. They drew up two codes – the Criminal Law one, and accompanied it by another dealing with Criminal Procedure. They did this in 1835.

The Secretary of State, however, requested the commissioners to review once again what they had done, and the revised project was ready by 1842, together with an explanatory report.

At this point, the Secretary of State appointed Andrew Jameson, a Scottish lawyer, to look at the proposed code and to make any observations he deemed fit.

During my student studies at  the University of Malta, Jameson was not only appreciated for his comments on the draft Criminal Codes drawn up by Maltese jurists – four judges and a lawyer – but was almost granted the honour of having compiled the whole code himself. It is then that the author identifies Jameson as the person around whose image some Maltese jurists have created certain myths.

It has been mythified that the British liberal spirit infiltrated the Maltese legal system. The author blames Jameson as being the source of this boastful assertion, which he cannot accept, as it is incompatible with the man who was so much in favour of capital punishment and who expressed the thought that he was afraid that the Maltese – as people of the south – would dilute certain punishments in the code to lessen their severity.

The essay is quite an interesting contribution to the history of Maltese legislation.

The third essay is titled Medieval [Legal] beasts in our midst. Co-authored with Patrick Cuignet, the essay is, in fact, a study in Comparative Law. It examines in detail the legal terms résiliation, resiliment and résolution with reference to contracts.

The use of one or more of these terms, beginning with the Code Napoleon and through the Codes of the State, that of Quebec, the Kingdom of the Two Sicilies the Italian Code, and ending up with the Maltese Civil Code, extending it to the different uses of the two terms in our jurisprudence, and ending up in a Post Scriptum which notes that the Maltese unit of the European Court of Justice is now translating résiliation as xoljiment and résolution as ħall.

The author keeps his distance from this practice, remarking that the terms in our law are, in fact, used synonymously.

The last essay is an analysis of what the author himself says is of an obscure term – midheb – which he found in Vassalli’s Lexicon. He describes his finding in the title of the essay Latin wine decanted into a Semitic carafe. So this essay is more of a linguistic journey with a faint legal connection. Like father, like son.

The author’s father was Frans Sammut, a linguist and novelist of repute, which explains the author’s curiosity in researching such an archaic term that is unknown to the great majority of Maltese speakers, including the myself.

In his quest to explain the very existence of the term which appears only in Vassalli, the author carries out a veritable insightful examination of Arab and even Jewish languages and legal structures, but in the end he seems to come to the regretful conclusion that this word, like others of the same type, such as baqgħa, never formed part of our legal terminology.

The writer is a first-class re­searcher, ranging far and wide and following all the trials, primary and secondary, which that research suggests. This is quite impressive.