An isolated President Donald Trump arrived Saturday for the G7 summit in Biarritz bearing threats of tariffs against host France and a decision to deepen his trade war with China, despite fears of US or even global recession.

Trump dislikes the kind of multilateral forums epitomized by the G7, insisting on a policy of "America first" and his own skills, honed in a real estate career, of one-to-one deal making.

Ahead of the summit in the elegant French seaside resort, he has criticized most of his partners, rowing with them over Iran, trade, global warming and Brexit.

And on the eve of his trip, he brushed aside concerns of global economic slowdown to exchange new tariffs with China, insisting "we'll win."

In another piece of brinkmanship, he also confirmed right before departing on the Marine One helicopter that he would retaliate against France's iconic wine exports if President Emmanuel Macron didn't retreat on a new tax that will hit US digital giants like Google.

"We'll be taxing their wine like they've never seen before," he vowed.

The other G7 leaders - from Britain, Canada, France, Germany, Italy and Japan - are waiting for Trump with a mixture of alarm and resignation.

Macron has even decided that for the first time the G7 won't issue a group statement at the end of the summit, given the extent of divisions.

At last year's meeting in Canada, Trump withdrew his signature in a fury at Canadian Prime Minister Justin Trudeau.

It would be "pointless," Macron said.

Other G7 leaders are already alarmed at the fallout from the escalating US-China trade war.

Trump says he alone is able to take on the Chinese after decades of intellectual property theft and a slate of other unfair trading practices.

He called the struggle "a little spat." 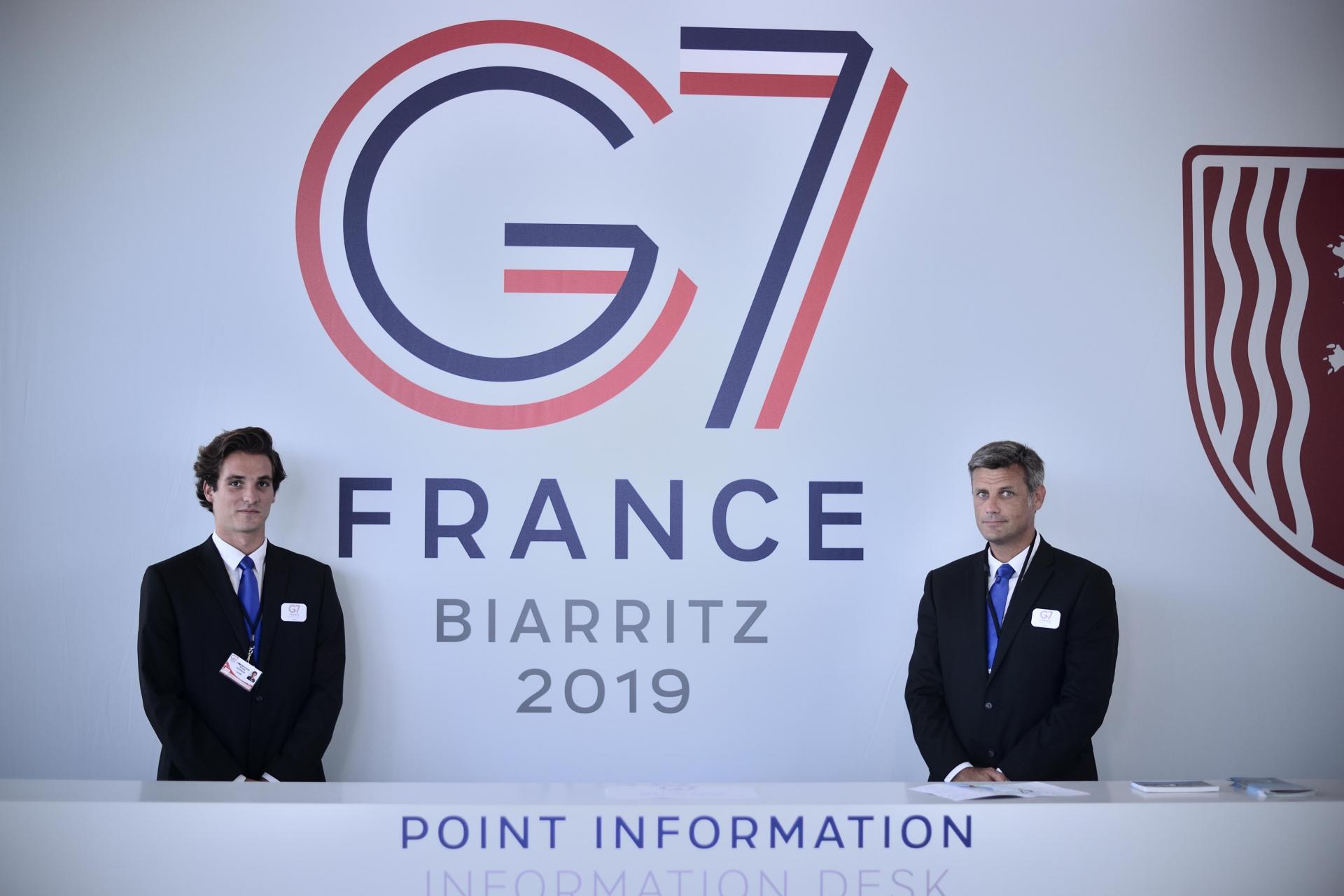 The press desk at the G7 summit in Biarritz. Leaders from the world's seven largest economies will hold a round of talks in the French town on Saturday. Photo: AFP

At the G7 he is expected to seek allies, but the other leaders are deeply skeptical about whether Trump's crusade can ever succeed -- or whether it will tip a slowing world economy over the edge.

The first working event of the G7 will be a session early Sunday that the White House specifically asked at the "last minute" to be added to the agenda: a meeting of the leaders on economic growth.

Trump will tell his partners "to write the rules for this century, in contrast to the unfair trade practices that we see coming out of China," a senior administration official told reporters.

Trump will also urge the Europeans, Canada and Japan to shake up their own economies along US lines.

"You’ll have the president really engaging in honest conversations," the official said.

Despite the diplomatic storm clouds gathering over Biarritz, on the Atlantic coast, Trump said the trip "will be very productive."

But there are questions over the future of the G7 as Trump's nationalist approach turns it into something more like a 6+1.

G7s always used to be cozy affairs, giving the leaders of like-minded, capitalist democracies a chance to relax and talk frankly in the context of largely shared values.

However, there is increasingly little common ground between Trump and what would ordinarily be among the closest of US allies.

Yet another diplomatic hand grenade went off days before the trip, when Trump reiterated his desire to recreate the G8 format with Russia, expelled in 2014 after Vladimir Putin's invasion of Crimea.

Other G7 leaders have rebuffed this, but Trump, who will host the G7 next year, is unlikely to give up easily.

Another point of contention is Brexit, the chaotic decision by Britain to quit the European Union.

British Prime Minister Boris Johnson has staked much on striking a bilateral trade deal with the United States as a key step in his country's new go-it-alone strategy.

While Johnson finds it tough going with Merkel and Macron, he's likely to encounter a much warmer Trump, who says the EU has "not treated the UK very well."