Less than four months had elapsed since the rescript authorising the solemn coronation of the statue of Maria Bambina had been issued by the Holy See on April 25, 1920. The feast of the Nativity of the Blessed Virgin in September 1920 was one of special enthusiasm. 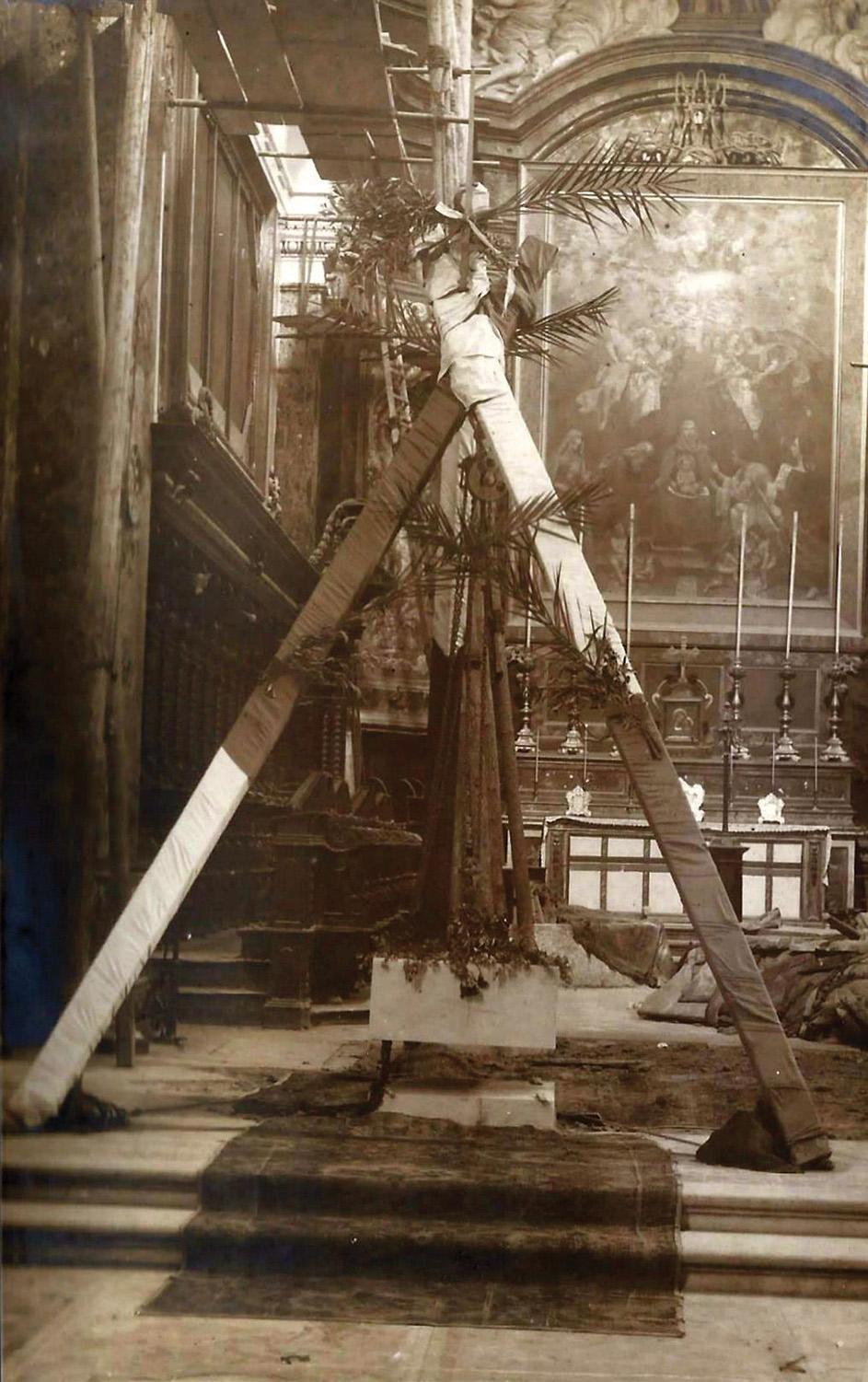 On June 12, 1921, the foundation stone of the baldachin was laid and blessed by Mgr Caruana.

Due to the difficult circumstances of World War I, the external festivities had been suspended since 1913. Proposals for the celebrations that were to be held on September 4 of the following year were being forwarded and studied.

While preparations for the coronation were picking momentum, and enthusiasm augmented among the people of Senglea, a desire was sown for the collegiate church to be elevated to the dignity of basilica. This title is the highest privilege popes can grant to churches. To acquire the honour of a minor basilica, it was necessary for Senglea’s collegiate to prove, before the Holy See, that it was endowed with sufficient religious and artistic credentials.

Fittingly, Senglea feels grateful to Pope Benedict XV, since the decrees of the coronation of the statue of the Bambina and that of the basilica were issued in his name. However, there were others who had worked with persistant effort to convince those responsible that Senglea merited these honours.

With regard to the title of basilica, Senglea should never forget the Benedictine Dom Mauro Inguanez, OSB, and Canon Goffredo Lubrano. It was these two Senglea-born priests, with the consent of Canon Giuseppe Adami, archpriest of Senglea, who had initiated the collaboration with Cardinal Antonio Vico, Prefect of the Sacred Congregation of Rites, in Rome. After the feast of the Bambina held in September 1920, they promptly set the ball rolling, knowing that a formal petition had to be addressed to the supreme authorities of the Church in Rome. 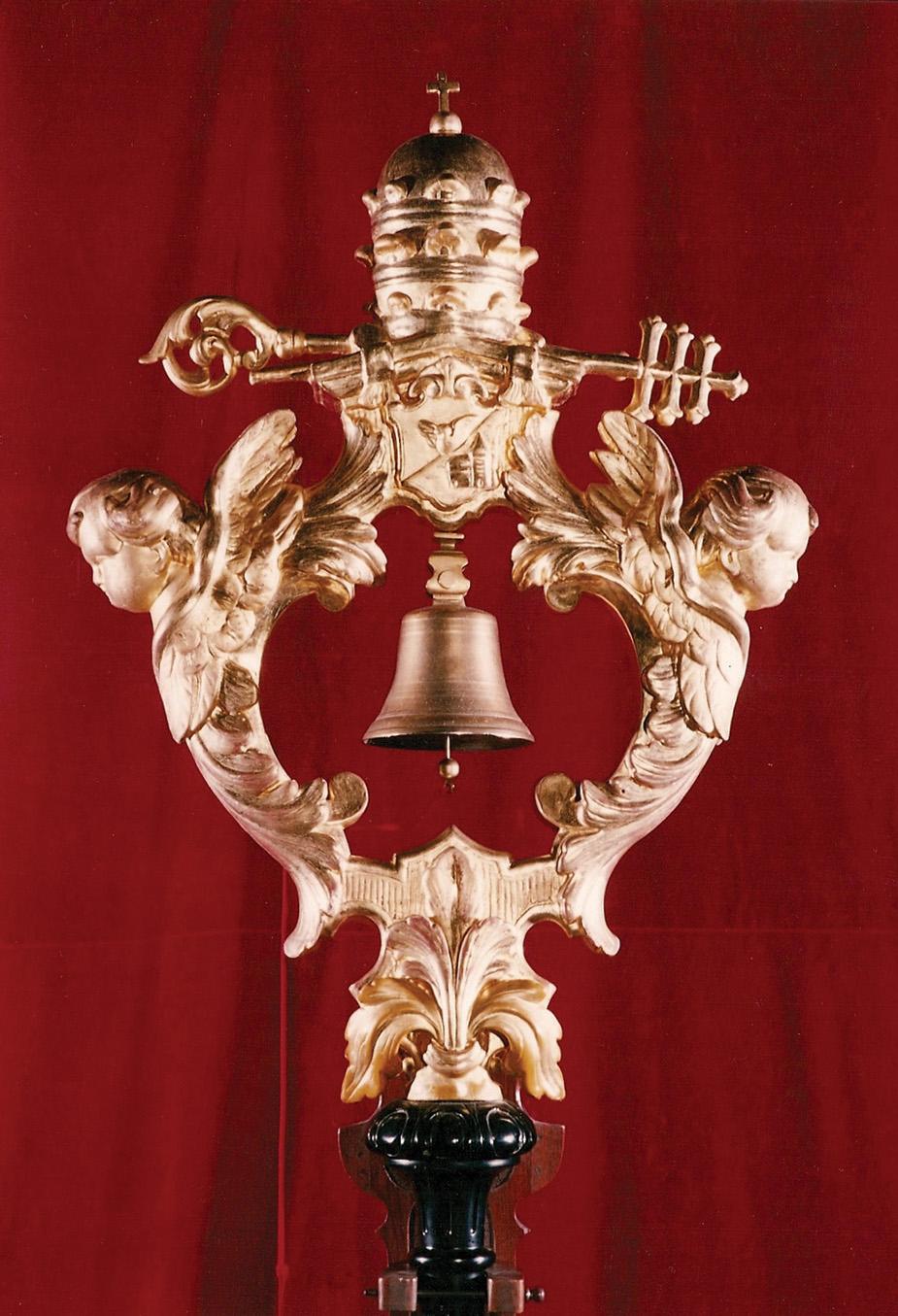 Archpriest Adami drew up the petition, which described the outstanding events of the town and of the parish:

Senglea was bestowed with the title of Invicta because it remained unconquered during the Great Siege of 1565; it has a parish church built as a memorial of that great victory; Pope Pius VI elevated it to the honour of collegiate Insignis in 1786; in it there is a vivid devotion towards the Virgin Mary, whose statue miraculously arrived in the city and had been venerated for about 300 years; in a short time, a gold crown was to be placed on the head of the Bambina, because on April 25, 1920, the Holy See had issued the rescript of the coronation; devotion towards the Bambina was more than evident since the people contributed with abundant generosity to the gold crown. It was further clarified that the church had been consecrated on October 20, 1743, by Bishop Paolo Alpheran de Bussan.

This supplication was read by Archpriest Adami and approved by the Chapter during a meeting held on September 21, 1920. On September 27, a capitular delegation presented it to Archbishop of Malta Mauro Caruana, OSB, who assured them of his much-needed support before the Holy See. 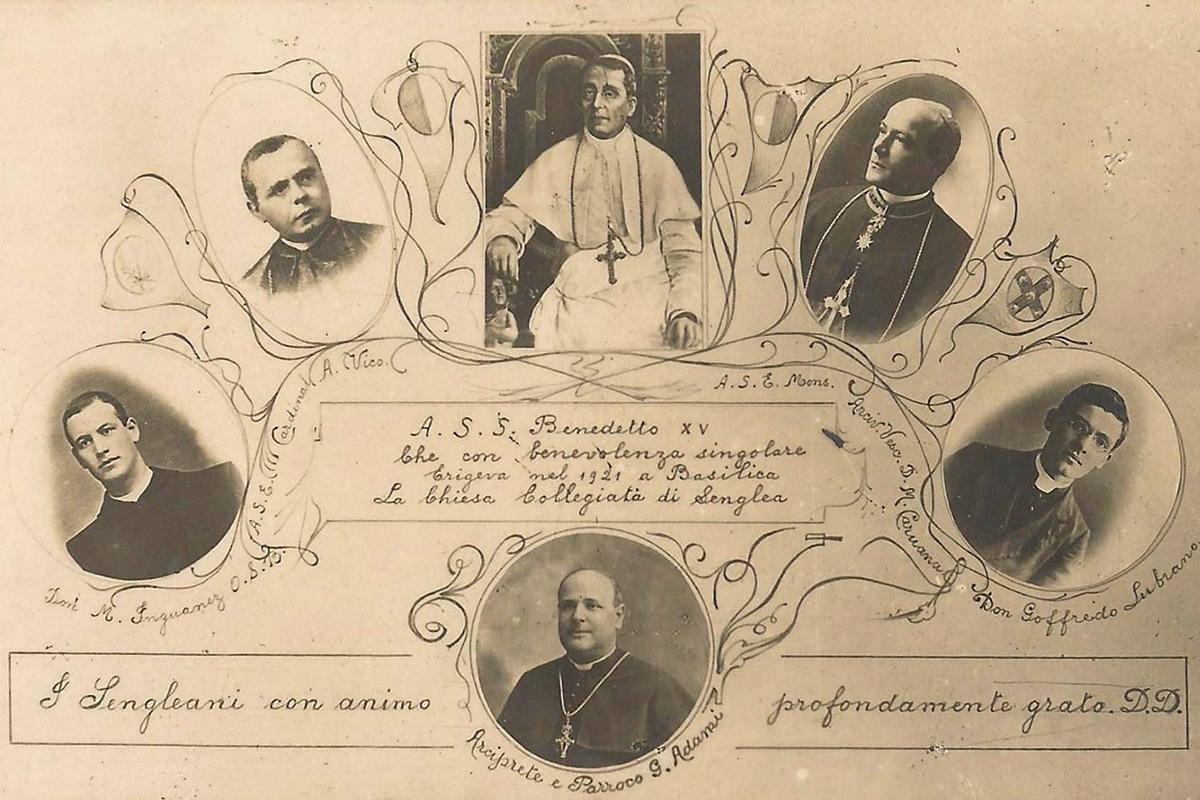 On January 3, 1921, Pope Benedict XV issued the decree Ad perennandam memoriam with which he adorned Senglea’s collegiate church and parish with the title and dignity of minor basilica. With this pontifical document another golden page was written in the history of Senglea. 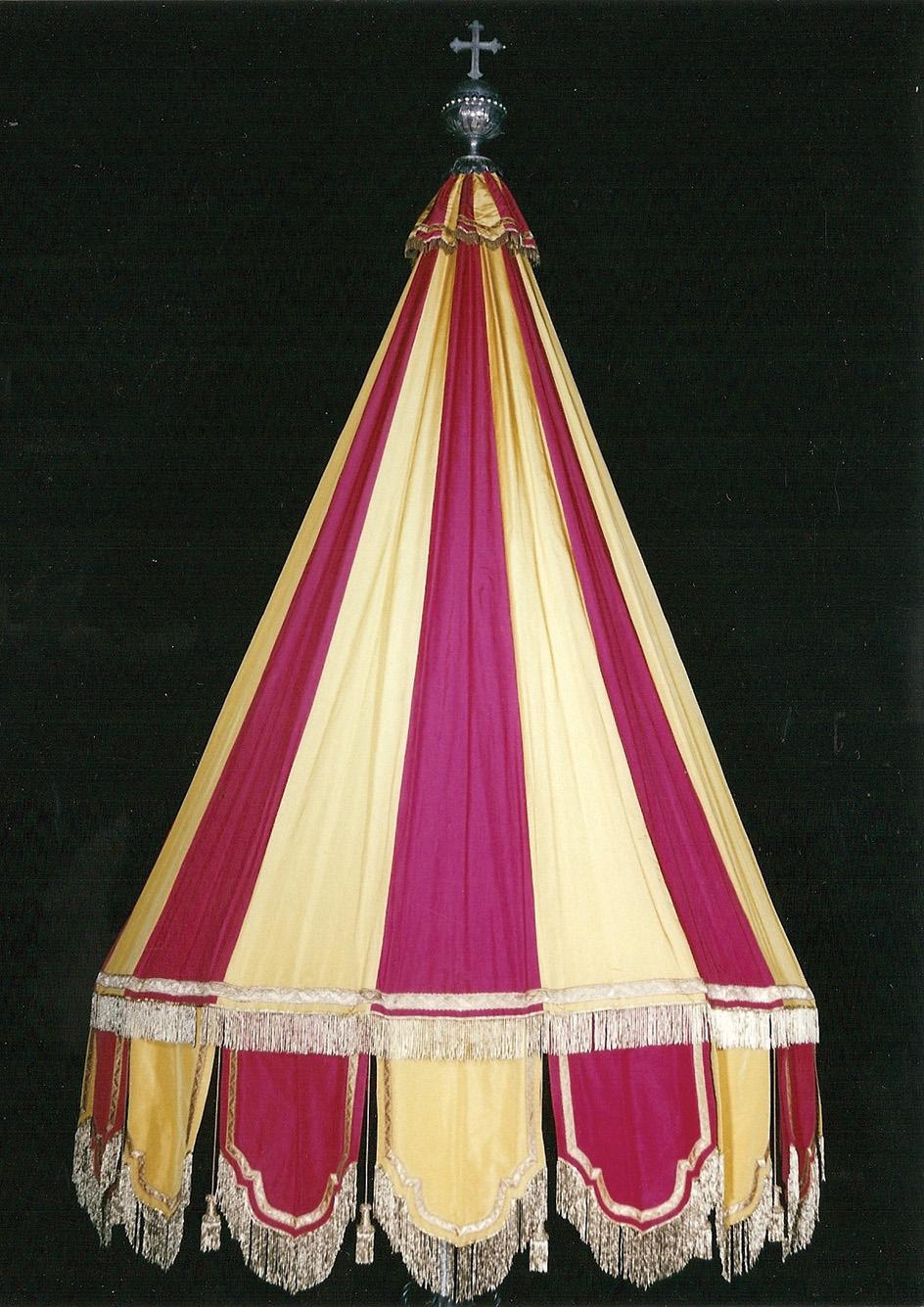 The joyful pealing of the bells of the collegiate church, now a new basilica, announced the arrival in Malta of this document on January 19, 1921. The following Sunday, January 23, Mgr Emanuele Vassallo, the diocesan secretary, visited Senglea and, from the pulpit, proclaimed publicly the apostolic letters of the basilica. It reads:

“For memory everlasting. In the town of Senglea, in the island of Malta, there is a church built in honour of the Nativity of the Blessed Virgin Mary, known as ‘Our Lady of Victories’, erected in memory of the glorious victory against the Turkish army in 1565. It was built in thanksgiving for the deliverance of the town from such a great danger.

On January 3, 1921, Pope Benedict XV issued the decree Ad perennandam memoriam with which he adorned Senglea’s collegiate church and parish with the title and dignity of minor basilica

“Our predecessor Pius VI, of cherished memory, adorned that church with the title and honour of collegiate Insignis. Now, on the occasion of the joy arising by the event of the coronation of the statue of the infant Mary, which they call Maria Bambina, venerated with great devotion in that temple, the chapter and clergy, in conjunction with the organising committee set up to celebrate with due dignity and devotion that feast, have asked us to have the pleasure to elevate that holy temple, known for its antiquity, beauty and grandeur, and also distinguished for the divine worship and the religious celebrations performed in it, to the title of minor basilica.

“When we brought to mind the glorious memories of that church, we judged that we would accept their appeal. And we are doing this wholeheartedly. Therefore, we listened to the opinion of the Venerable Brother Cardinal Vico, the Prefect of the Congregation of Rites, assessed what was presented to us, and examined whether there are the conditions necessary in a church that has made recourse to that title. 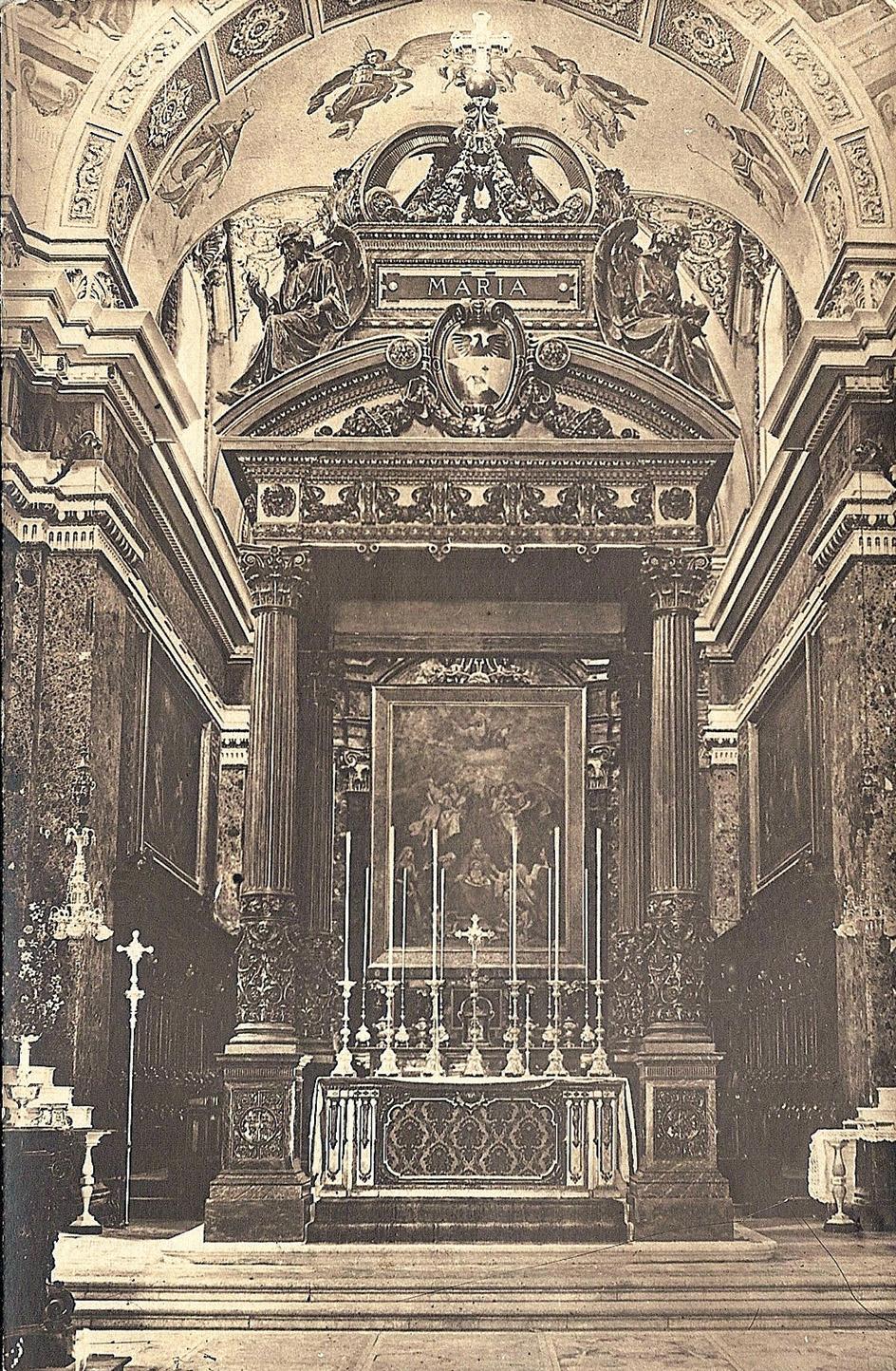 The project was completed and inaugurated on August 26, 1921.

“After scrutinising all this, with our apostolic power and with the power of this decree which never loses its value, we adorn that collegiate church and parish, dedicated to the Nativity of the Virgin Mary in the diocese of Malta, with the title and dignity of minor basilica. We also bestow upon that church all the privileges which the minor basilicas of this city of Rome are entitled to.

“We declare that this script must be and will always be held firm, valid and effective. It must have and be given its full effect. Those who deal with this, now or in the future, should forever grant these rights. We judge and declare that it should be so. From now on, anything otherwise declared, will be considered worthless and useless. Whatsoever any authority does, if it tries to go against this, will be null and void.

“Issued from Rome, St Peter’s, through the power of our seal as Fisherman, on January 3, 1921, the seventh year of our pontificate.

The Te Deum was sung and a telegram from Cardinal Gasparri, with the papal blessing for the people of Senglea, was read.

Many wished that the church would have the papal altar and canopy installed before the feasts of the coronation. Though the period from February to August was too short, determination prevailed. By mid-February, architect Andrea Vassallo had completed the design and plans of the baldachin. On May 27, the main altar was dismantled. In order not to waste too much time, the people of Senglea themselves worked incessantly and free of charge to complete the task, under the direction of Architect Vassallo. On June 12, the foundation stone of the baldachin was laid and blessed by Mgr Caruana. Work continued unabated until August 26 when the project was completed and inaugurated.

A century has passed since these events, and today it is up to us to celebrate this jubilee. However, we must not only stop at what we are commemorating, but also remember that this church, that was given the dignity of basilica, is the consecrated place in which God dwells. In this place we all, as a Christian community, must gather to comunicate with our God and let Him speak to us.

An insignia of the basilica is the Umbraculum. This large, bell-shaped umbrella is made of alternating yellow and red silk stripes. These colours have a reference to Rome and the papacy, and therefore are the sign of the link that exists between the basilica, the Holy See and the papacy. Accordingly, they should remind us of the respect and submission we should have towards the pope.

Another insignia is the Tintinnabulum. This consists of a small bell mounted on a shield bearing the papal symbols of the tiara with crossed keys. Originally, this bell was continually rung with the dual function of summoning the faithful and marking the passing of liturgical processions in Rome. In the resonant ring of the Tintinnabulum we are to recognise the voice of the Lord who calls us to be true Christians always and everywhere.

The main altar of the basilica is called ‘papal’ since it resembles that of the major basilicas in Rome. This altar is covered by the ciborium magnum, also referred to as a ‘baldachin’ or ‘canopy’ erected on four columns. The ciborium enshrines that very spot upon which the solemn, liturgical worship of the church is offered to God, through Christ, in the Holy Spirit. It is akin to the ark of the covenant, which covers and surrounds the Holy of Holies; it is the sacred tent. Therefore, let us seek to enter under the refuge of the ciborium and approach the altar to partake of the sacrifice of our salvation and the Eucharistic meal.