A fortnight after the French captured Malta on June 12, 1798, the local French administration, known as the Commission of Government, favourably considered requests by various citizens to be allowed to print their writings. General Claude-Henri Vaubois, the commander-in-chief of the island, gave his approval on June 27, thus bringing about a theoretical liberty of the press. 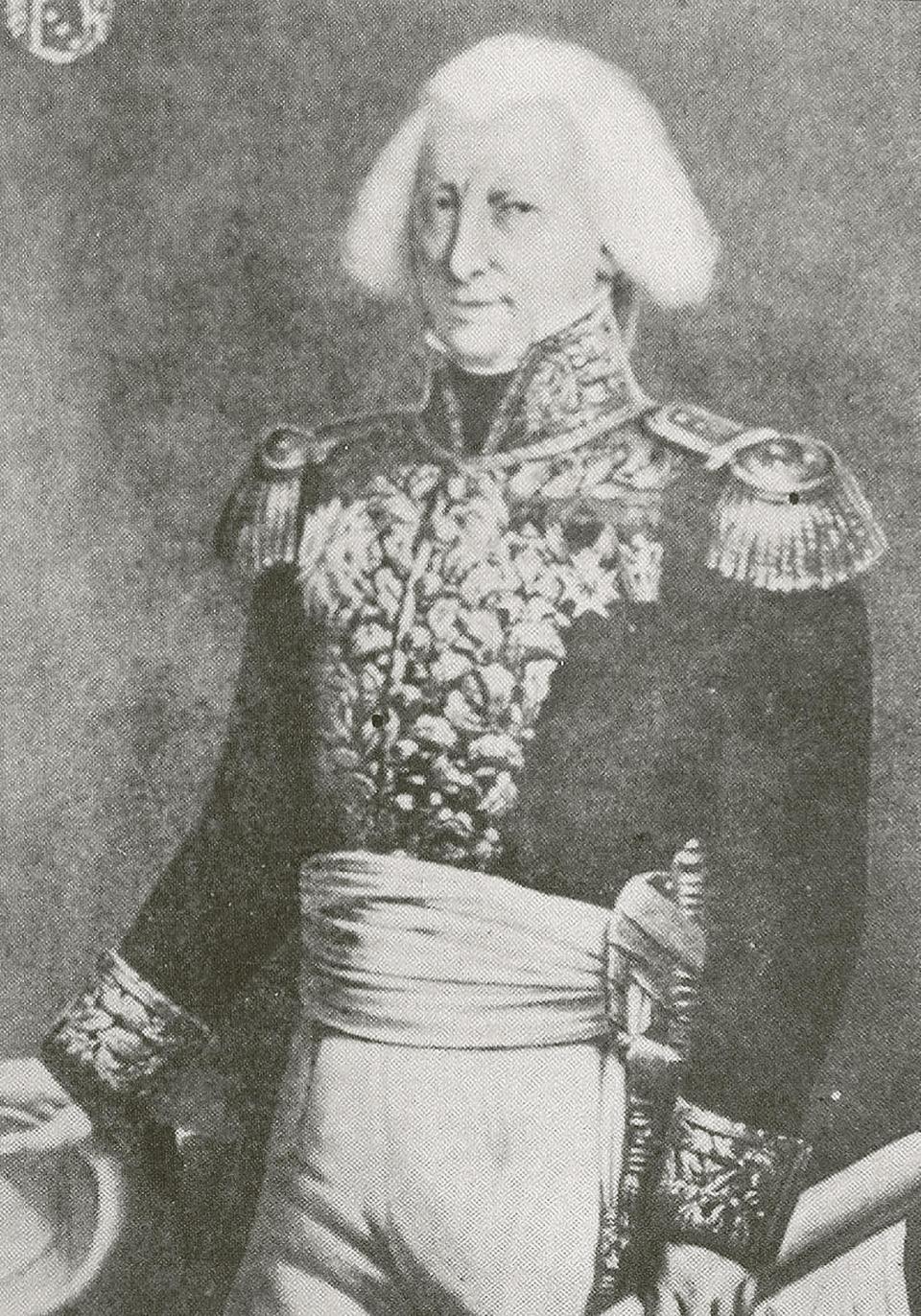 Although in theory this decree removed State pre-emptive censorship, in reality it was nothing more than a sham for the simple reason that the government retained full monopoly over printing in Malta. However, on the other hand, it is to the credit of the French administration that the first newspaper ever to be published in the Maltese islands occurred under their rule, seven copies of which are extant in the National Library of Malta.

On July 28, 1798, the president of Malta’s Commission of Government, Bosredon Ransijat, wrote to General Napoleon Bonaparte – then at the head of the French army in Egypt – and informed him that “a journal, drafted under the best spirit, is being prepared to fulfil the dual purpose of praising with dignity your further and glorious enterprises, and to enlighten the Maltese about the advantages of their union with France”. This letter gives the impression that the publication of the new newspaper was still under preparation but, in fact, the first edition may even have appeared in print up to a fortnight before, perhaps as early as July 14. 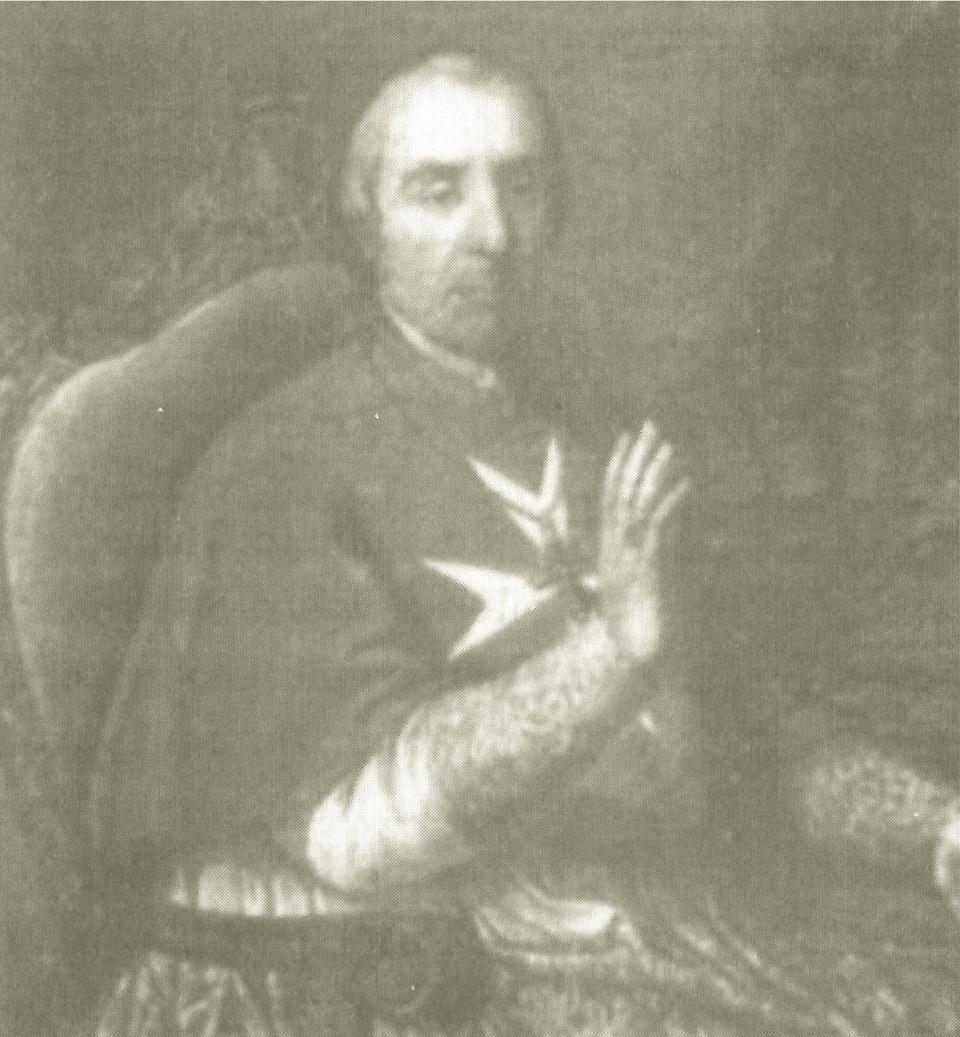 A prospectus of this newspaper, called Journal de Malte, was issued for public consumption, a copy of which is available at the National Library of Malta. It stated that, under its old form of government, Malta could not possibly have had a political newspaper because that form of writing was subject to proscription, but now that the island had been liberated, it was to enjoy all the advantages of a free country, the most important being those of communication with other people and the ability to educate oneself. The best way to achieve these aims, it added, was by having a newspaper managed by disinterested people. 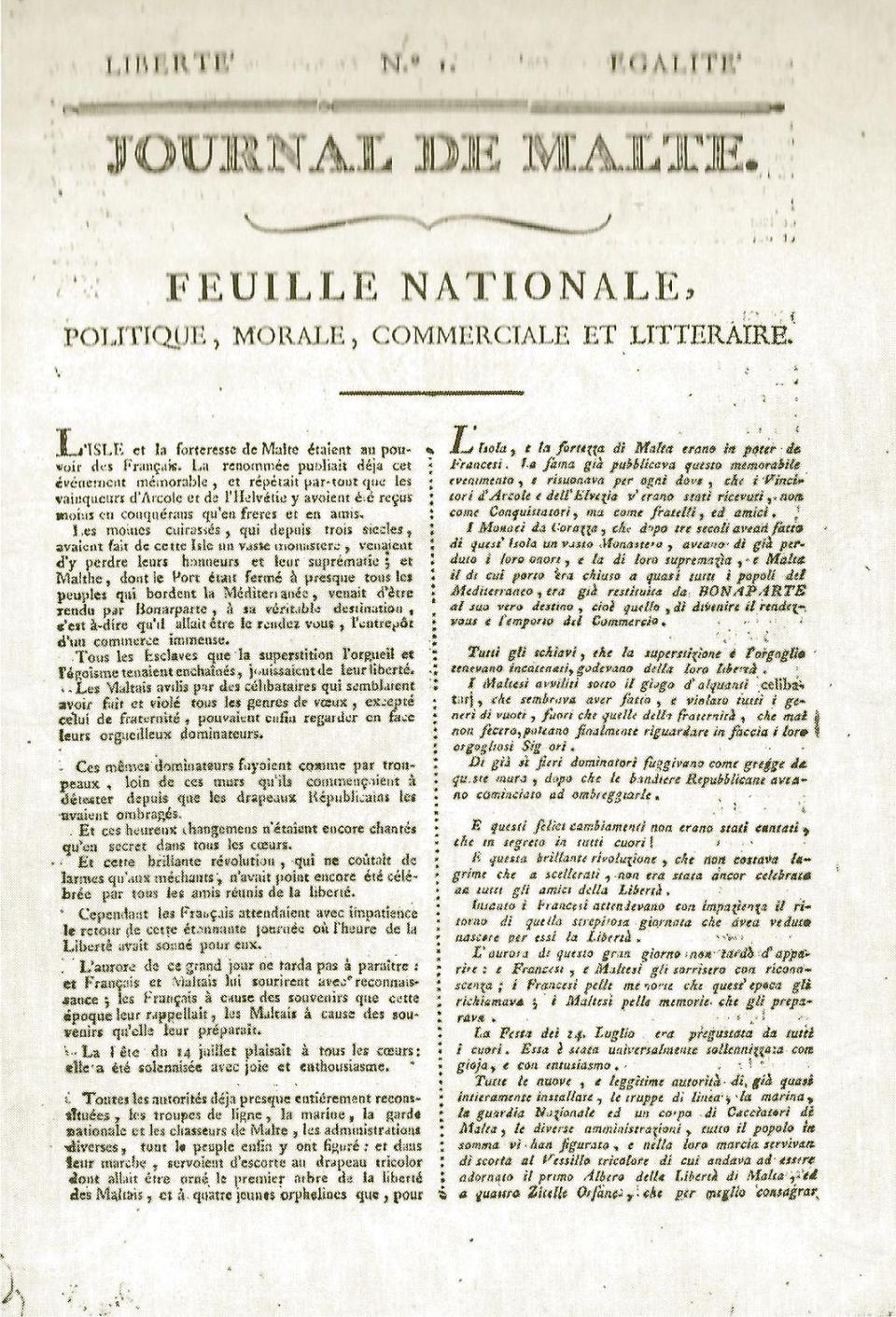 Front page of issue no. 1 of the Journal de Malte, the first newspaper to be published in Malta. Courtesy of the National Library of Malta

The prospectus went on to say what the contents of the paper were going to be, the frequency of its editions and the rate of subscription, before concluding that subscriptions could be paid to the librarian of the National Library who, at that time, was Matteo Rizzo.

Also bound in the same volume with this prospectus at the National Library of Malta is a manifesto proclaiming the publication of another newspaper, which was to be called Malta Libera. Its advertised contents were similar to those of the Journal de Malte but the manifesto does not say when the first number was scheduled to be published.

Actually, no one seems to have ever seen a copy of the Malta Libera. One may, therefore, speculate that the original name of the projected newspaper was to have been Malta Libera but, for some reason or other, it was subsequently changed to Journal de Malte after the publication of the manifesto, thus necessitating the publication of another prospectus, this time for the Journal de Malte.

The newspaper was printed in two columns, the first in French with the second being a translation in Italian. It was headed Liberté – Égalité, and named Journal de Malte. Feuille Nationale, Politique, Morale, Commerciale et Litteraire. The Journal, however, had a rather short life as only a rather limited number of editions were ever printed. The last-known issue – extant at the National Library of Malta – was edition number 10.

Now that the island had been liberated, it was to enjoy all the advantages of a free country, the most important being those of communication with other people and the ability to educate oneself

E. Parnis, in his Notes on the First Establishment, Development, and Actual State of the Printing Press in Malta (Malta Government Press, 1916), said that 12 editions were printed but he does not substantiate his claim. Actually, no one seems to have ever personally seen the claimed editions 11 and 12. 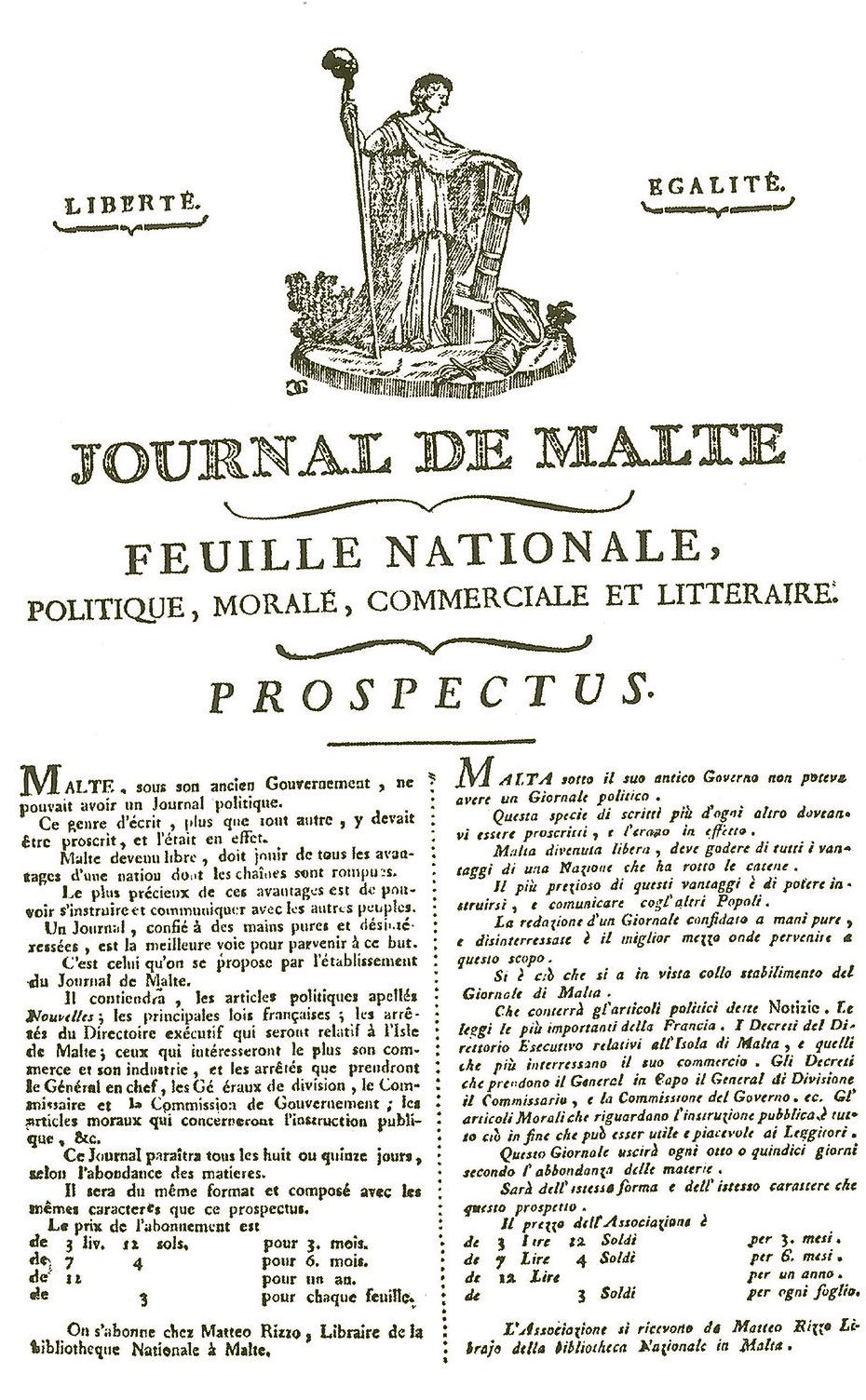 The prospectus of the Journal de Malte. Courtesy of the National Library of Malta

For many years, it was thought that only four editions still existed because the National Library of Malta seemingly only housed the following four issues: nos 1, 3, 4, and 10. However, relatively recent research published by William Zammit in his Printing in Malta 1642-1839 (Malta, 2008) unearthed editions 6, 7 and 8, also at the National Library of Malta. The middle two pages of edition 10 – pages 39 and 40 – are missing.

These editions start off with page 1 on edition 1 and end with page 42 on edition 10. Strangely enough, edition 1 contains eight pages but edition 3 starts off with page 9, leaving a question mark with regard to the pagination of edition 2. Edition 4 contains eight pages, ending on page 20, while editions 6 and 7 each contain eight pages. Again, the pagination of edition 6 starts from page 21 and continues to page 36 in edition 8 – four pages each for editions 6 and 7 but six pages for edition 8. The numbering continues in edition 10, pages 37 to 42, six pages in all, but pages 39 and 40 are missing. The consecutive pagination of the seven known copies strongly suggests that editions 2, 5 and 9 may never have been published at all.

On August 29, 1798, the government established that the print run for the Journal de Malte was to be 500 copies. Whether the print run of the newspaper editions issued prior to this date was smaller or larger is unknown but the quoted official number of 500 copies generally corresponds with the print runs of later newspapers published under the British in the first decade of the 19th century: Foglio d’Avvisi (1803-04), L’Argo (1804) and Il Cartaginese (1804-05).

The projected print run very probably reflects the potential market at the time. Efforts to disseminate copies beyond the precincts of the harbour towns were also carried out since it is known that, at least at various times, copies were sent to the countryside municipalities. 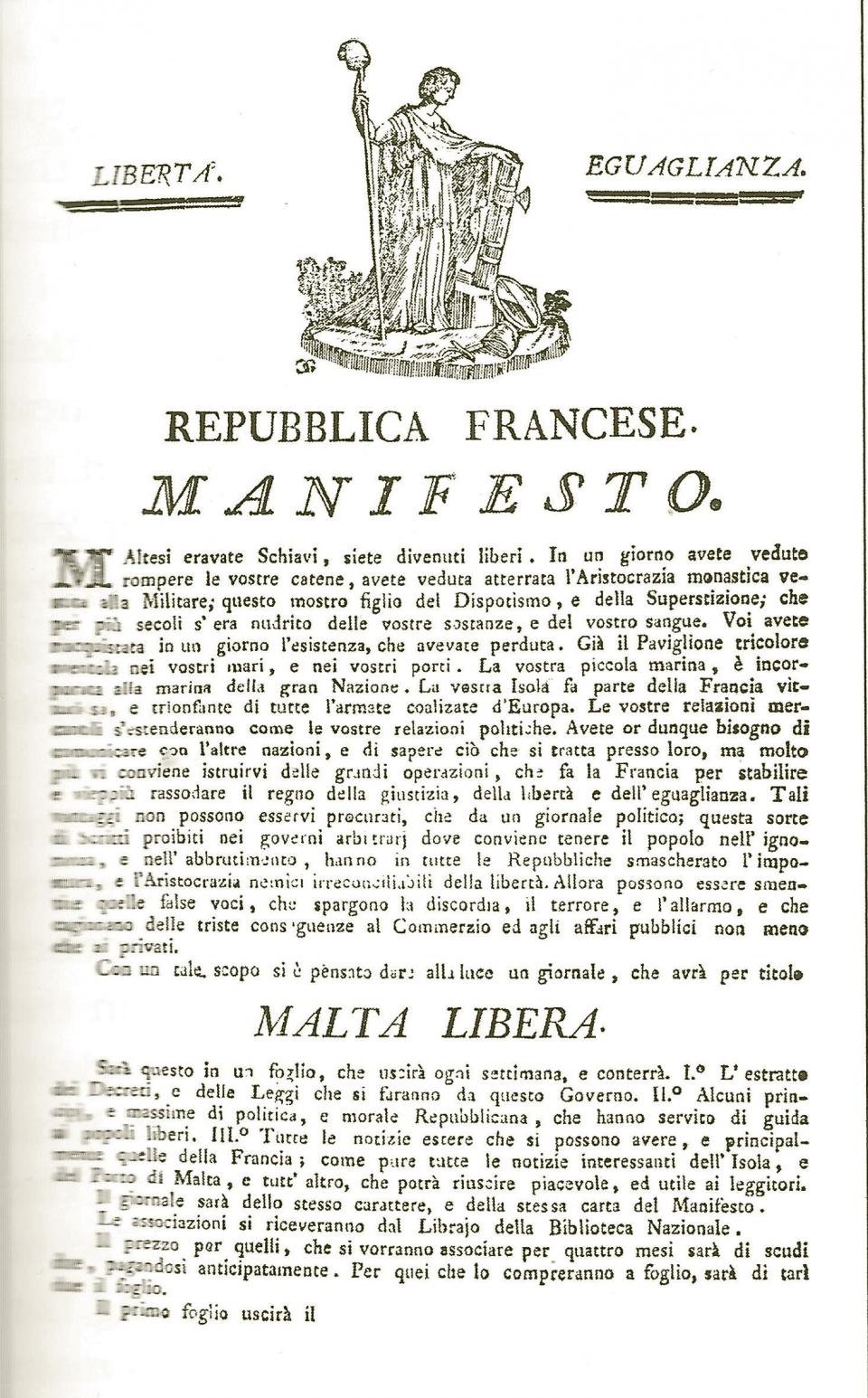 The manifesto of the Malta Libera. Courtesy of the National Library of Malta

The contents show quite clearly the aims of the newspaper: propaganda in favour of the French and to try and indoctrinate the people who, however, were mainly illiterate. The publications include speeches delivered in various French Republican celebrations held in Malta and do not have any journalistic value except propaganda-wise. There were also unsigned editorials together with local and foreign news with a profound pro-French bias.

Edition 4, dated August 12, 1798, also included a pastoral letter by Bishop Vincenzo Labini, probably to try to calm a seemingly already restless population. The pastoral letter was also printed in single-sheet format and it had to be read in all parish churches, always in the presence of a local municipal official.

In a way, such propaganda was to be expected. After all, the French were at war with the rest of Europe at one time or another, and resorting to propaganda in the occupied territories or countries was indispensable. But even if circumstances justified the end result, the credibility of the contents was doubtful and certainly did not go very far in soothing the resentment of the locals.

Edition no. 10 is dated 5 Vendemaire, An 7 of the Republican Calendar (September 26, 1798) and consists almost exclusively of the speeches delivered to commemorate the sixth anniversary of the setting-up of the French Republic on September 22, 1792. However, by this time, the Maltese had already risen up in an armed revolt for over three weeks and the French were besieged within the walls of the Grand Harbour area. This insurrection spelled the end of Malta’s first newspaper which, however, was the herald of many more in the succeeding two centuries and has come to be regarded as the forerunner of the future (and present) Malta Government Gazette.

Dr Joseph F. Grima is a historian and retired assistant director of education and casual lecturer of History whose publications include Malta u Franza 1798-1800, The Press and Censorship in Malta 1642-1839 – A General Survey, and The Fleet of the Knights of Malta – Its Organisation during the Eighteenth Century).