Over a century-and-a half-ago, in 1866 to be precise, the month of October witnessed the inauguration of the Royal Malta Opera House – or It-Teatru Rjal as it was popularly known. In 1873, it was destroyed by fire and, coincidentally, it was reinaugurated four years later, also in October.

On April 7, 1942, the opera house was almost completely demolished by enemy action during World War II and, for over six decades, remained a running sore to be viewed by all and sundry when entering Valletta. It was quite recently partially rehabilitated and now serves as an open-air theatre, known as Pjazza Teatru Rjal, which was inaugurated on August 8, 2013.

The site of the opera house was formerly occupied by Palazzo Lanfreducci, which was demolished between May and September 1861 to make way for the projected new building. The opera house was built to plans and designs drawn up by Edward Middleton Barry (1830-80), professor of architecture at the Royal Academy from 1873 to his death, whose major works include Covent Garden Theatre in London. Barry’s original designs had to be modified because of the sloping side streets which necessitated the addition of a wide terrace in front of the building. Incidentally, this is the only original part of the theatre still standing. 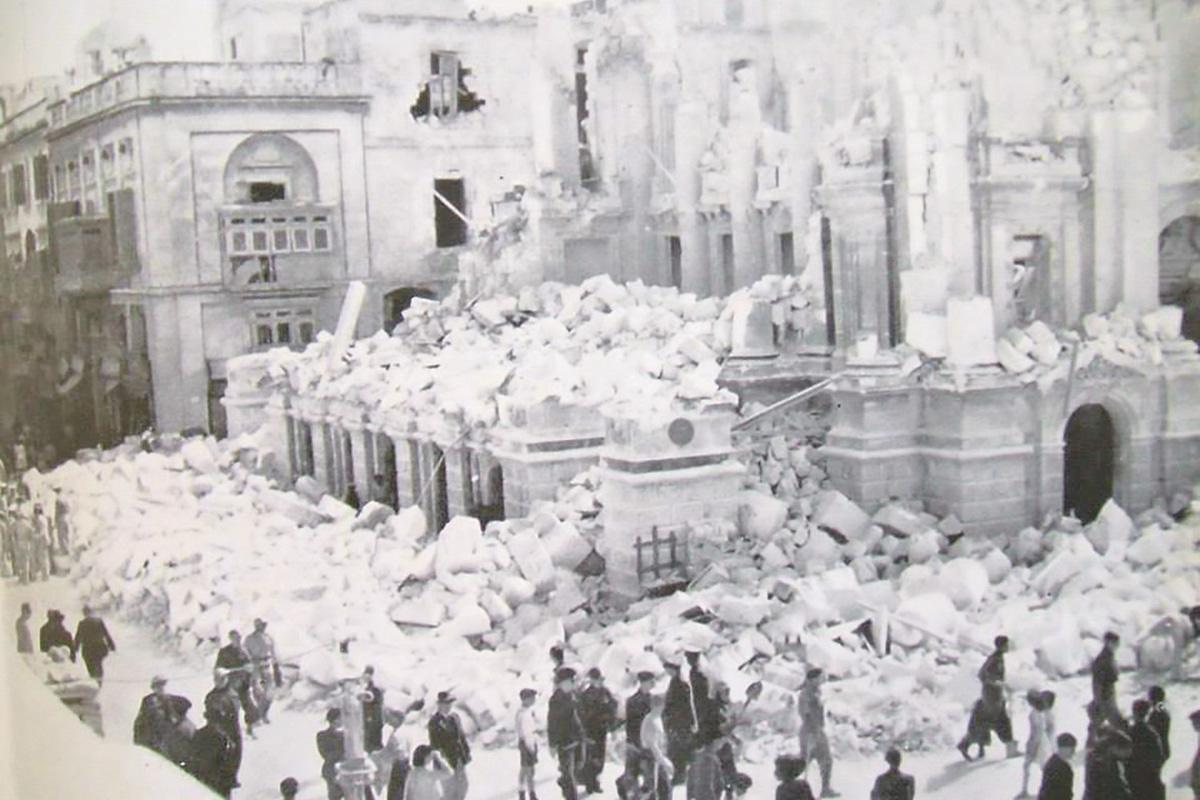 The Royal Opera House after it was bombed during enemy aerial action in 1942.

The first building contractor to be engaged was Francesco Mangion, who was dismissed in 1862 mainly because of inefficiency. Construction work was then entrusted to Michelangelo Azzopardi, under the superintendence of a surveyor in the Land Revenue Office, Salvatore Fenech. The stage machinery was contracted to Messrs Luigi Frendo and Achille Amato, while Messrs Emmerson and Murgatroyd were responsible for the interior gas works. Gas installation was carried out by the Gas Company. The estimated cost of this new opera house was about £60,000, a very large sum of money for those days.

The Malta Observer of October 11, 1866, carried a quite extensive description of the new opera house, built in the classic style. It was described as the “most beautiful ornament of which Malta can justly boast”, both in its interior and exterior designs. A word of praise was reserved for the way the boxes were arranged, in a radiating manner, such that everyone in any box was able to view the stage properly. Its seating capacity was 1,095, with an additional standing accommodation for 200 people.

Tenders for the first four-year lease of the new opera house were issued on March 28, 1866, and awarded to Maestro G.W. Malfiggiani, who was therefore the new theatre’s first impresario. On his shoulders rested the responsibility for organising the opening night. 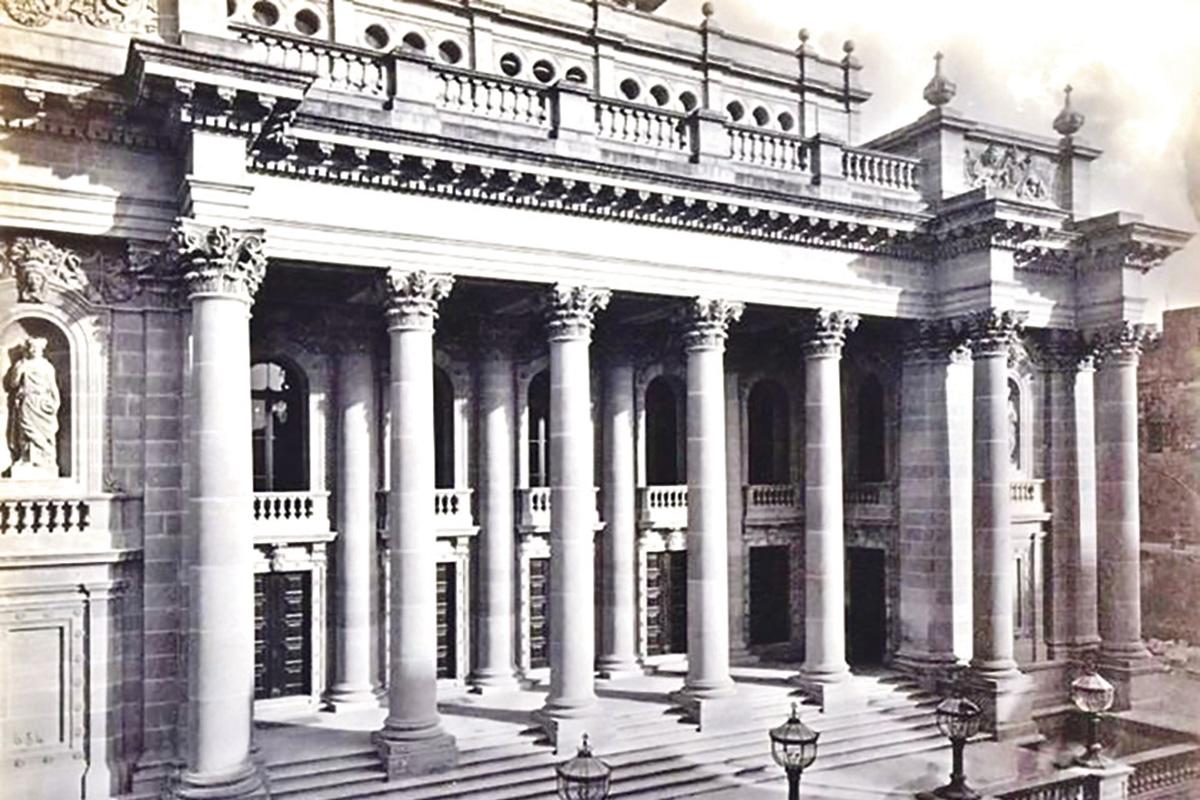 The imposing façade of the Royal Opera House.

Within four years, the Royal Opera House was rebuilt to its former pristine glory

Originally, the inauguration had been scheduled for October 1, but it was actually carried out on October 9, 1866. A full house in uniforms, full dress and decorations attended with the Acting Governor, Major-General Ridley. The first opera to be staged was Vincenzo Bellini’s I Puritani, which was greeted with mixed feelings by the local newspapers’ opera critics. The first leading singers were Adelina Luppi (soprano), Enrico Serazzi (tenor), Adriano Pantaleone (baritone) and Mario Raffaele della Terza (bass). The orchestra was conducted by Maestro Domenico Amore and sets were by Antonio Morconi. 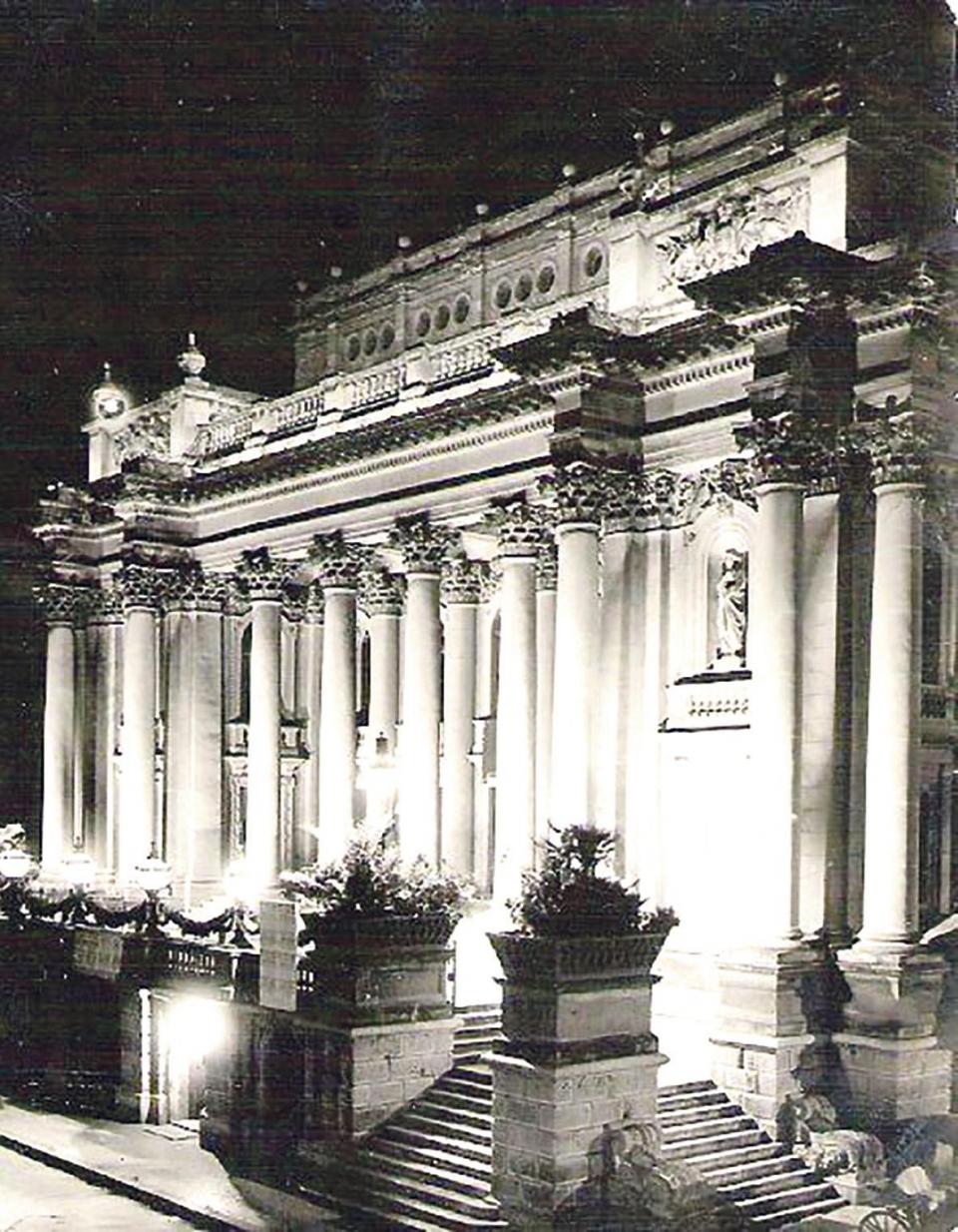 The façade of the Royal Opera House lit up at night.

On May 25, 1873, misfortune hit the Royal Opera House. During the third act of a new opera, Giuseppe Privitera’s La Vergine del Castello, at about 10.10pm, one of the paper scenes (incidentally, it was the work of the well-known Maltese artist Giuseppe Calì) came into contact with a naked gas flame and, within five minutes, the whole stage was ablaze. The efforts of the Police and the Services availed nothing and, by 3.30am, the theatre was in ruins. Fortunately, the fires did not spread to other buildings, including the nearby powder magazines; otherwise, the damage would have been incalculable. 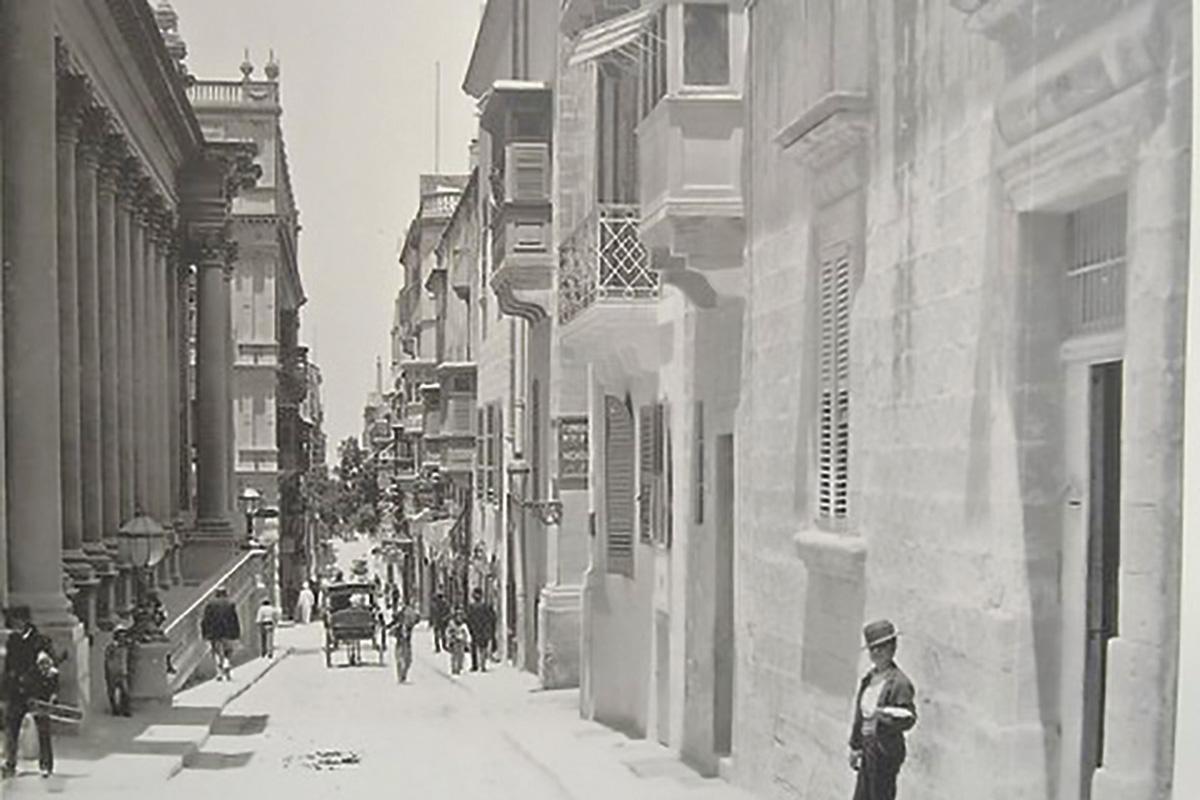 The side elevation, on South Street, of the Royal Opera House.

Fortunately, no lives were lost but many sustained hardships since none of the property, whether private or governmental, was insured. Mro Privitera, a Sicilian composer, lost all his manuscripts; the impresa lost all the costumes, scenery and some stage equipment; the orchestra players lost their instruments.

Within four years, the Royal Opera House was rebuilt to its former pristine glory. Its former specifications were adhered to, but a few internal modifications were carried out. It had 97 boxes in five tiers and could once more accommodate over a thousand people within its spacious interior. The work was carried out under the direction of architect Webster Paulson (1837-87) and cost over £4,000.

The inauguration night was set for October 11, 1877 – almost 11 years to the day since its first inauguration – when the theatre was reopened with a performance of Giuseppe Verdi’s Aida. At the time, it was a very recently-written opera and it was having its Malta premiere, but it became so popular locally that it was to appear no less than 31 times in the annual repertory till the outbreak of World War II in 1939.

In 1916, the management of the Opera House carried out some structural and seating alterations that resulted in an increased number of seats. Between 1929 and 1930, other improvements were initiated, which included the renewal of the wardrobe and scenery, the replacement of the stage curtain at a cost of £300, the lining of boxes with wall-paper and the installation of electricity in the first four tiers.

During the succeeding years, the Royal Opera House was the setting for innumerable operatic and other presentations in which household names, including local singers and actors, took part. However, activities were cut short by the intensity of enemy action during the autumn/winter months of 1940-41 which made attendance at the opera house, in Valletta next to Grand Harbour, a very dangerous proposition indeed. 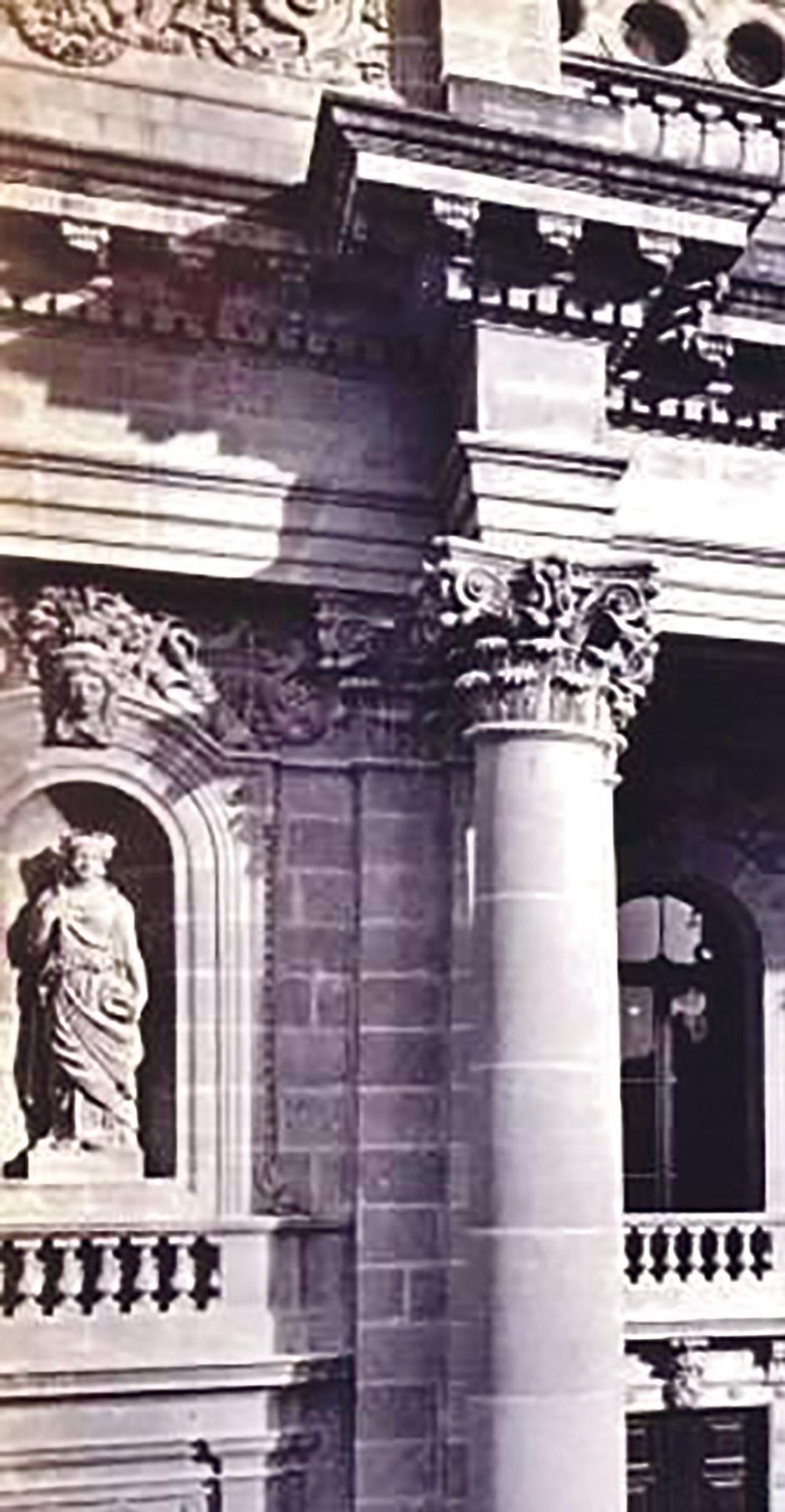 A close-up of a column and a statue in the façade of the Royal Opera House.

However, it was actually opened for a very brief spell between January 6 and 12, 1941, when the Malta Operatic Company, under the baton of Mro Giuseppe Camilleri, presented Gaetano Donizetti’s L’Elisir d’Amore, the last work ever produced at the Royal Opera House. The singers who took part were Mary Ciantar, Arthur Galea, Joe Bezzina, Harry A. Cachia and H. Cassar Mallia.

On April 7, 1942, at 6.30pm, the opera house was hit by high explosive enemy bombs. Direct hits on the foyer totally destroyed the façade and left the auditorium in a shambles. It was never to be rebuilt to its former pristine glory, and remained, grim and derelict for over six decades. Its site now houses an open-air theatre, opened in 2013 and known as Pjazza Teatru Rjal, designed by Renzo Piano, which in no way compensates for the beautiful building that once graced the entrance into Valletta, and which, in the opinion of many, is more akin to Roman archaeological remains, as was once pointed out to me by a tourist.

Dr Joseph F. Grima is a retired casual lecturer of history and assistant director of education whose publications include histories of Malta under the Order of St John and the French and The Fleet of the Knights of Malta: Its Organisation during the Eighteenth Century. 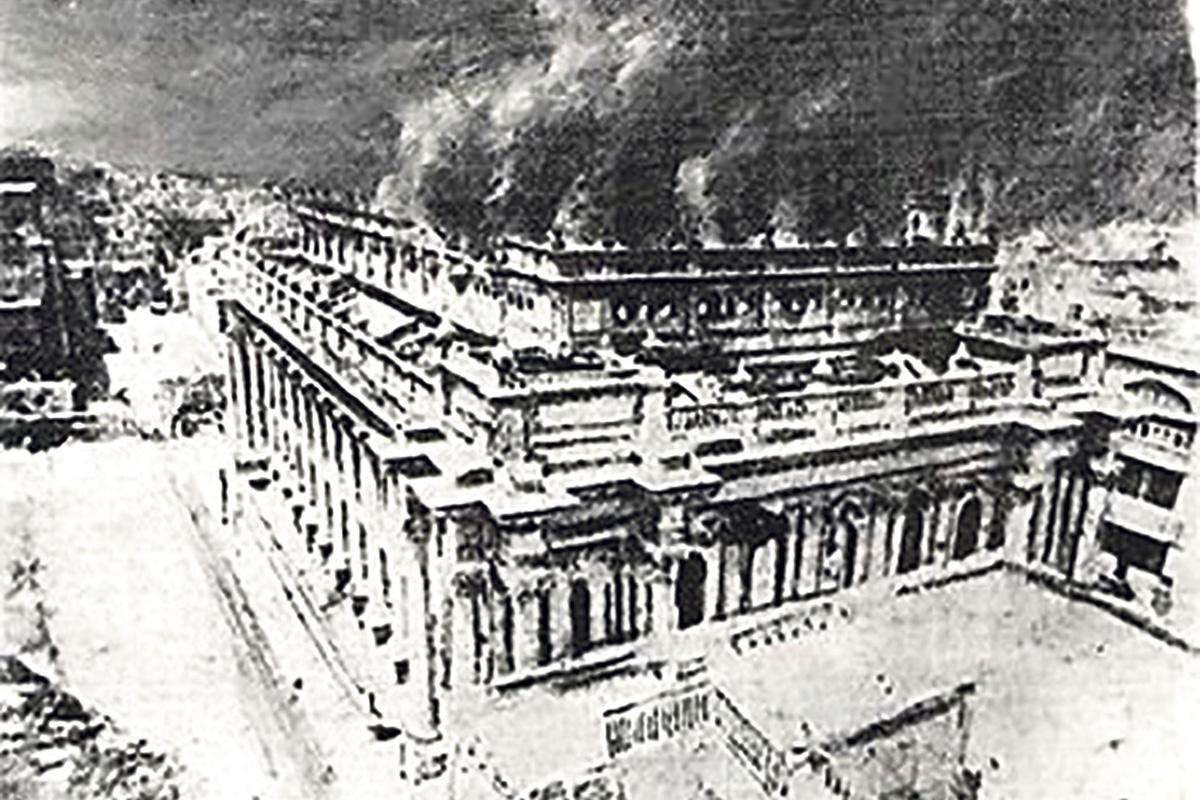 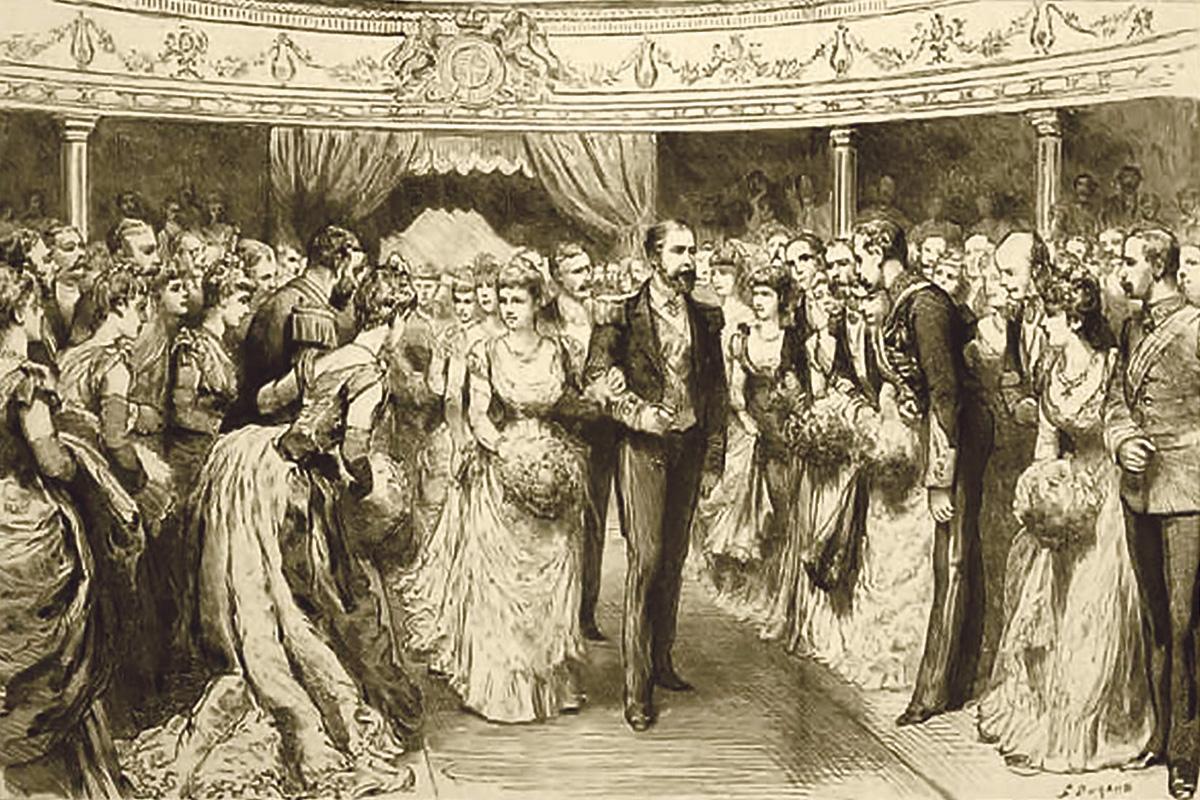 A Grand Naval Ball given by the Duke of Edinburgh at the Royal Opera House in 1889.