The first months of 1957 offered turmoil. Malta was living social and political turbulence. Socially, the Maltese community was still picking up the pieces from war devastation: eyes focused on reconstruction. Employment conditions were improving though not fast enough.

At the time, the Services employed around 19,949 people, the government employed 15,942 and private industry engaged 41,000 workers. Salaries averaged around six pounds weekly.

Infrastructure was being upgraded to allow for Maltese entry into the post-war industrial world. Maltese harbours were being redesigned, allowing for larger vessels. Nationally, the 110-volt electricity supply was being systematically replaced by a 240-volt distribution system.

Politically, the major theme was ‘integration’ but other sub-plots, like emigration and the Caravaggio paintings endured. The Maltese Labour government wanted to integrate Malta with Great Britain as a way of improving national social conditions. Under the scheme, an insistence on “equivalence” would render Maltese citizens on par with British counterparts, including representation in Westminster.

Contributing further to turmoil, George Borg Olivier, leader of the opposition, after a strong speech in the Legislative Assembly on January 4, proceeded to London for a private visit. Everyone was guessing whether he would ever return to lead the Nationalist Party.

J. Frendo Azopardi, acting party leader, directed opposition members out of parliament to protest the British government’s lack of consultation on the new constitution being drafted for Malta.

Cinema was the primary entertainment venue. Valletta had 6,200 cinema seats and Sliema had 5,500. Towns and villages had their own cinema hall. The running of this industry was anything but smooth. Regulations of June 1956, though reached after protracted negotiations among stakeholders led by the government, had proved ineffective. The idea of having a two-and-a-half hour programme with different seat prices did not work well for patrons. The papers carried ample complaints from dissatisfied consumers. 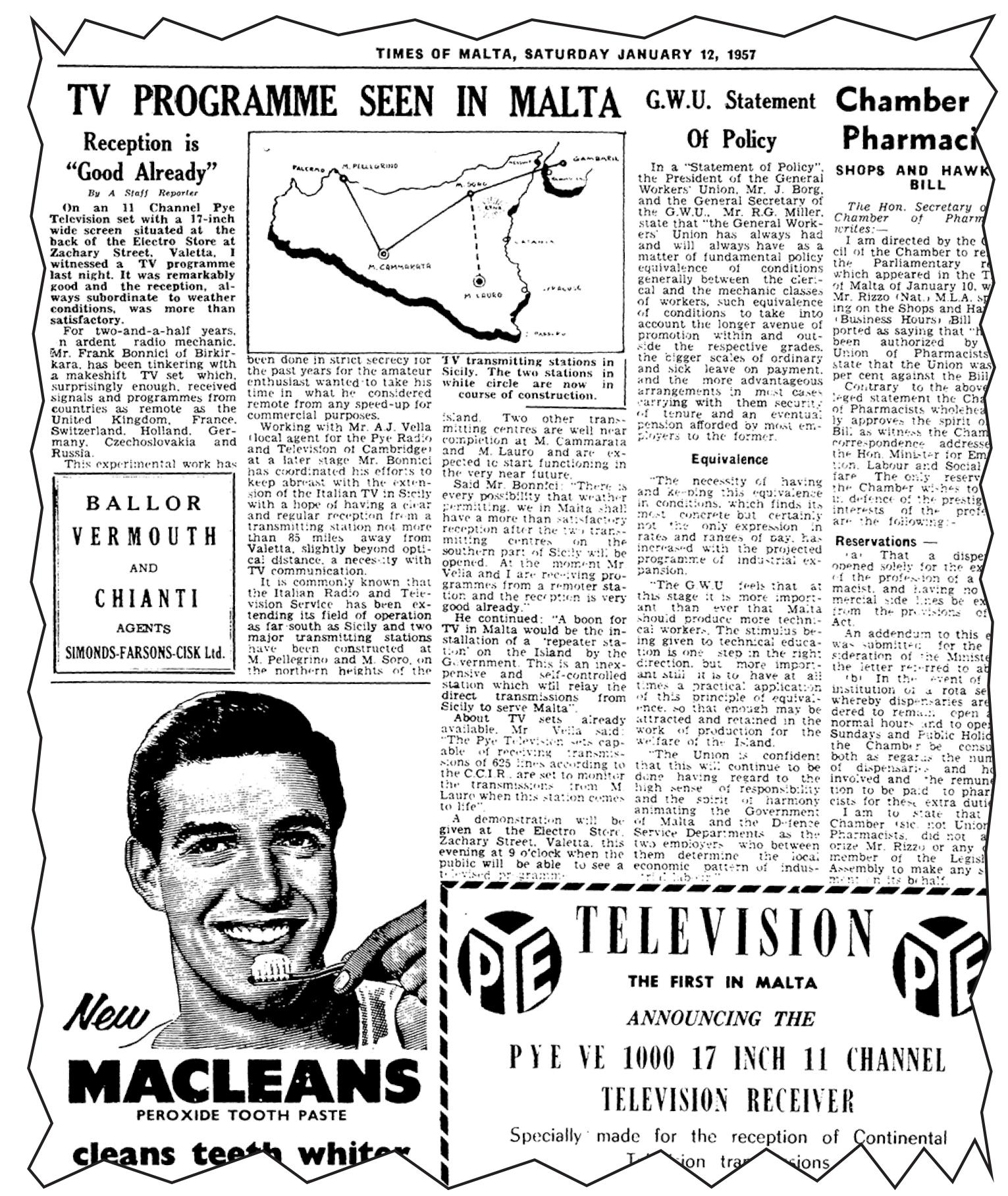 The article on the Times of Malta of January 12, 1957, announcing the first successful TV transmission from Sicily and the first advert for a 17-inch PYE TV set (bottom right).

Within this mayhem, the Times of Malta of January 12, 1957, announced ‘TV programme seen in Malta: Reception is good already’. Frank Bonnici (radio mechanic), in conjunction with A.J. Vella (local agent for PYE Radio and Television of Cambridge at the Electro Store in Zachary Street, Valletta) managed to capture the Italian TV signal transmitted from Monte Pellegrino and Monte Soro the previous evening.

To prove their point (and offer a subdued sales pitch), the owners offered to display the achievement in their shop window in Zachary Street at 9pm. The paper carried the first advert for a 17-inch PYE television set (mentioned in the article) on the same page. A less detailed contribution, without the advert, was carried on Il-Berqa, the Maltese newspaper also published by Allied Newspapers.

Within weeks, different TV brands besides the PYE TV set were promised. The first sets advertised were primarily the 17-inch (c. 43cm) and 21-inch (c. 53cm) models. The former sold for around £105 and the latter models came at £125. A hefty investment given the salaries!

Both price tags included aerial installations. Dealers advertised their product offering a viewing every evening after 5.30pm, continuing until 10pm with a break between 7.30 and 8.30pm. People flocked to Valletta to be able to see the innovation. In spite of the price tag, within the first two months after the January announcement, adverts appeared in the Times of Malta (see table below).

The introduction was not without a glitch. Although local reception improved with the relays at Monte Lauro and Monte Cammarata coming online, still Maltese low-lying areas had difficulty receiving a quality signal. Many sought the solution in a local relay station. But this begged the bigger question: who would create and manage the local relay?

Potential customers were asking other questions: would purchasing a set now be future proof? The BBC was still using a British Standard of 405 lines, while European Broadcasting was using a CCIR signal based on 625 lines. Systems were incompatible!

And while the social and political mayhem continued, unknowingly a new era in Maltese social and cultural life was inaugurated. The bubble insulating local communities was burst and many more islanders were brought into contact with the outside world. Voice could now be accompanied by images and a new focus for people’s attention emerged. So did more diffused cultural and social comparisons.

Saviour Chircop is an associate professor at the Department of Media and Communications, Faculty of Media and Knowledge Sciences (MaKS), University of Malta.