The Opposition leader should get rid of shadow minister Jason Azzopardi in light of a National Audit Office report which found serious shortcomings in a 2012 land transfer that happened under his watch, Justice Minister Owen Bonnici said this morning.

Speaking at a press conference, Dr Bonnici claimed that Dr Azzopardi had met with developer Zaren Vassallo ahead of a deal for the Löwenbräu brewery site in Qormi being struck to assure him that a compromise could be found.

The allegation was immediately denied by Dr Azzopardi, who in a press statement said that he would be filing libel proceedings against the minister on Monday, saying the allegation was "a lie from beginning to end".

"Owen Bonnici and the most corrupt government in history... are now making up things that the Auditor General never said," Dr Azzopardi said in his response to the minister.

Dr Bonnici's reaction upon hearing that he was about to be sued was succinct. "Be my guest," the minister said, according to a PL press release which derided Dr Azzopardi's reaction as "hysterical".

Minister Bonnici had told the press early this morning that this was a clear test for PN leader Simon Busuttil, who has repeatedly called for good governance, to take action against one of his own.

“The Opposition leader on several occasions said that if he finds out someone was in the wrong, he would have them out within seconds. I am now calling on Dr Busuttil to do just that,” Dr Bonnici said.

The audit office said in its report last month that it had several concerns about the transfer of the site of the former Löwenbräu brewery in Qormi. 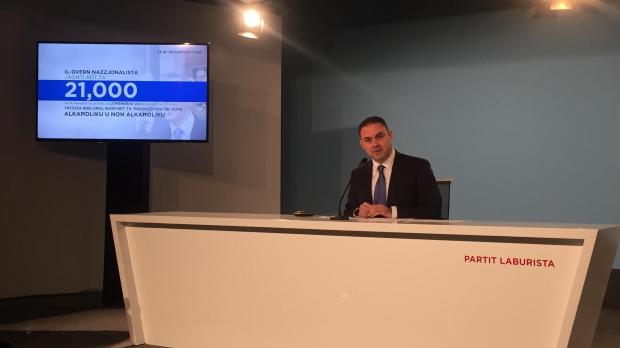 In 1990, the land was allocated on a perpetual basis to Löwenbräu Ltd. In 2009, the company redeemed the ground rent for €465,875 with government simultaneously consenting to the cancellation of conditions.

This was later deemed to be in breach of applicable legislation and corrected through a contract of exchange in 2012, when the freehold value of the land was set at €706,400.

This value was based on estimates dating back to 1990, the minister said, adding that this was clearly a “mediocre estimate”.

The land’s actual value in 2012, Dr Bonnici went on, should have been valued at €8 million.

In its report, the NAO had said that Dr Azzopardi, who was the Minister for Fair Competition, Small Business and Consumers at the time, "shoulders an element of responsibility for the serious shortcomings noted in 2012, for he was aware of, yet failed to question, the grossly misrepresentative value of the land."

There is no love lost between Dr Bonnici and Dr Azzopardi, with the two having crossed swords late last year after the PN MP wrote that Dr Bonnici had "lied to parliament".

Speaker Anglu Farrugia had subsequently ordered Dr Azzopardi to retract the statement - something he refused to do, tweeting "Forget it. I will not cower, nor bow. Truth is inconvertible."