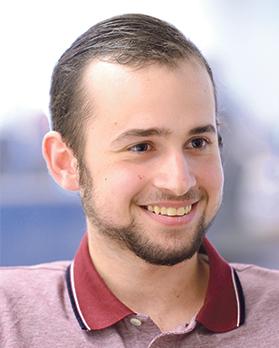 Jerome Frendo died yesterday, aged 20. This photo was taken as he spoke with the Times of Malta last year. Photo: Matthew Mirabelli

Jerome Frendo, known for his resilience, passed away yesterday morning after three bouts with cancer in three years.

The family of the 20-year-old broke the news on Facebook, with his younger brother, Jethro, urging prayers for his relatives.

“Even though it hurts very much to see him go, I personally think it was the right thing to happen. Seeing him in pain for three years and eight months, knowing you can’t do much to help him, we did our best,” he said.

Many were shocked by the Mr Frendo’s death. Until two weeks ago, he  was still active on social media. In a short clip with his girlfriend, Martina Fenech, who has also battled cancer, he appealed for blood donations and financial support to Puttinu Cares.

The foundation’s latest marathon, held at the end of September, was dedicated to the young man himself, who, sadly, could not make it because he was receiving treatment.

Ms Fenech told the Times of Malta she would always hold dear the love and respect Mr Frendo gave her.

"He adored me and he was always fighting for a future together.

He used to support others, even when he was weak himself. In fact during these past days he was a bit unwell, and before I leave his side he would tell me: bye Mar, good night. I love you a lot, and thank you for everything. If you need anything, call me."

"He was very brave, always with a smile on his face, taking life day by day… he did not give up until the very last breath."

In an interview with this newspaper last year, Mr Frendo spoke about how much it had pained him to miss the 2015 marathon.

I woke up today, so I do what I can do today

In comments after being given the all-clear following his second diagnosis, Mr Frendo said he lived life day by day. “I cannot spend every day worrying about the following day. I woke up today, so I do what I can do today.

“No one has seen tomorrow.”

One Carmen Deguara described Mr Frendo on Facebook as “a great young man who, in his short life, succeeded to teach us all what life and love really mean”.

He was of comfort to many, even those who had never met him but followed him on social media, Puttinu Cares vice chairwoman Angele Cuschieri told this newspaper yesterday.

Ms Cuschieri said she would never forget his altruism and the way he managed to inspire people who had heard about the way he dealt with his ordeal.

Her colleague and Puttinu CEO Rennie Zerafa said Mr Frendo seemed to leave a mark on anyone he bumped into and he had definitely become part of Puttinu’s journey.

His words have been imprinted on a poster just outside the Rainbow Ward at Sir Anthony Mamo Oncology Centre, home to Puttinu, which, in Mr Frendo’s words, not only helped him financially and materially but also psychologically. “Stay strong – there’s always a rainbow after every storm,” the placard reads.

A celebration of Mr Frendo’s life will take place tomorrow at 3pm. Holy Mass will be celebrated by Albania Archbishop George Frendo OP at the Dominican church in Rabat. It was the young man’s wish that people attending his thanksgiving Mass do not wear black.

Instead of flowers, the family would appreciate a donation to Puttinu Cares Foundation.