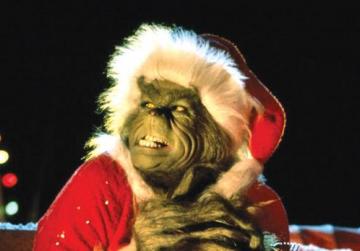 Hollywood star Jim Carrey has told how he was given training from an expert who advised the CIA on dealing with torture as he coped with a gruelling make-up regime in one of his movies.

The star had to endure a “horrendous” daily ordeal lasting eight-and-a-half hours as he prepared for his performance in children’s film The Grinch.

In an interview for BBC1’s Graham Norton Show, to be screened tomorrow, he said he also listened to hits by The Bee Gees to calm him as he spent long hours being turned green for the role.

It was like being buried alive each day. On the first day I went back to my trailer, put my leg through the wall and told [director] Ron Howard I couldn’t do the movie

He said of the make-up process: “It was like being buried alive each day. On the first day I went back to my trailer, put my leg through the wall and told [director] Ron Howard I couldn’t do the movie.

“So a guy that trained CIA operatives how to endure torture was brought in. That’s how I got through it.

“That, and The Bee Gees - the only thing that worked to calm me through the make-up was everything they had ever done. I’ve no idea why, but they just made me happy. There’d be no Grinch without them.”

Carrey also told how in the early part of his movie career, his drug use meant he cared little about anything other than where to score his next batch.

“I couldn’t really enjoy it because I was stoned. But now I am clear headed and really enjoying myself – I’m having a good time. Back then all I ever cared about was my next fix,” he told chat show presenter Norton.

The interview is being screened on BBC1 tomorrow at 10.35pm.