Joseph Muscat has been cautioned against allowing the Panama affair from becoming a millstone around the Labour Party’s neck, according to inside sources.

While the Prime Minister is convinced he can weather the storm that has engulfed two of his most trusted people, others in the party are concerned the matter will not go away.

Party insiders speaking to this newspaper on condition of anonymity said Dr Muscat was advised not to let the controversy become what the €500 ministerial salary increase was for the Nationalist Party in the last legislature.

“The €500 increase kept surfacing at each turn and caused the PN a lot of damage before the election and the Panama scandal risks doing just that for Labour if the Prime Minister does not remove [Energy Minister] Konrad Mizzi and [chief of staff] Keith Schembri,” the sources said.

Dr Muscat has so far stood behind both men. In Dr Mizzi’s case, the Prime Minister is relying on an independent audit to determine any future decisions but has shied away from addressing Mr Schembri’s case with particular vigour.

Sources said Mr Schembri posed a bigger problem for the Prime Minister because of the “close relationship” they had. 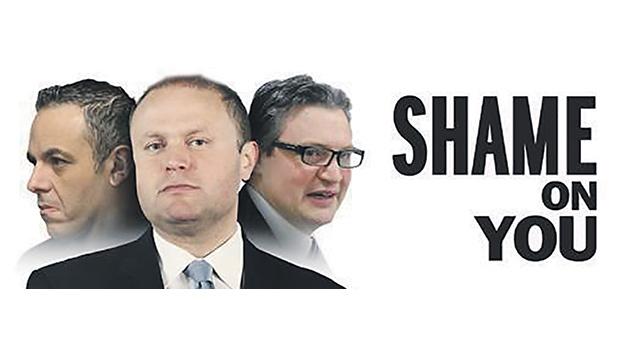 The billboard against the Panama affair.

“The Prime Minister will never remove Keith Schembri or allow him to leave and this risks perpetuating the crisis for the rest of this legislature,” the sources said.

Last Sunday, Dr Muscat put on a brave face when addressing supporters at the Labour club in Marsaxlokk. While skirting the Panama scandal he insisted the government still had more to do in this legislature.

He also attempted poetry by insisting the government’s response to criticism was to work harder for the common good. This was reflected in the message conveyed by the Labour Party’s billboards. Over the past few days, the ‘Lady in Panama’ billboards targeting PN president Ann Fenech, were replaced with ‘Success’, trumpeting record GDP growth of 6.3 per cent.

But Dr Muscat also quelled election speculation, adding it would be held in two-and-a-half years’ time.

The event was a show of force by the Labour hard core, who turned out in droves. But sources said the MaltaToday survey published on the same day was cause for concern because it put the two major parties within reach of each other even though Labour maintained a slim lead.

“The Panama scandal has given the PN cause for hope and unless Joseph Muscat acts fast to stem the haemorrhage it will continue to hurt the Labour Party,” the sources said.

This sentiment was reflected last Sunday by Labour Whip Godfrey Farrugia in an interview with the online news site Newsbook. He acknowledged that the Panama scandal had a negative impact on Labourites and floating voters.