Four court judges examining law students prior to obtaining their warrants cleared two of them despite their having criminal records that barred them from becoming lawyers, the Times of Malta is informed.

The situation was considered so serious that both the Chief Justice and the Chamber of Advocates filed an official objection about it with the President of Malta, court sources said.

A spokesman for Justice Minister Owen Bonnici yesterday confirmed that the ministry had been informed about the matter and had taken steps to address it.

“The Justice Ministry can confirm that it is well aware of the objection raised and has decided not to invite the two students involved to be given their warrants. Instead, they have been asked to regulate themselves with the law,” the spokesman said.

Insisting that it was the examining judges and not the President of Malta or the ministry that had given the green light, the spokesman said the two students had decided to withdraw their warrant application.

The law regulating the issue of lawyers’ warrants lays down a series of conditions.

Of good conduct and good morals

Apart from the academic qualifications required, the Code of Organisation and Civil Procedure states that “No person shall be entitled to obtain the warrant unless he/she is of good conduct and good morals.”

The law also stipulates that students must first be duly examined and approved by two judges, who shall issue, under their signature and seal, a certificate attesting that they have found the student examined “to possess the qualifications and that he is competent to exercise the profession of advocate in the courts of Malta”.

The sources said the interviewing judges had been informed of the criminal record of Thomas Sant, 30, of Qormi and Yanica Barbara, 28, of Attard. However, they still proceeded to give their consent allowing both to obtain a warrant to practise law.

Their case dates back to 2010, when they were found guilty and given suspended sentences for theft and document falsification.

The court warned Ms Barbara that what she had done could have serious implications for her career, since she had already started studying law.

Ms Barbara was employed last year by the government as a senior policy officer at Malta’s Permanent Representation in Brussels. It could not be immediately established if she had been subjected to any security screening, as is normally done for diplomats. 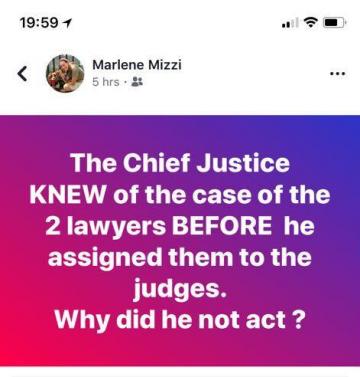 The court sources remarked that “the decision by the four judges is inexplicable and further damages the administration of justice on the island.”

Malta is one of the few European countries where warrants for lawyers are still issued by the government. Elsewhere, warrants for various professions are normally regulated by the professions themselves through their respective organisations.

In a Facebook post, MEP Marlene Mizzi, who is the wife of Judge Antonio Mizzi, criticised the Chief Justice saying he knew of the case of the two students before he assigned them to judges. She asked why he did not act.