All monarchs since recorded history have claimed a prerogative they believe to be inherent in their sovereign role: to override the course of justice, the law and the courts.

In Malta, this entitlement to disregard the strict requisites of the rule of law had been exercised with abandon by the grand masters at the time of the Order and went on being exercised, with slightly less abandon, by the governors in the name of the British monarchs, during the colonial period.

Today, it goes by the name of presidential pardon or prerogative of mercy, regulated by article 93 of the constitution. 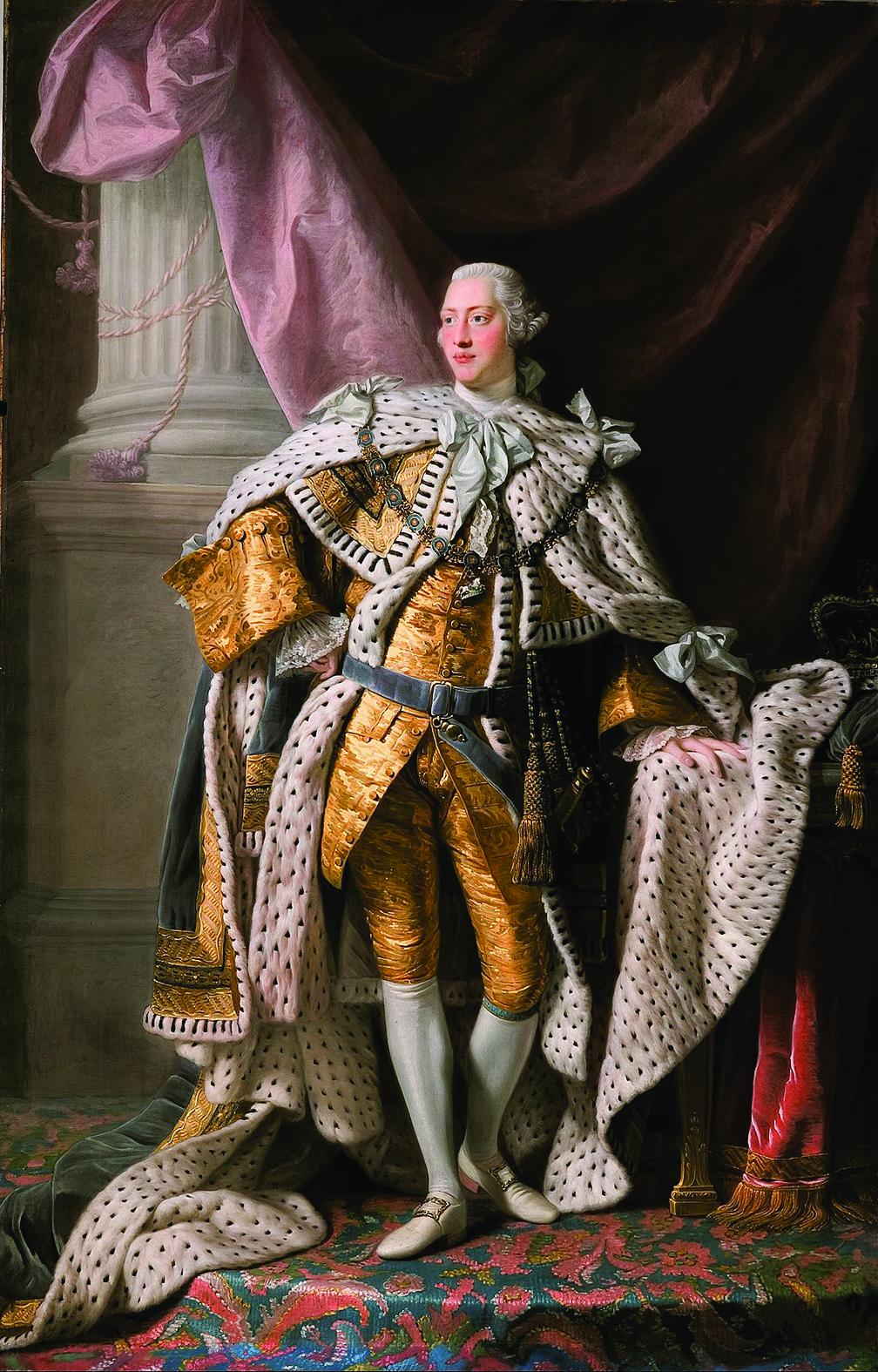 King George III in whose name the first pardons and amnesties were granted.

Under the common umbrella of prerogative of mercy, or free pardon, or amnesty, or ‘receiving the proclamation’ (ħa l-proklama) they actually huddle several distinct scenarios: a pardon, conditional or otherwise, after a suspect has been convicted by the courts, a stay in criminal proceedings which are still pending, before the definitive judgment, or a promise of impunity from prosecution, or of a more moderate punishment, to persons, known or unknown, to reveal the major culprits in serious criminal offences, to lead to their eventual conviction.

Today, it goes by the name of presidential pardon

In this feature, I will be dealing with only one type of ‘pardon’: the total or partial remission, by the British governor, of a punishment already decreed by a criminal court, usually, though not invariably, of the death penalty. I have tried to trace all these instances in the early years of colonial rule, from 1814 to 1834. Maybe the various other types of ‘pardon’ will form the subject of subsequent papers. 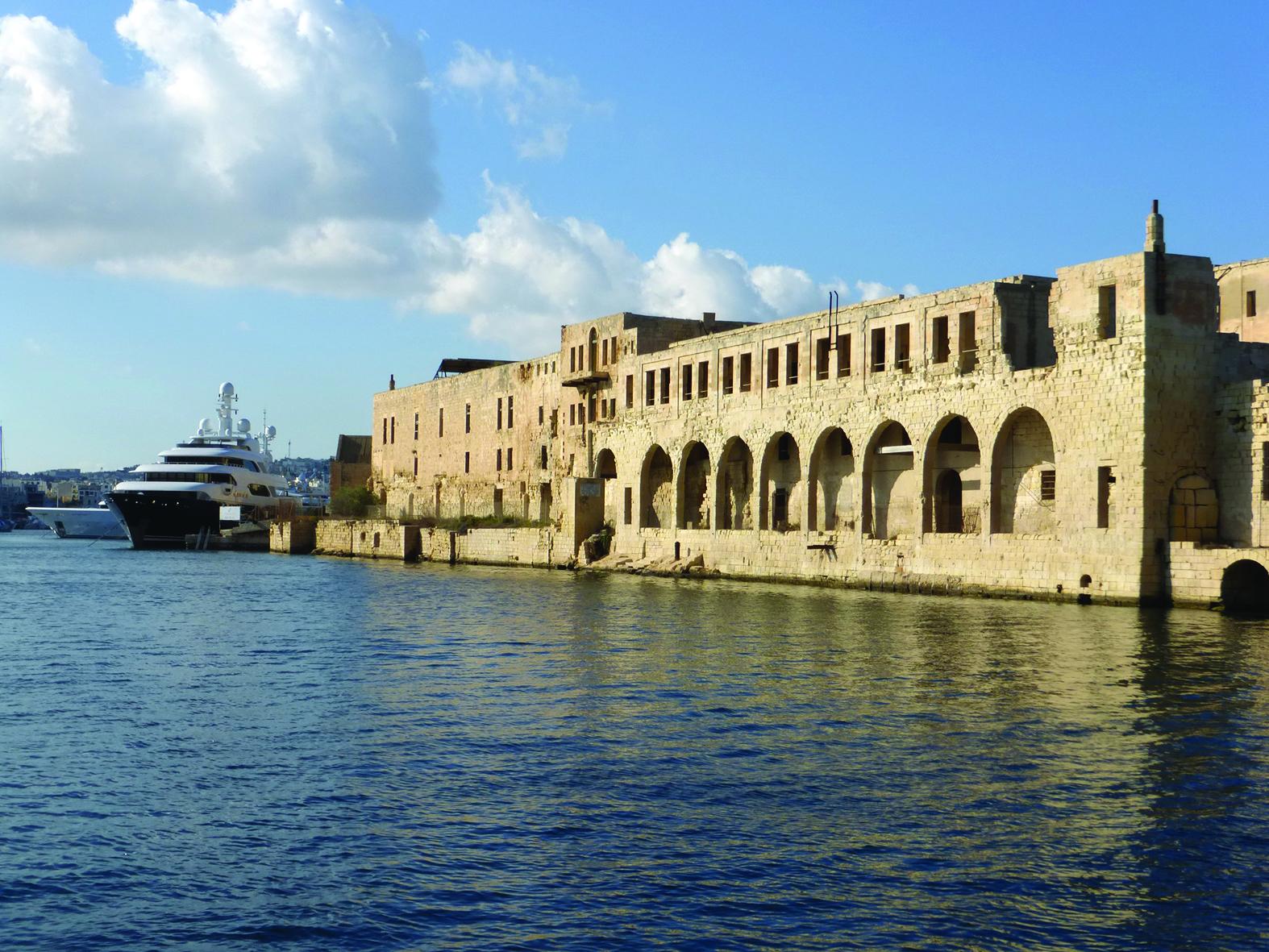 Lazzaretto on Manoel Island, scene of a pardoned crime.

All these pardons were given publicity by government notices or proclamations in the Government Gazette (which changed its name more than once).

They were invariably issued solely in Italian. Usually, the governor explained to the people the reason why he felt he should interfere in the course of justice. Did he always give the real reasons or was it sometimes the reason he believed the people would believe or like to hear?

The first pardon I came across, Governor Thomas Maitland, ‘King Tom’, extended to Felice Camilleri, condemned to death, and Pasquale Tobia, to public whipping and 10 years hard labour in public works. The court had found them guilty of stealing from the Lazzaretto, on Manoel Island, merchandise imported from abroad and there undergoing quarantine and disinfection. 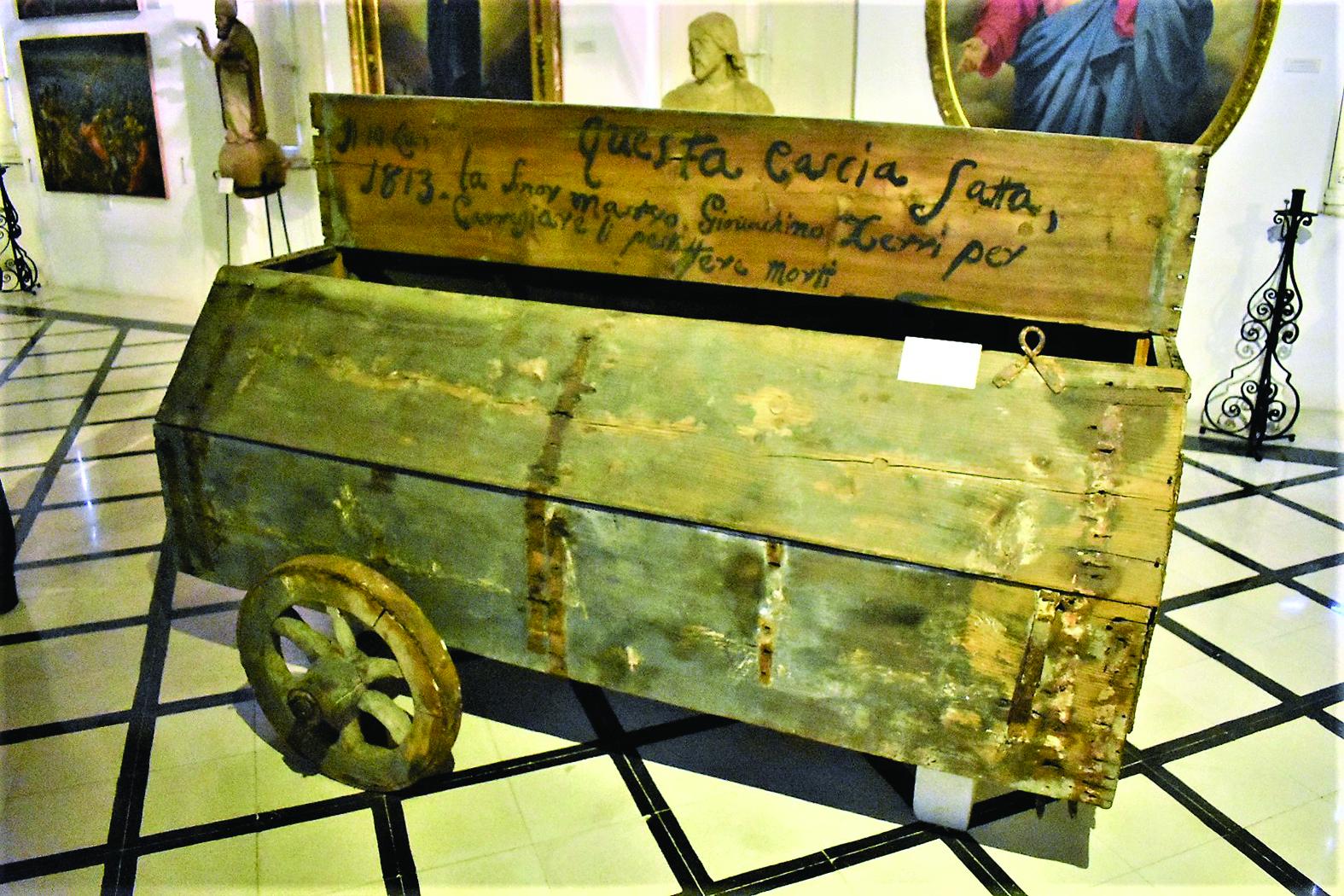 A cart used for disposing of dead bodies during the great 1813 plague. Photo: Courtesy of the Żabbar Parish Museum

This just followed the devastating plague of 1813-14 which had taken its toll of an estimated 4,500 lives. Maitland gave a long public explanation why he felt he had to interfere with the course of justice following this ‘atrocious crime’.

He declared he had been pressurised by many to overrule the judgment of the court and that he had resisted at first, keeping in mind the lethal effects the theft could have had on the population. 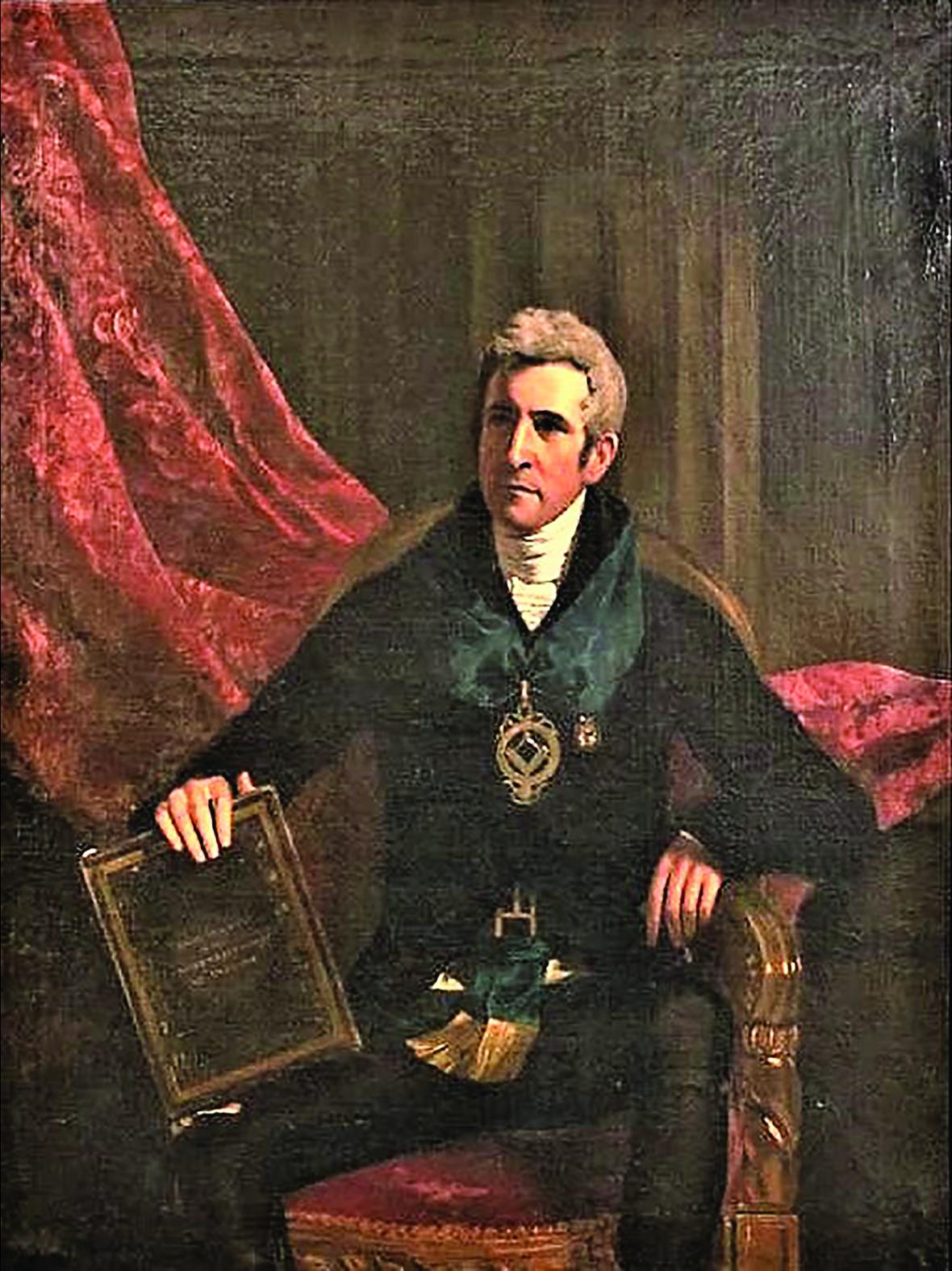 Waller Rodwell Wright, the British jurist who presided over one of the trials which ended in the prerogative of mercy being exercised.

But, as this was the first case of capital punishment inflicted after the reforms of the judicial system since the British monarch had assumed dominion over Malta, he relented.

Under his sovereign’s rule, Maitland affirmed, the severity of justice was invariably tempered by clemency and compassion, compatibly with the health and safety of the population. These were the only reasons that urged him to grant a full pardon to the two delinquents who, purely out of greed, had endangered the health of the whole nation. 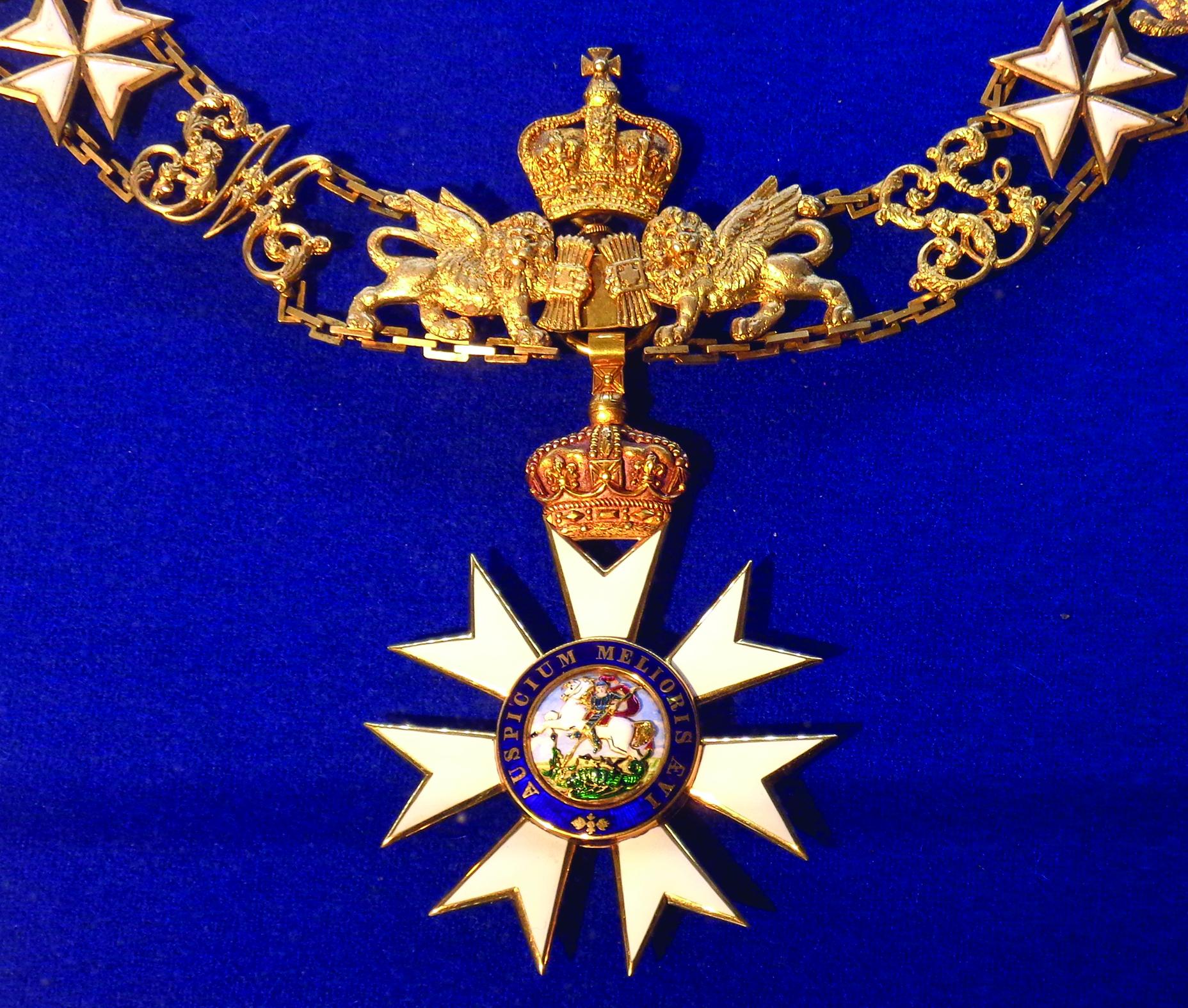 A high decoration of the Order of St Michael and St George on its foundation, when a large number of criminals were amnestied.

‘King Tom’ later taught fit to celebrate King George III’s royal birthday in 1815 by granting an amnesty to a number of convicted lawbreakers. A bizarre logic bolstered this amnesty: the people are expected to rejoice at having more delinquents running loose in society – eight convicted criminals set free to make this happy occasion happier still.

The list of the handpicked fortunate ones included Giuseppe Bonello, a lifer for theft; Giuseppe Busuttil, who had sneaked back into Malta from exile, hoping not to be caught, and condemned to hard labour at the discretion of the government; Giuseppe Tanti, Giuseppe Santoro and Giuseppe Sciberras, all guilty of carrying prohibited weapons and condemned to two years’ hard labour; and Giuseppe Portelli for theft, undergoing one year’s hard labour – six Josephs in a row, the elective name for criminals. Then also Clemente Borg and Andrea Vella, both working through one year’s hard labour for theft.

A bizarre logic bolstered this amnesty

Shortly later, Maitland saved three North Africans from the gallows. They had been found guilty of an unnamed crime by the Admiralty Court, for the first time sitting in Malta with a jury, made up of three Brits, three Maltese and six foreigners. The reason given for this pardon: the novelty of the Admiralty Court making use of jurors. 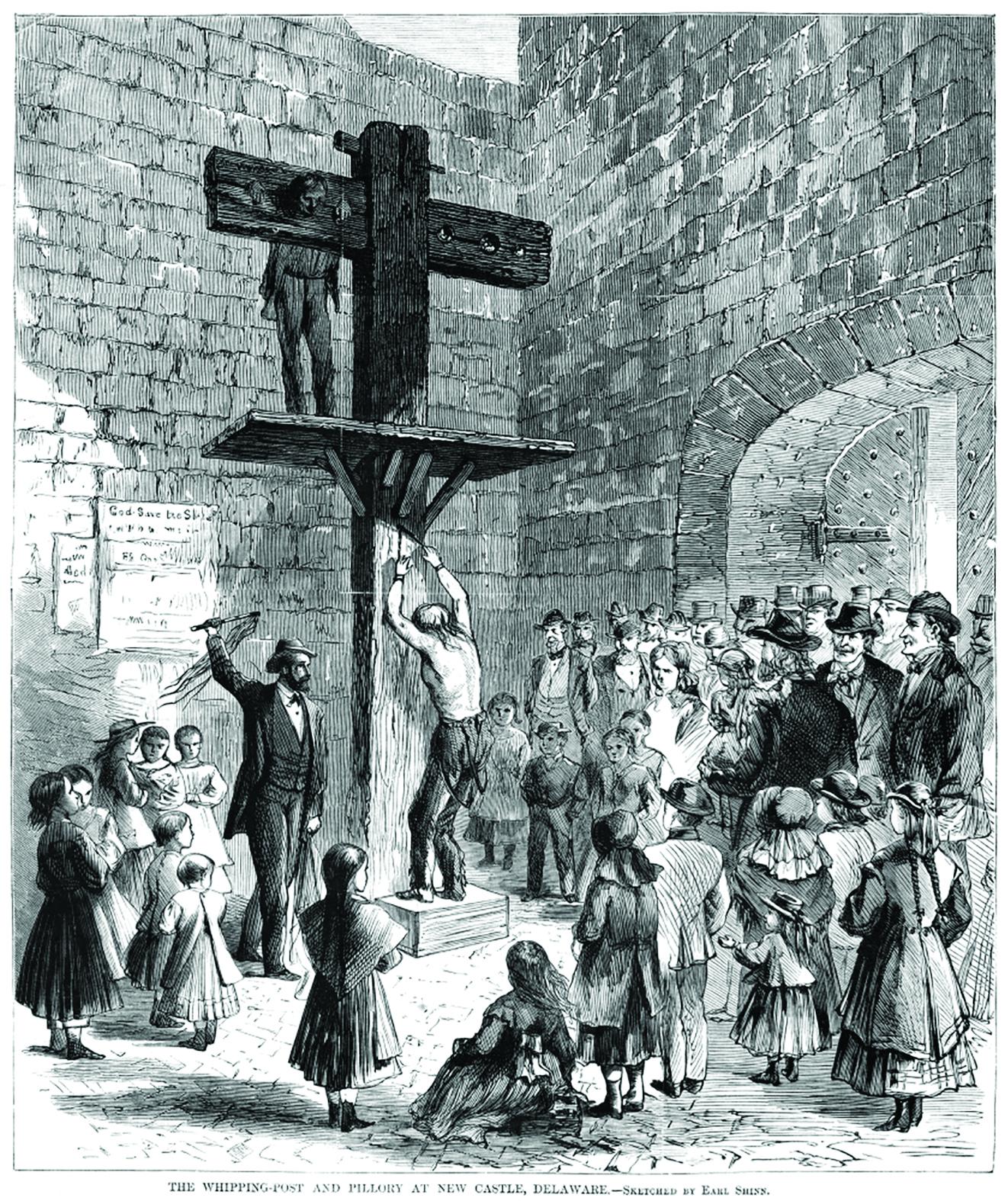 Public whipping was a common form of criminal punishment.

Two conditions qualified the pardon: that the three would remain manacled and fed bread and water until a vessel could be found on which to expel them from Malta and that the death penalty would revive should they ever be found again on the island. This, I believe to be one of the few instances when the prerogative of mercy was exercised by a government notice, rather than by proclamation.

Maitland set free eight other convicted felons to celebrate his return from the UK in October 1816. Giuseppe Tonna, Michele Stivala, Demetrio Ascovich, Ludovico Buhagiar, John Brown, Salvatore Caruana, Luigi di Francesco and Giovanni Tachella undoubtedly rejoiced. The public, probably less. The notice gives no details of what crimes the beneficiaries of this amnesty had been convicted, possibly not to alarm the public. 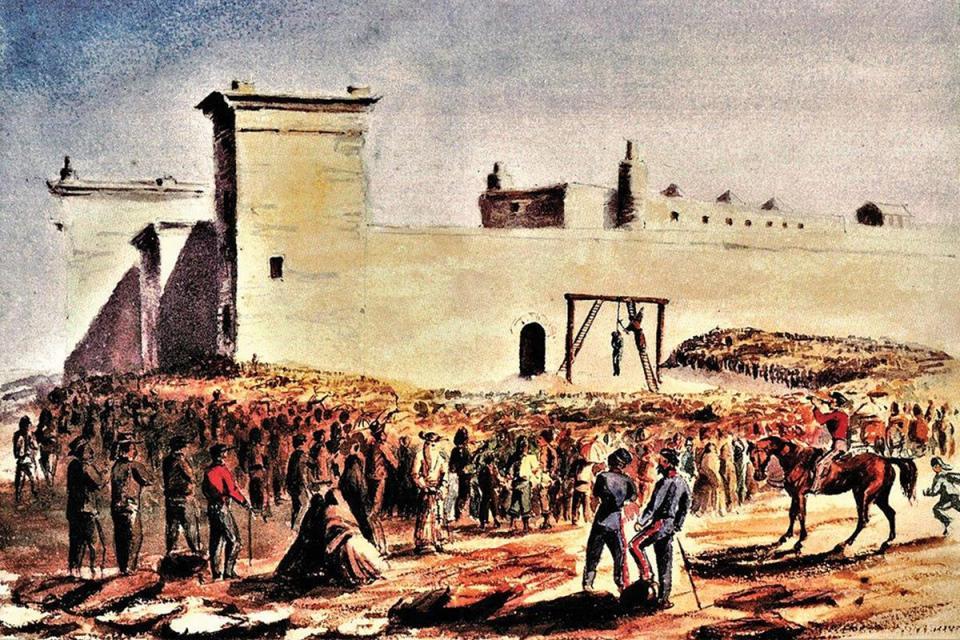 Many Maltese found piracy and barratry irresistibly attractive – the latter the crime of defrauding the owner of a vessel, committed by the captain or the crew. Both crimes carried the death penalty.

In 1817, all Malta bristled with news of the trial of Salvatore Diacono and Tommaso Frendo, accused of the “alarmingly frequent” crime of barratry. Frendo suffered execution but Maitland believed that Diacono had been ‘seduced’ to a life of crime by the evil influence of Frendo and another who had since died.

The glacis in Floriana, where most public executions were carried out during the early British rule.

In view of the previous good conduct and the young age of Diacono (and the unspoken fact that he came “from a respect­able family”), the governor decided to commute the death penalty to 14 years’ deportation to New South Wales in Australia – probably among the very first Maltese ‘settlers’ in Australia.

A local paper gives more details of this trial, presided over by Maitland personally and by Waller Rodwell Wright, a British barrister, later chief justice in Malta. The entire proceedings only lasted 12 hours. They were accused of maliciously sinking a vessel skippered by Diacono off the coast of Morea, possibly as an insurance fraud. Wright addressed the court in fluent Italian − he was an erudite classical scholar. The guilt of the accused was established to such a degree “that it would be absurd to require greater proofs”. 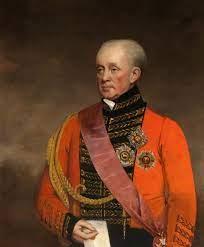 Sir Thomas Maitland known as ‘King Tom’, the first British governor of Malta, in whose name early pardons were issued.

On the day fixed for their execution, both convicts were led to Floriana with the hangman’s noose round their neck. After Frendo’s execution, the Pro­vost Marshall took an interminably long time to give the signal to proceed to the hanging of Diacono and, eventually,  read out Maitland’s reprieve instead. The prisoner, already on the gallows, received the news “with the most lively feelings of gratitude”.

Maitland grabbed the occasion to advertise his aversion to a crime that “causes such fatal disorder to the commercial community and covers its authors with so much dishonour”. He also announced solemnly that never again would he show clemency in relation to this crime.

The parish records of St Mary’s Cathedral, Sydney, still record Diacono in Australia in 1821 when he wrote to the parish priest a letter in Italian, asking to receive confession. It was only in 1833 that New South Wales and Van Diemen’s Land (today the island of Tasmania) were officially designated as the places where people deported from Malta had to be sent. 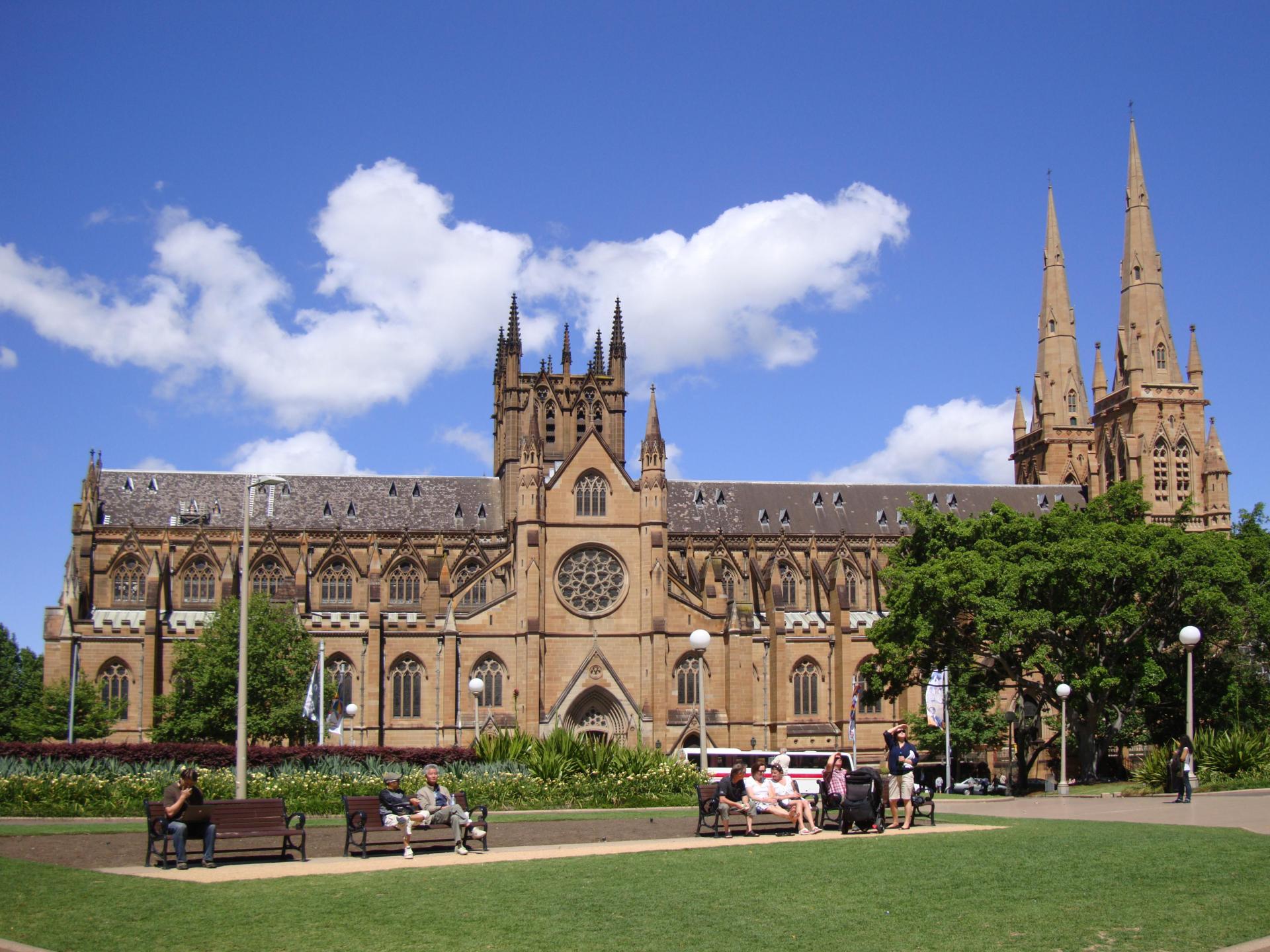 The Catholic Cathedral in Sydney, Australia, where the convict Salvatore Diacono is recorded in 1821.

Only a year later, the governor had to decide the fate of three criminals condemned to death for an act of piracy committed outside the mouth of the Grand Harbour.

With “sincere sorrow… unable to refrain from giving a severe but most necessary example”, he had not interfered in the execution of Giovanni Grech. But he had exercised “Royal Clemency” (capital letters) in favour of Giovanni Scicluna and Antonio Darmanin, commuting their sentence to perpetual exile under the condition they would be executed should they ever return to Malta. 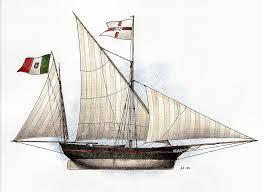 A fishing vessel known as a 'bovo', pirated at the mouth of Grand Harbour.

The Government Gazette proves lavish with details about this piracy. The bovo (masted fishing boat) San Calcedonio had just left Grand Harbour, when it was attacked by a Maltese dgħajsa tal-pass rowed by armed, masked and turbaned men who spoke Maltese. They smashed open the safe and took a considerable sum of silver coins, then hacked the ropes and threw the sails overboard.

The government offered a handsome reward for information that would lead to the identification and arrest of the pirates. Eventually, money talked and the police arrested them a year later. The court condemned the three to death by public hanging on the Floriana glacis on October 10. The boia had already disposed of the first pirate, when, quite theatrically, the Provost Marshall arrived on the scene with Maitland’s reprieve of the other two. 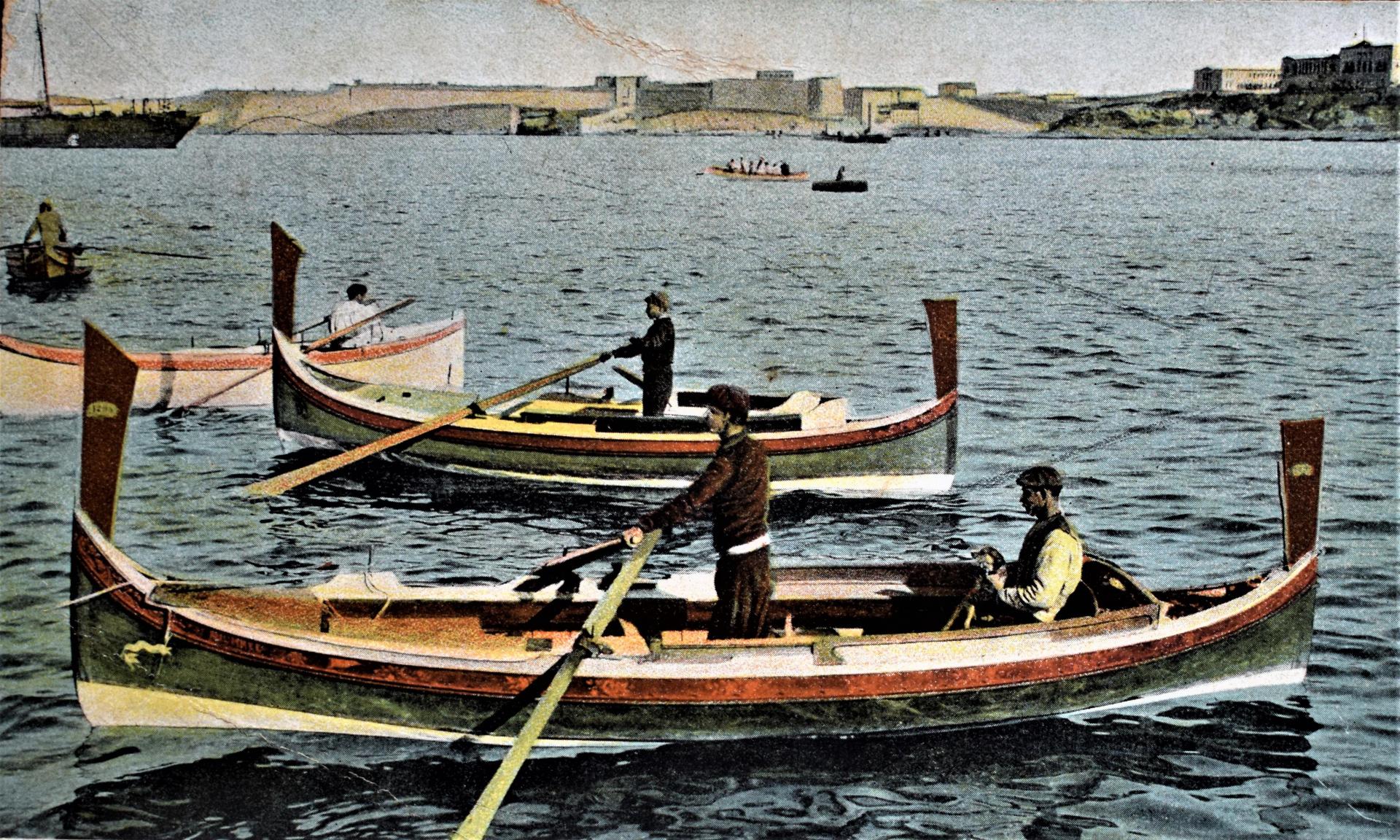 King Tom decreed a veritable mass exodus from prison on the occasion of the setting up of the Order of St Michael and St George for Malta and the Ionian Islands, in December 1818. A large part of the spectrum of the criminal code found itself honourably represented on that list.

Not one single woman features in this list of reprieved wrongdoers. Why?

Twenty-six convicted criminals were set free at one go, courtesy of St Michael and St George. 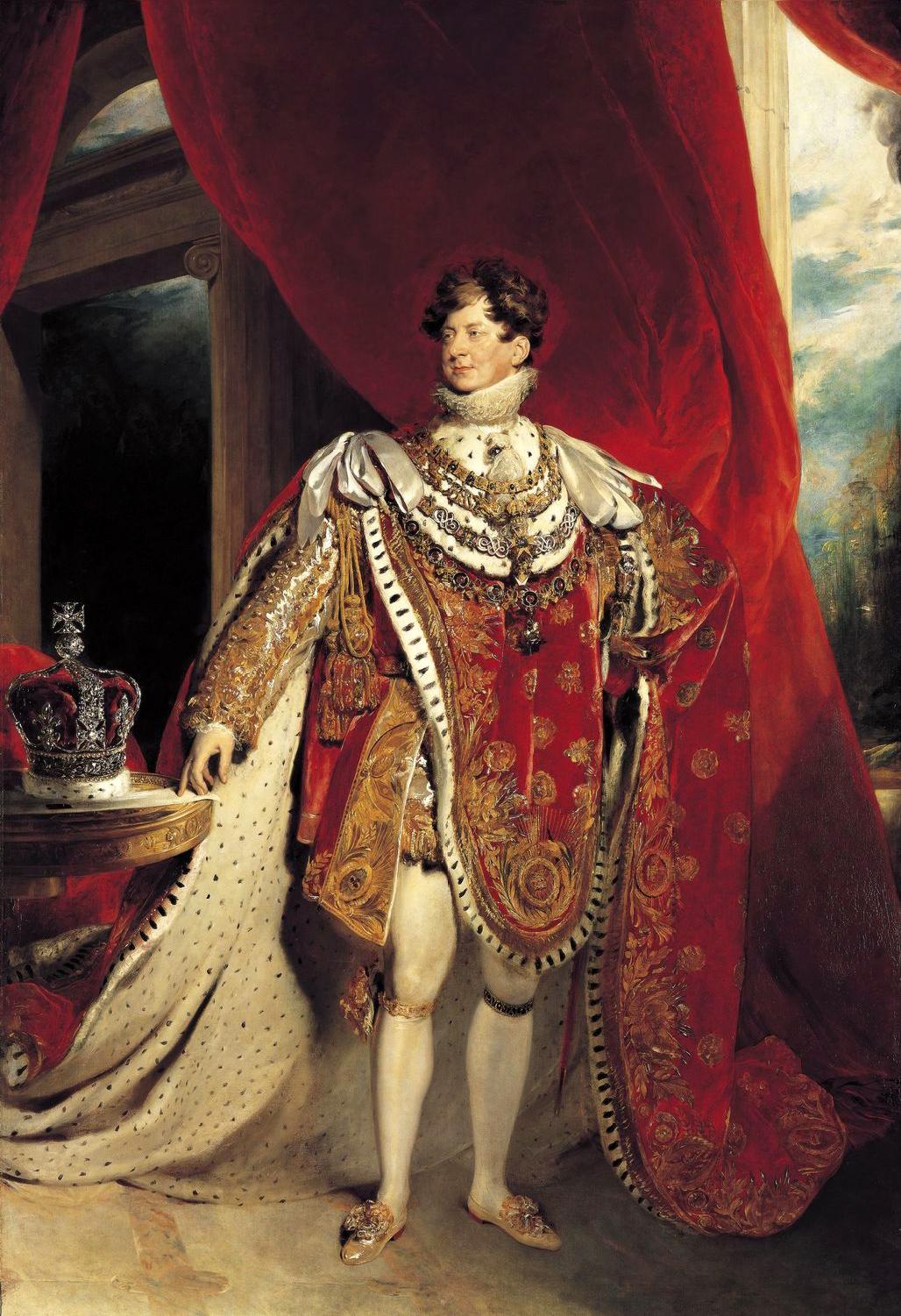 King George IV, in whose honour the last pardon covered in this feature was granted.

The very last executive act of clemency I have found before 1830 does not feature Maitland but Lieutenant Governor Sir Richard Plasket. Again, to ensure the happiness of the few and the resentment of the many, the colonial authorities decided to celebrate the birthday of King George IV by setting free a sizeable number of convicted prisoners.

The sovereign’s clemency gifted a considerable number of criminals with their lives or freedom. Note that not one single woman features in this list of reprieved wrongdoers. Why?