Andrea Pirlo, the guiding force in the Juventus revival over the last 18 months, said sorry after faltering when it mattered most in the 2-0 defeat at Bayern Munich last night. 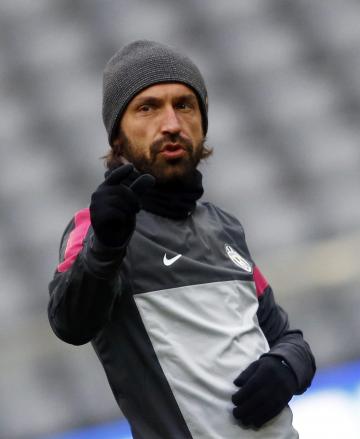 Pirlo gave the ball away to Bastian Schweinsteiger as he tried to play his way out of defence inside the first 30 seconds of their Champions League quarter-final first leg and Austrian youngster David Alaba fired home.

Pirlo, the deep-lying playmaker who usually sprays passes effortlessly around the pitch and seems almost impossible to dispossess, was a shadow of his normal self.

The 33-year-old, whose beard gives him a resemblance to actor Chuck Norris, was repeatedly outmuscled and gave arguably his shakiest performance in almost two seasons at Serie A champions and league leaders Juventus.

"I'm sorry I made so many mistakes but we still have a return match," the former AC Milan man told Italian media. "We will analyse this defeat and draw some conclusions.

"Bayern have shown today that they are a stronger team than us."

Bayern never let Italy World Cup winner Pirlo settle even after Toni Kroos, the player originally designated to mark him, was taken off injured in the 16th minute.

Pirlo nearly set up a second goal for Bayern with a poor pass which resulted in Andrea Barzagli being dispossessed and the ball finding its way to the dangerous Franck Ribery.

"We made our game prevail as planned and we took Pirlo out of the game, we succeeded in doing that," said Bayern coach Jupp Heynckes. "I must pay my team a big compliment for that."

Juve goalkeeper Gianluigi Buffon, equally as experienced as Pirlo, was caught off guard with the slightly deflected opener and might have done better with Bayern's second goal.

He parried Luiz Gustavo's shot to the feet of Mario Mandzukic, who laid the ball on a plate for Thomas Mueller to tap in after 63 minutes.

Buffon said the result was a reflection of Bayern's strength.

"The credit goes to our opponents who were better than us and rightly won," he said. "Tonight there's nothing to complain about. They deserved the win."

He blamed the first goal on the deflection off Arturo Vidal.

"When Alaba shot, I was moving to the right but the ball was touched by one of our players and took me off balance," he said.

The second leg takes place in Turin next Wednesday.