Malta's new attorney general has refused to release a copy of an inquiry into whether the former prime minister's chief of staff, Keith Schembri, took a €100,000 kickback on passport sales.

The inquiry was based on a leaked FIAU report that raised suspicions about two €50,000 transactions that passed between the pair via Pilatus Bank.

But in one of her first decisions since taking up office last week, Attorney General Victoria Buttigieg ruled out releasing any copies "at this stage".

Lawyer and PN MP Jason Azzopardi published a letter from Buttigieg, in which she confirmed that the inquiry had concluded into the alleged kickback on passport sales from auditor Brian Tonna has been concluded.

"The procès-verbal has been examined and in the circumstances no copies of the procès-verbal are going to be released at this stage", she said in the letter to Azzopardi. 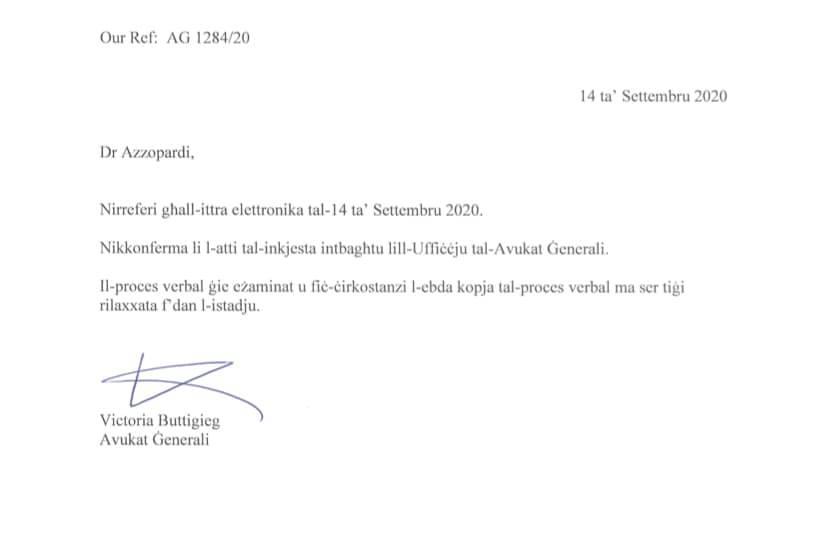 Attorney General Victoria Buttigieg denies publication of the inquiry into a €100,000 payment to Keith Schembri.

Busuttil said the decision to withhold publication was "completely unacceptable" and that the matter was of significant public interest.

"We have already waited for three and a half years. We should not be made to wait longer," he said.

"The Attorney General should understand that her duty is not to protect corrupt crooks but to protect the citizens."

He said Buttigieg had failed her very first test.

The Attorney General’s decision contrasts with one taken by her predecessor Peter Grech, who handed over a copy of the entire 2018 Egrant inquiry to former Prime Minister Joseph Muscat within a day of it being sent to his office.

The inquiry was based on a leaked FIAU report that raised suspicions about two €50,000 transactions that passed between the pair via Pilatus Bank. The outcome of the inquiry is not yet known.

Schembri has claimed that the €100,000 payment, which originated from a company in the British Virgin Islands used by Tonna for passport sales, was a loan repayment.

No trace of the original loan payment by Schembri to Tonna was ever found by the FIAU.

Philip Mercieca, a former Pilatus Bank director, had told the Egrant inquiry that the bank was “crazy” to have allowed the transactions between Schembri and Tonna to take place.

Schembri is also facing a separate inquiry into suspicions he filtered over €650,000 to former Allied Newspapers managing director Adrian Hillman in over 30 “suspicious transactions” between 2011 and 2015.