The Prime Minister’s right-hand man, Keith Schembri, has played down links with a new business venture that stands to gain from a new government push towards plastic bottle recycling.

Prime Minister Joseph Muscat announced last year that by 2019, Malta would aim to collect more than 70 per cent of the plastic bottles it put on the market.

The government would aim to encourage plastic bottle recycling through the introduction of reverse vending machines at shops and petrol stations.

The Malta Independent on Sunday reported that Mr Schembri’s business partner, Malcolm Scerri, was the official representative in Malta of Tomra.

Replying to questions by this paper, a spokesman for the Prime Minister’s Office said Mr Schembri had nothing to do directly or indirectly with Tomra or with any other company that could supply reverse recycling vending machines. Any suggestions to that effect were false and malicious, he insisted.

Tomra is officially represented in Malta by a company set up in 2014, Acumen Projects, of which Mr Scerri is director.

Until last month, Acumen ’s registered address was at Nexia BT’s San Ġwann offices. Its shares are wholly owned by Thoughtzone, whose shares are owned by Mr Scerri. 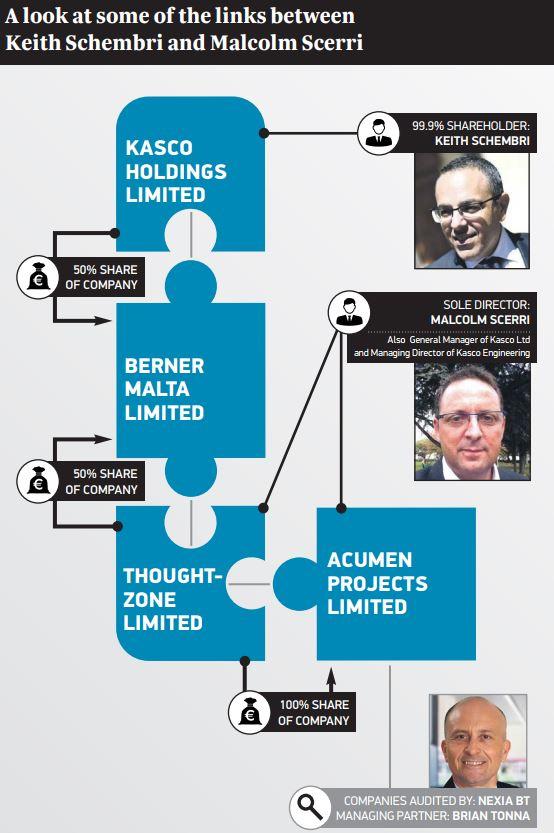 Thoughtzone, in turn, owns 50 per cent of the shares in Berner Malta, while the other 50 per cent is owned by Mr Schembri’s Kasco Holdings. Berner is a supplier of industrial tools and consumables.

All three companies are audited by Nexia BT.

This paper has reported that Mr Schembri financially benefited from a number of government contracts post-2013.

Information furnished after a request from the Times of Malta under the Freedom of Information Act showed that Kasco won six tenders, worth €193,905, to supply paper to the government printing press between 2013 and March 2015. The press falls under the direct control of the Prime Minister’s Office.

The company also won an €85,000 tender to supply Enemalta with photocopy paper.

Mr Schembri’s business interests also stand to benefit from the decision by Crane Co. to open a money-printing facility in Malta.

As local agents for the money-printing machines bought by Crane, his company is set to make thousands of euros off servicing agreements with the US firm.