A man allegedly beat a kitten to death outside a popular seaside restaurant on Sunday afternoon, horrifying patrons and prompting an outpouring of anger on social media. 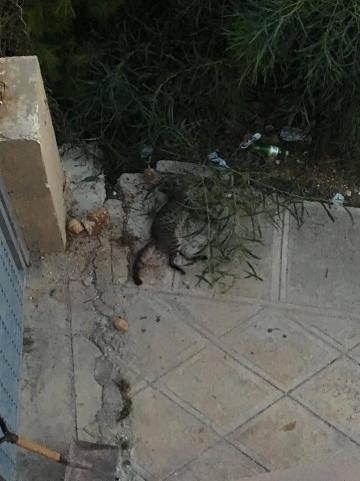 A dead cat can be seen in this photo an alleged eyewitness posted to Facebook. Photo: Facebook

The act of animal cruelty took place just outside Golden Bay establishment The Apple'e Eye, eyewitnesses claimed, when an unidentified man chased a stray cat out of the restaurant and then "struck the cat repeatedly and killed it", as tourists sitting at nearby tables screamed.

Police confirmed that the restaurant owners had filed a report about the incident on Monday morning.

The initial Facebook post about the incident had implied that the restaurant owner's elderly mother was in some way connected to the man who allegedly killed the kitten - and that detail was seized upon by many other Facebook users, who directed invective at The Apple's Eye and its owners.

That anger was however misplaced, the restaurant owners said on Monday afternoon. In a Facebook post, The Apple’s Eye completely disassociated itself from the alleged perpetrator, expressed its “disgust” at the incident and said it hoped the man would be brought to justice.

“The Apple’s Eye is a pet-friendly restaurant,” owners wrote. “The business owner’s first job every morning is to feed the numerous stray cats surrounding our premises. Unfortunately this incident has overshadowed all the good work we do with animals including our own.”

According to local laws, acts of animal cruelty are punishable by up to three months in jail and fines ranging from €1,000 to €55,000.

The Nationalist Party condemned the killing of the kitten and called for an investigation and court action. It also welcomed progress in investigations into whoever shot three storks last week.

Have more details about the incident? Send an email on mynews@timesofmalta.com