Seven knights, seven dames and three priests were invested during a ceremony by the Knights of the Order of the Holy Sepulchre of Jerusalem at St John’s Co-Cathedral in Valletta last Saturday.

The ceremony was celebrated by Cardinal Grand Master Fernando Filoni in the presence of the Order’s Grand Prior, Mgr Charles Scicluna, Apostolic Nuncio Mgr Alessandro D’Errico, the Lieutenant for Malta Roberto Buontempo and Governor General Leonardo Visconti di Modrone and the lieutenants of Central Apennine Italy, Sardinia and Sweden-Denmark, as well as the Ambassador of Italy to Malta, Fabrizio Romano. 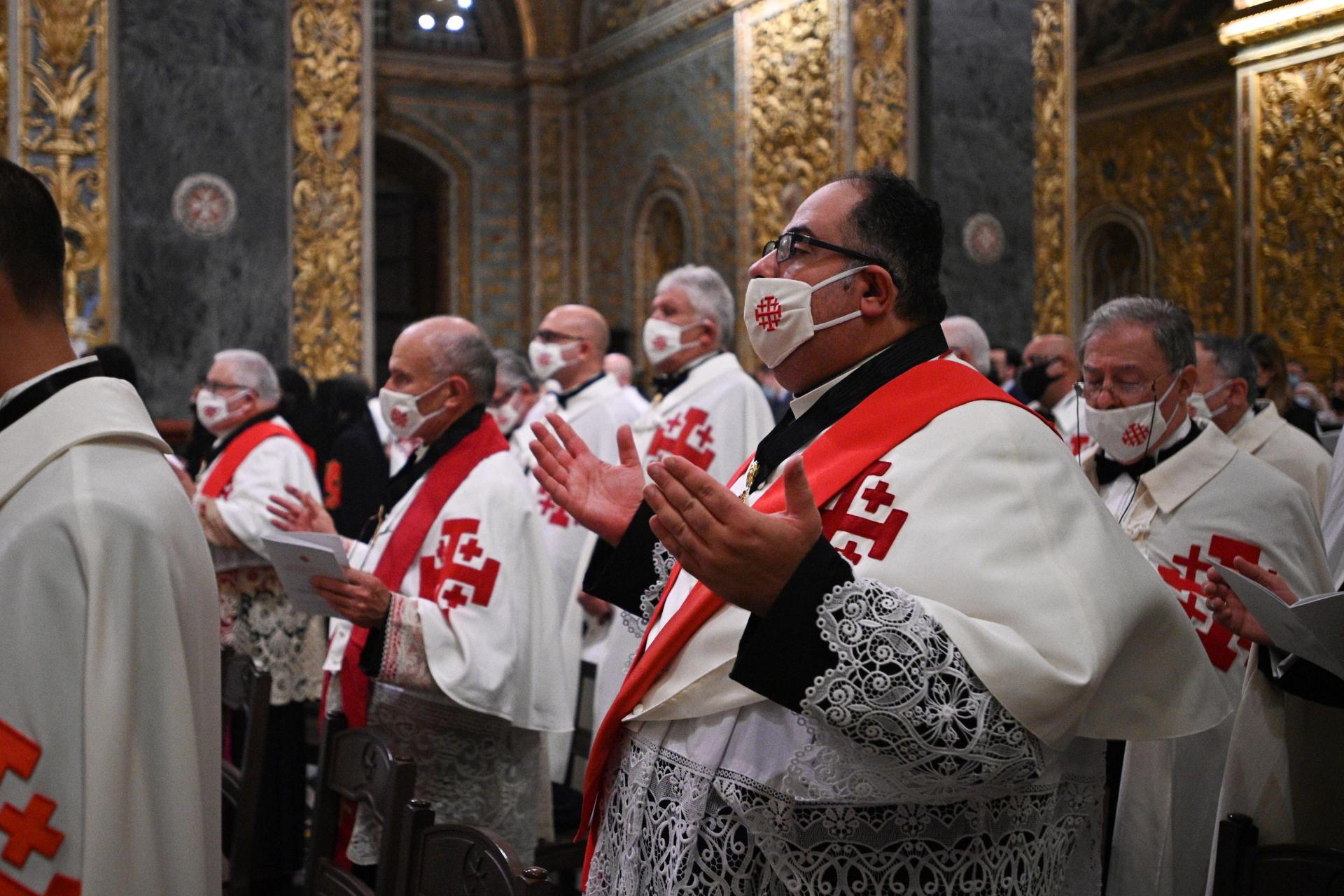 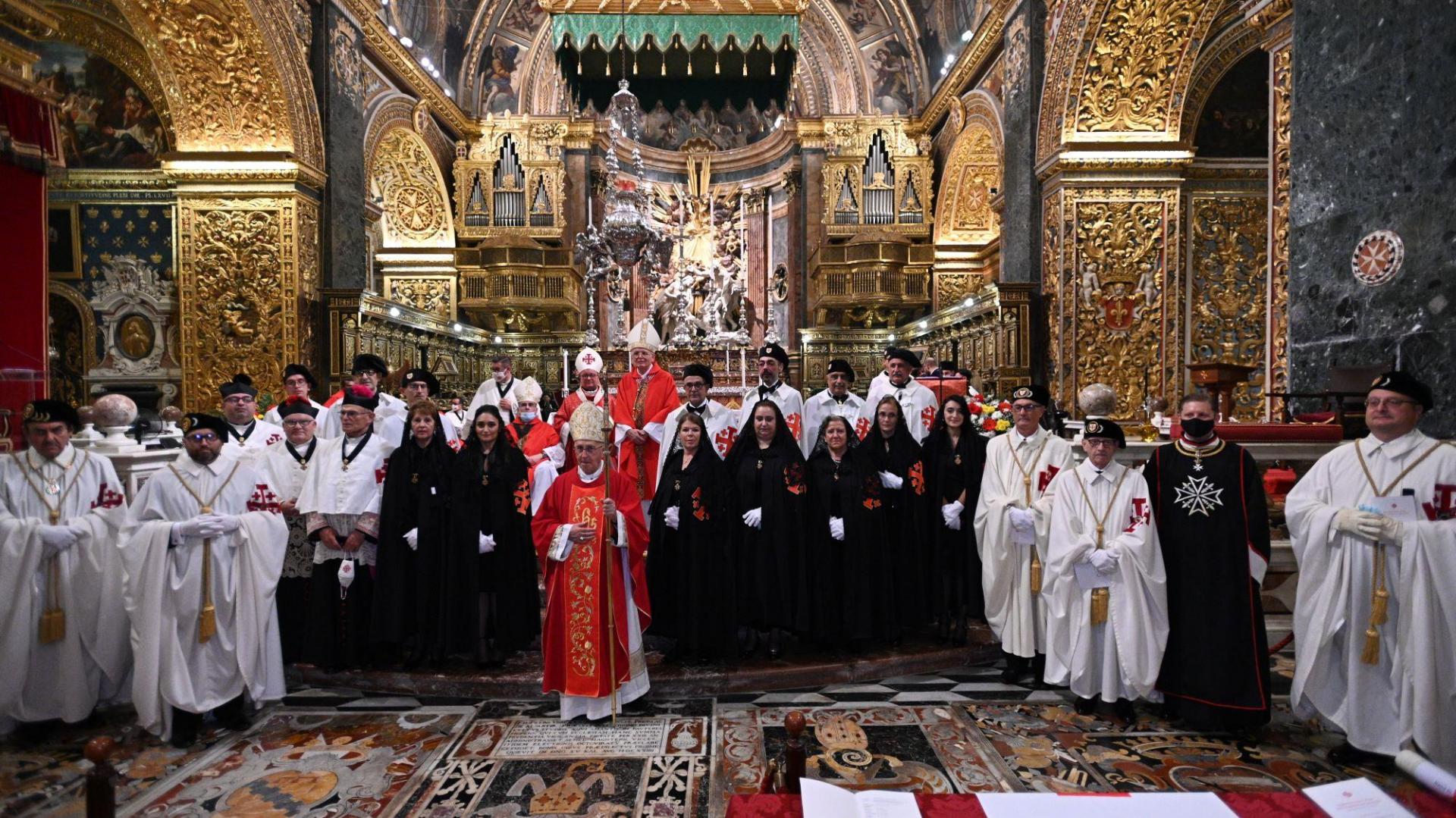 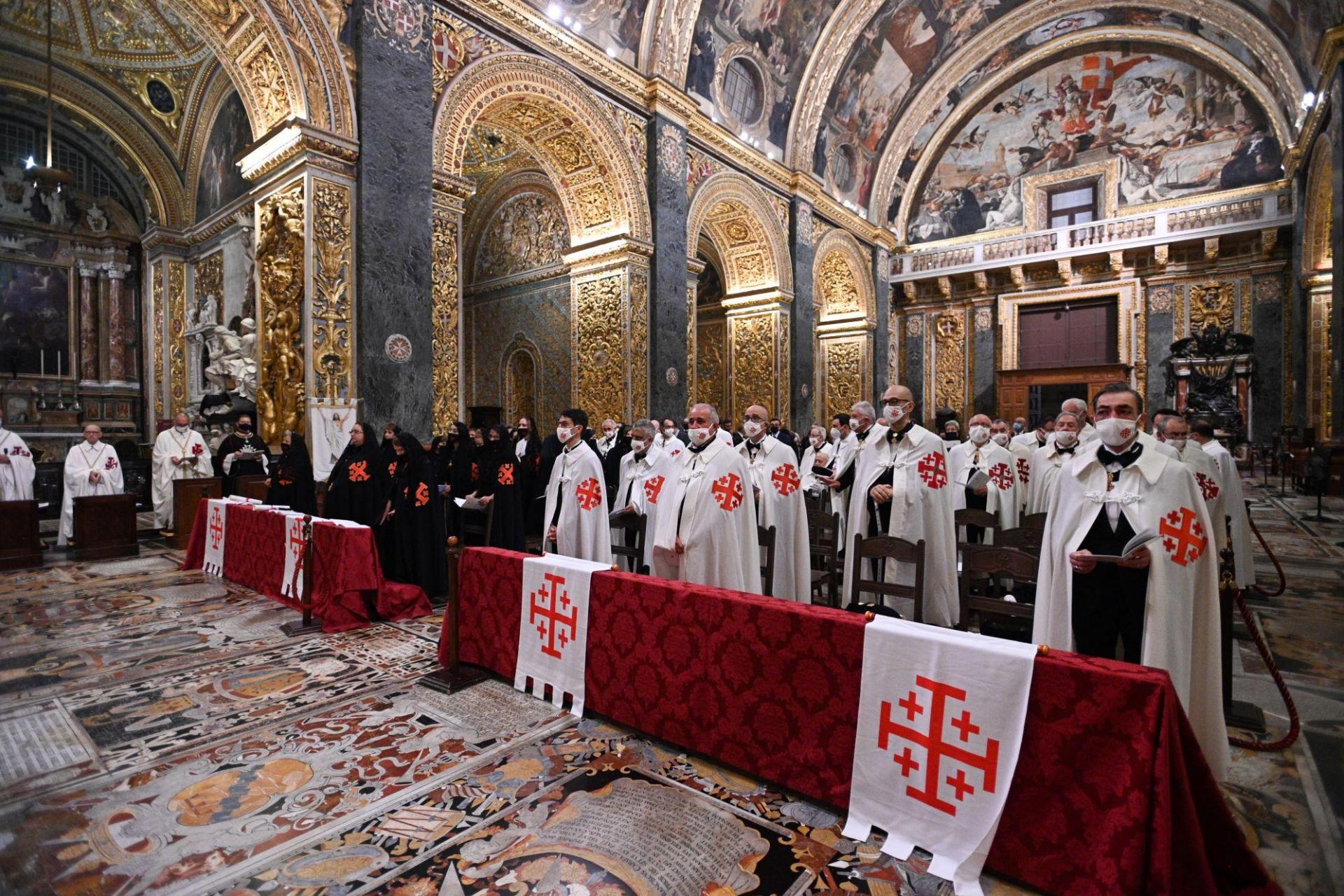 The members of the EOHSJ Malta during the investiture ceremony. Photo: Ian Noel Pace

The ceremony was also attended by Daniel de Petri Testaferrata, president of the Maltese Association of the Sovereign Military and Hospitaller Order of St John of Jerusalem, of Rhodes and of Malta.

Prior to the ceremony, on November 4, Mgr Scicluna visited Santa Maria Ta’ Doni church, in Rabat, to bless a commemorative plaque on the 25th anniversary of the establishment of the Equestrian Order of the Holy Sepulchre of Jerusalem in Malta. The church was transferred to the Maltese Lieutenancy in 2020.

A Vigil of Arms was held at the basilica of the Nativity of Mary, in Senglea, on November 5.

The Order in Malta

Many historians trace the Order’s origins to the First Crusade and the conquest of Jerusalem by Geoffrey de Bouillon in the year 1099.

It has been present in Malta since the mid-19th century but it was not constituted as an official body until a few decades ago.

In 1994, Chev. Louis Gera Lauron dei Marchesi Testaferrata, a member of the Order, embarked on a project to set up an official jurisdiction of the Order. With the assistance of the late Victor Licari, he embarked on this project which came to fruition through the intervention of Mgr Emmanuel Gerada, titular Archbishop of Nomentum and Apostolic Nuncio to Ireland who retired and settled in Malta in 1995. The lieutenancies of Ireland and Scotland contributed to the birth of the Maltese jurisdiction. 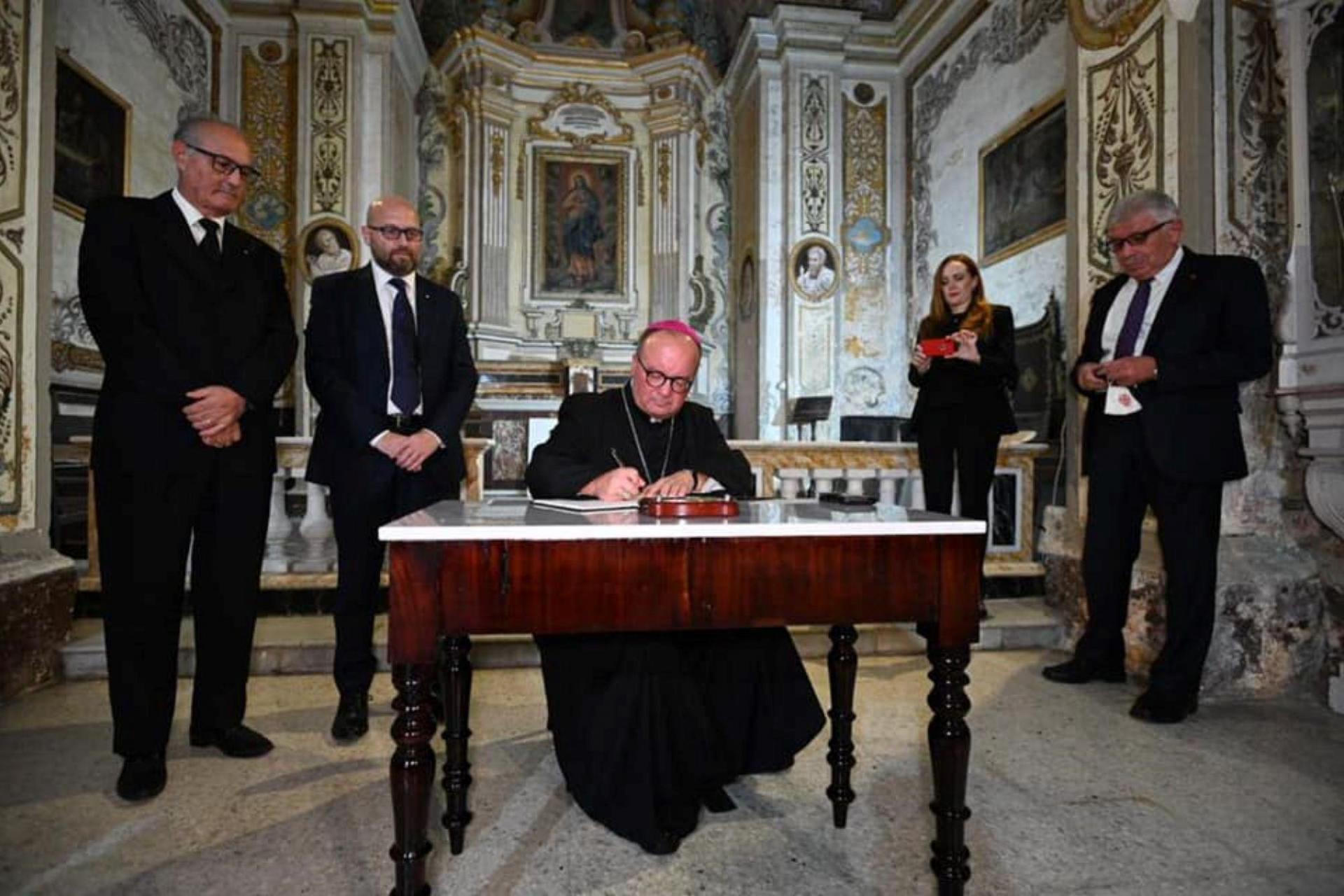 Grand Prior Mgr Charles Scicluna visited Santa Maria ta’ Doni Church in Rabat to bless a commemorative plaque on the 25th anniversary of the establishment of the Equestrian Order of the Holy Sepulchre of Jerusalem in Malta, on November 4. Photo: Oliver Pace 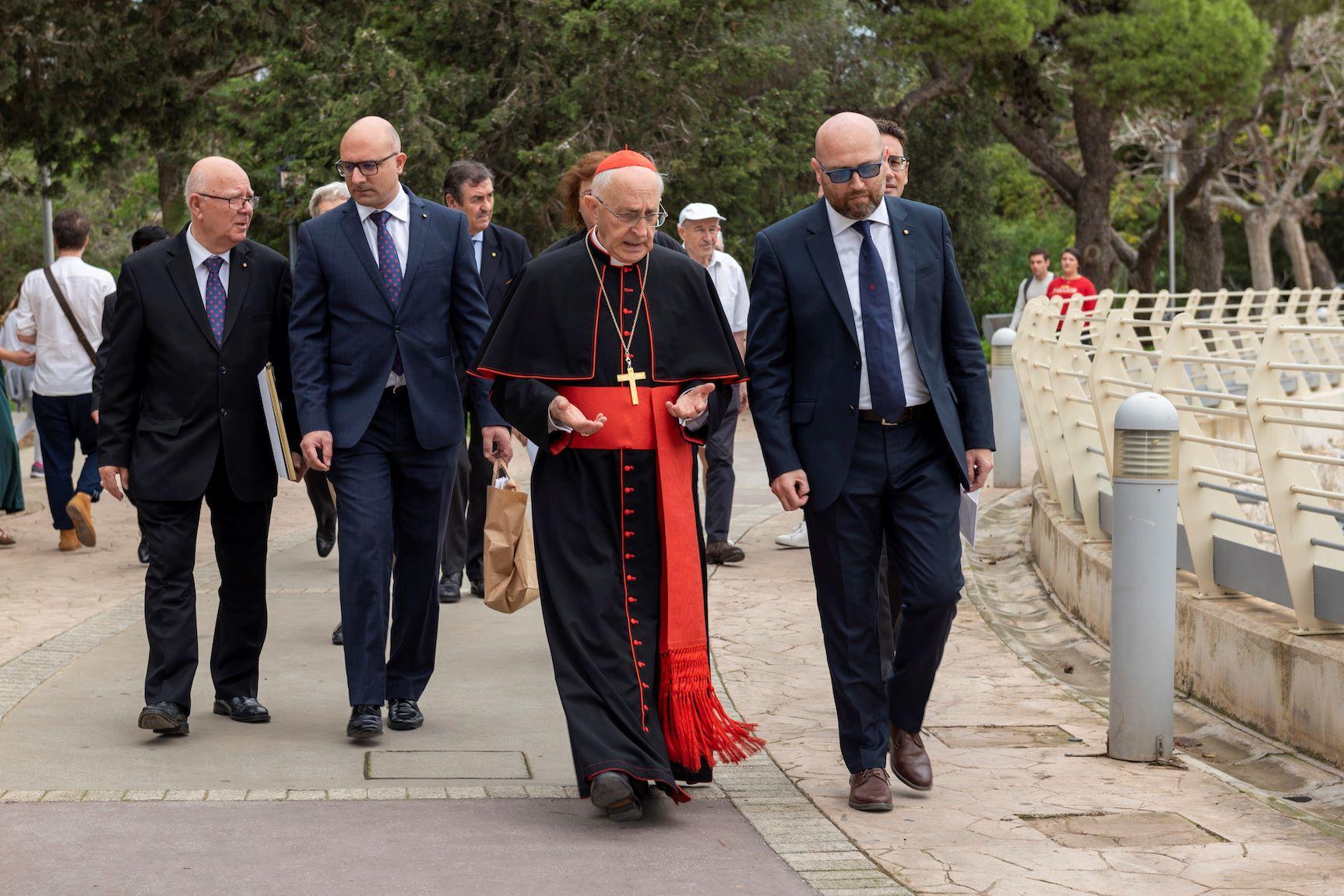 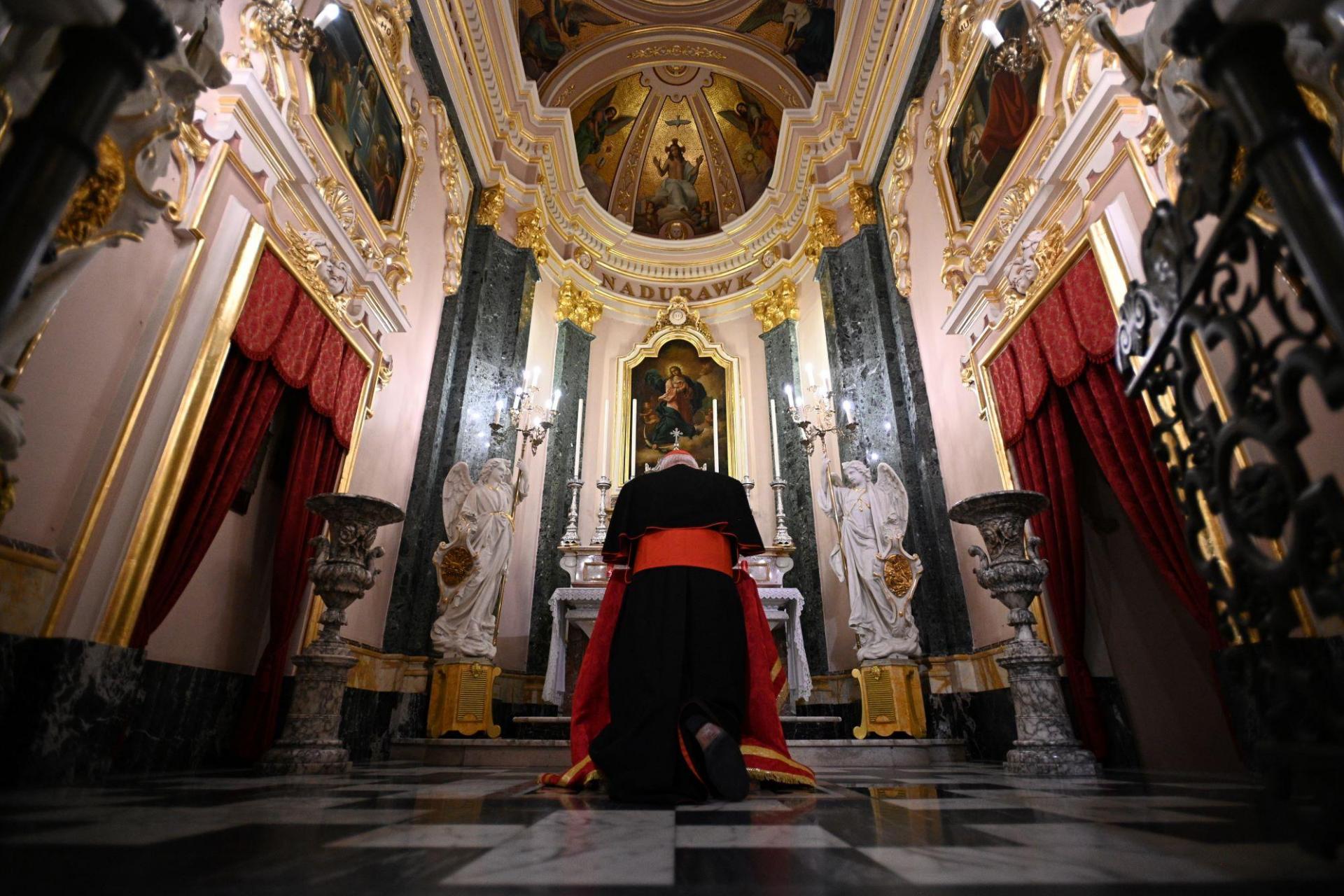 Cardinal Fernando Filoni praying inside the Chapel of the Holy Sacrament before the Vigil of Arms at the Basilica of the Nativity of Mary in Senglea on November 5. Photo: Ian Noel Pace

In January 2019, Knight Grand Officer Roberto Buontempo was appointed. In the year 2020, Mgr Scicluna, Archbishop of Malta and Grand Prior of the Order, granted the Maltese lieutenancy the use of the church of Santa Maria ta’ Doni in Rabat as its ecclesiastical seat.

Purposes of the Order

The purposes of the Order are multifold. It aims to strengthen in its members the practice of Christian life, in absolute fidelity to the Supreme Pontiff and according to the teachings of the Church, observing as its foundation the principles of charity which make the Order a fundamental means of assistance to the Holy Land.

It also works to sustain and aid the charitable, cultural and social works and institutions of the Catholic Church in the Holy Land, particularly those of and in the Latin Patriarchate of Jerusalem, with which the Order maintains traditional ties.

Another one of its missions is to support the preservation and propagation of the faith in those lands, and promote interest in this work not only among Catholics scattered throughout the world, who are united in charity by the symbol of the Order, but also among all other Christians. 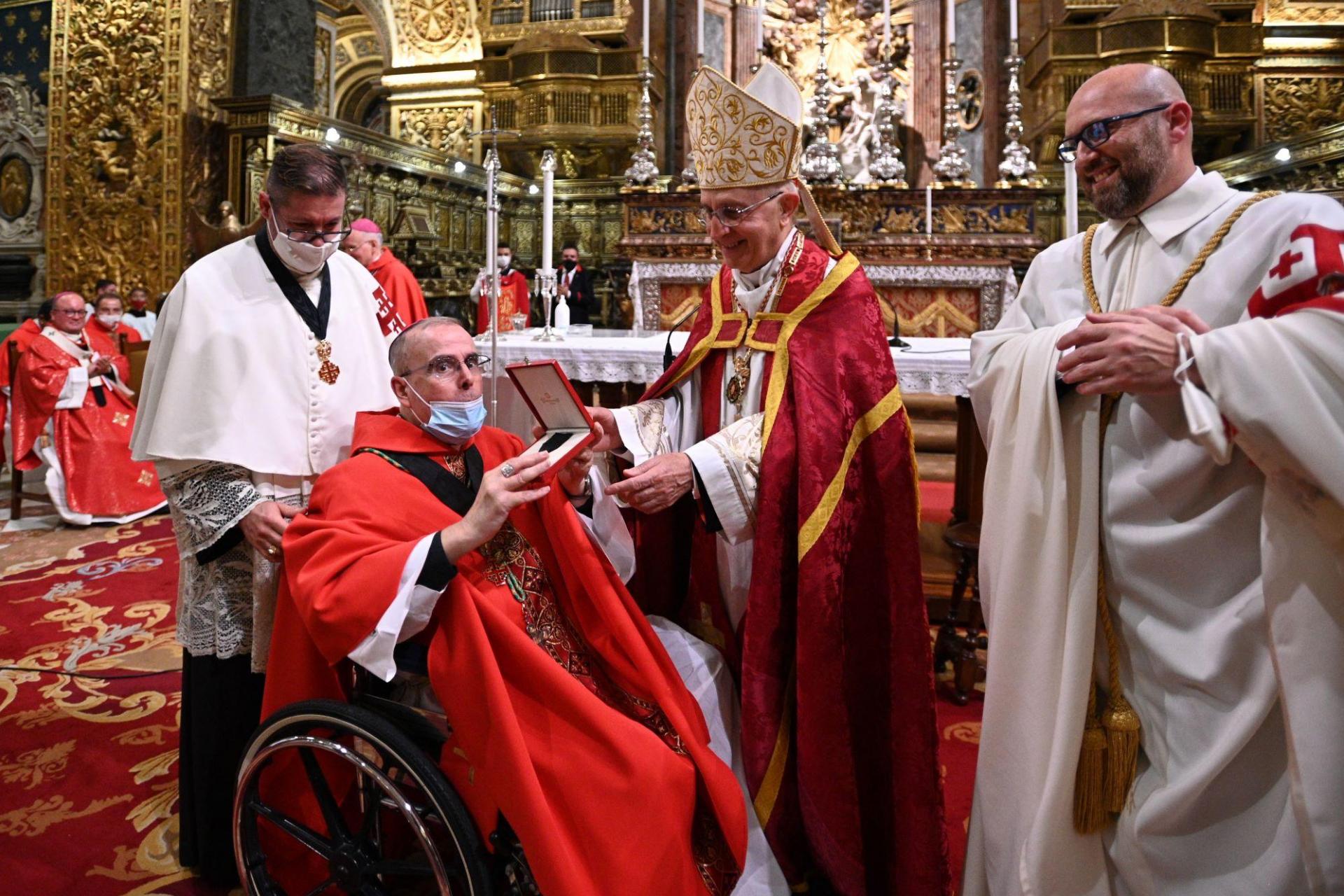 During the investiture, a special award was conferred to Mgr Paul Cremona, OP, Archbishop Emeritus of Malta. He was bestowed with the Gold Palm of Jerusalem.. Photo: Ian Noel Pace

Joining the Order means making a lifetime commitment to witness to the faith, practise Christian life and carry forward charitable works for the moral and material support of the Christian communities of the Holy Land, always acting with that discretion which distinguishes Christian charitable efforts.

The purpose of joining the Order is to serve the Catholic Church and promote initiatives to preserve the Christian presence in the Holy Land in a dynamic of dialogue and peace with followers of other religious traditions. The purpose of joining the Order is not to become a member of a prestigious organisation in order to boast of one’s status or acquire personal benefits and advantages.

Usually, though not always, a candidate is presented by an existing member of the Order. In Malta, an admissions commission appointed by the Lieutenant assesses the candidate at an initial interview. If his/her attributes are generally considered to meet requirements, the candidate can begin a period of formation of no less than 12 months. This includes attending a number of formation lectures, after which the Lieutenant writes to Rome, with the Grand Prior’s endorsement, recommending the individual to be admitted.

In Rome, another commission studies the dossier and if it is approved, the file goes to the Cardinal Grand Master. The last step is the issuing of a diploma from the secretariat of the Vatican state.