The Sovereign Military Order of Malta is planning to set up a centre where migrants can be taught a variety of trades so they can find jobs, get on with their lives and regain their dignity.

The Order’s Ambassador to Malta, Prince Augusto Ruffo Di Calabria, said the initiative was just one of many short-term projects being planned in line with the Order’s Christian principles of assisting those most in need.

“We are keen to set up a place where migrants could learn. A sort of centre to teach them how to work so they can be free to find a job and make their own living or else go back to their country with something more in their hands. It is our moral responsibility,” he said.

“They need to work and be able to make a living. We are here to help give them a future, give them hope and help them find a job, even for their own dignity.”

The Knights of Malta are devoted to their humanitarian mission to help those in need, as inspired by their core values of humility, respect and generosity.

“What we do today is nothing when compared to what the Knights of Malta did in the past.

“The Knights of Malta we see in history books did not disappear. We are not fighting battles as they did in the past but we are fighting the modern battles of poverty and solitude,” the ambassador added.

The care provided by the Order ranges from assisting the poor to running hospitals, helping refugees and migrants to helping children in their daily needs.

Founded in Jerusalem in the 11th century, the Order of Malta had a long history of service to the vulnerable and the sick.

A lay religious order of the Catholic Church, the Sovereign Order of Malta enjoyed diplomatic relations with over 100 states and was active in 126 countries caring for people in need through its medical, social and humanitarian work. It had a broad spectrum of social projects providing support for forgotten or excluded members of society.

The Order, which has 20,000 knights spread across the world, is recognised by the Vatican and has its main seat in Rome and Malta, where there are 110 knights.

Prince Ruffo Di Calabria said the Order spent about €300 million a year in projects around the world. The money came from donations received from members who paid annual fees that went entirely towards humanitarian projects.

In Kenya, for example, the Order paid for the drilling of a borehole to provide potable water for villagers who previously had to walk almost 26 kilometres to bring water to their families.

In Italy, the Order manages a 240-bed San Giovanni Battista Hospital, in Rome which has a specialist neuro-rehabilitation unit for cerebral trauma patients and a specialised ‘reawakening unit’ for patients recovering from coma.

It employs more than 550 professionals and runs 13 health centres across Italy.

The various branches of the Order of Malta around the world focus mainly on care for the sick and the elderly, on homelessness and support for the lonely.

The ambassador said the Order was particularly concerned about the confusion created by the various “fake orders” set up around the world, including in Malta.

“Malta recognises only one Order and that is the Sovereign Order of Malta,” he said.

“There are several other orders that use our exact name and most of the time even our eight-pointed cross with very little variation and this creates lots of confusion.

“The other orders collect money too but they are not as transparent as us on how they spend the funds and which projects they undertake. People must be careful which orders they choose to join.” 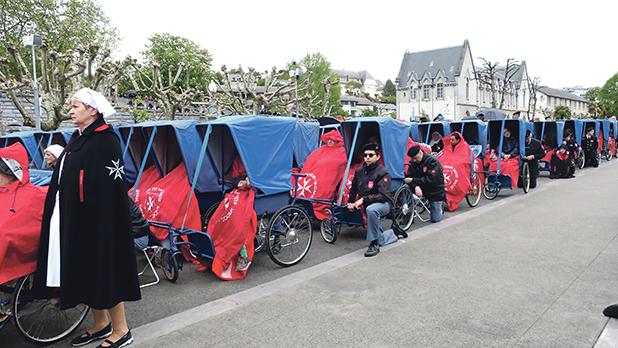 The various branches of the Order of Malta around the world focus mainly on care for the sick and the elderly.

The Order’s Ambassador to Malta, Prince Augusto Ruffo Di Calabria, and his spouse, Princess Tana Ruffo di Calabria, will be hosting a concert to celebrate the feast of St John the Baptist, the patron saint of the Order of Malta.

The concert will be held on Sunday at 6.30pm at the Republic Hall of the Medi-terranean Conference Centre, in Valletta.

A string quartet – Francesco Manara, Massimo Polidori, Daniele Pascoletti and Simonide Braconi – will be performing together with pianist Gile Bae, from the orchestra of Teatro Alla Scala di Milano.