The highly controversial minister Konrad Mizzi is actively considering a party leadership bid, The Sunday Times of Malta has learnt.

Cabinet ministers and Labour Party delegates confirmed that Dr Mizzi, a former deputy leader, had made contact with them to ask for their support should he decide join the contest for control of the Labour Party.

A few party heavyweights have already indicated they would in fact support a potential bid by Dr Mizzi, sources said. However, none of them are believed to form part of the Cabinet of Ministers but are among the 750 party delegates who vote in leadership elections.

Contacted on Saturday, Dr Mizzi declined to comment on the matter. Instead he said he was “fully behind Joseph Muscat’s leadership, his direction and vision”.

“I am and will continue working on an active campaign to convince Joseph Muscat to stay on. I have no doubt this campaign will gain momentum,” he told The Sunday Times of Malta.

The Tourism Minister was a star member of the 2013 Cabinet but his name soon became synonymous with alleged corruption following the 2016 Panama Papers scandal which exposed how he had set up secret offshore financial structures while he was tasked with negotiating major government contracts.

Although he has repeatedly protested his innocence, Dr Mizzi has faced relentless pressure to resign, even after being re-elected to Parliament in the 2017 general election.

In the wake of the Panama Papers scandal, the Prime Minister had refused to sack him but in a 2017 Cabinet reshuffle removed him as energy minister and made him minister without portfolio. Dr Mizzi also stepped down as deputy leader of the PL. He has since been given the tourism portfolio.

Meanwhile, party insiders said Dr Mizzi had recently been involved in a heated meeting with Prime Minister Joseph Muscat during which the Tourism Minister was urged not to contest any future leadership positions. 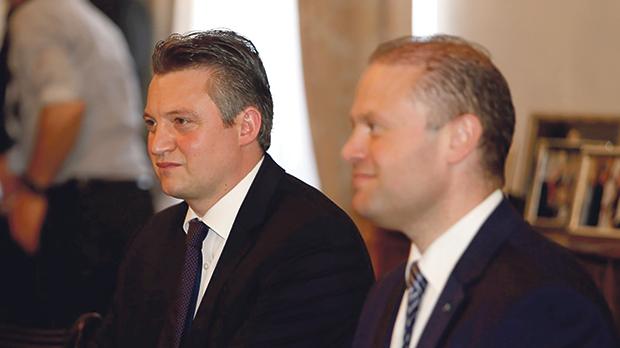 The sources said the conversation, described by one as an “argument”, ended in Dr Muscat instructing Dr Mizzi not to run.

“It surprised us when we heard that Konrad [Mizzi] was making calls despite being told not to,” one veteran party source said.  His chances of actually winning a party election were described by Labour veterans as “beyond slim”.

.@TheTimesofMalta published fake story about a "meeting" with the PM, which never took place. Four-square behind @JosephMuscat_JM; mutual respect.

In a tweet on Sunday, Dr Mizzi denied there had been a meeting between him and Dr Muscat.

The issue of who will take over from Dr Muscat at the helm of the party first cropped up in 2017, when Labour was gearing up for an election in the hopes of securing a second term in office.

He had taken party supporters by surprise when he said he would not lead the party into a third general election, perhaps inadvertently firing the starting pistol on a hushed leadership tussle in the PL’s ranks.

While the Prime Minister has so far kept his cards close to his chest on what will come next, there is a growing sense in the party that 2019 could be a year of change.

Last week Dr Muscat confirmed what had long been an open secret in Maltese politics – that he harbours ambitions of snatching up a top post in the highest structures of the European Union.

While he himself has described this as a “long shot”, party sources indicated that he has two posts in his sights: European Council President, which is currently occupied by Donald Tusk, and the EU’s top diplomatic position of High Representative, a position occupied by Italian Federica Mogherini.

Both these positions will be vacant in the second half of this year.