Minister Konrad Mizzi took a secret trip to Dubai on the same day that his financial advisors Nexia BT were sent all the necessary documents for him to open an account for his Panama company there.

Leaked e-mails found in the Panama Papers show that Nexia BT asked Mossack Fonseca, the firm at the centre of the leak, to send all the necessary documents to open up bank accounts for Dr Mizzi and Keith Schembri’s Panama companies in Dubai.

“My client will get them [sic] directly to the bank in original,” read an e-mail by Nexia BT in reference to the documents needed to open a Dubai account.

The e-mail was sent two days before Dr Mizzi’s trip to Dubai, and the day of his departure was given by Nexia BT as the final deadline for all the documents to be received.

The significance of this e-mail was only fully understood after a two-month wait by The Sunday Times of Malta to obtain information about all of Dr Mizzi’s trips to Dubai since the March 2013 election. This newspaper had filed a freedom of information request.

The information, which was only handed over last week, shows that Dr Mizzi travelled to Dubai on August 27, 2015.

The government’s anti-money-laundering agency (FIAU) has since discovered that two Dubai-based companies, 17 Black and Mackbridge, were set up to send money to Dr Mizzi’s and Mr Schembri’s Panama companies.

The Malta Independent has reported that the FIAU found two attempts to transfer funds to 17 Black by Orion Engineering Group, which is a company linked to the floating storage unit providing LNG to the new gas-fired power station.

Dr Mizzi has specifically denied receiving any kickbacks through his Panama company, while Mr Schembri denied ever receiving kickbacks “while in government”. 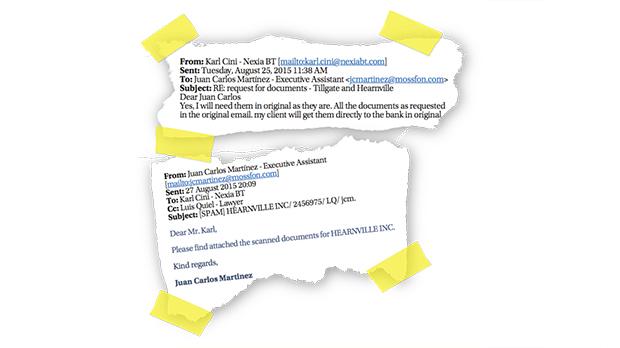 Extracts from e-mails from the Panama Papers showing how Nexia BT said their ‘client’ would take the document-ation necessary to open up an account ‘to the bank in original.’

During the two-day period prior to Dr Mizzi’s trip, Nexia BT’s e-mails to Mossack Fonseca requesting all the necessary Dubai account opening information increased in frequency.

The day before the trip, Mossack Fonseca told Nexia BT they would be sending all the documents via courier.

Nexia BT replied that the documents would not arrive in Malta on time and instead requested that Mossack Fonseca send scanned copies.

The scanned copies for Hearnville Inc., Dr Mizzi’s Panama company, were sent on the day of his departure to Dubai.  The leaked e-mails indicate Nexia BT were sent certificates of incorporation, memorandum and articles, share certificates, power of attorney documents, ultimate beneficial ownership details and passport copies of all shareholders and directors, as well as the authorised signatories’ CVs.

A press release from the De-partment of Information is normally issued during or after a minister’s trip abroad, detailing the purpose of the visit.

No such information was ever sent out about Dr Mizzi’s August 2015 Dubai visit.

In reply to questions from this paper, Dr Mizzi said he did not carry or present any documentation related to the opening of a bank account in Dubai, and nobody asked him or invited him to do so.

Dr Mizzi said the purpose of the trip was to attend meetings with operators in connection with a potential public-private partnership on the development of a special economic zone in Malta focused on attracting investment to the island.

No press release was ever issued about the trip, due to the “preliminary nature of these meetings”, Dr Mizzi said.

He reiterated that part of the service offered to him by Nexia BT was to make enquiries on the setting up of a bank account.

“However, no bank account was ever opened, the company never traded, no transactions were ever made, and the company has been closed,” Dr Mizzi said.

Dr Mizzi did not answer the question regarding why Nexia BT were gathering documents which they said would be presented in their original format to a Dubai bank by their client in person.

The subject line of the e-mail in question contains the names of Dr Mizzi’s and Mr Schembri’s Panama companies.

The questions this newspaper sent to Dr Mizzi are being reproduced here in full.

• According to information provided to us by your office through a freedom of information request, you took a trip to Dubai between 27 August and 1 September 2015.

• Can you please state the reason for this visit? Was it an official visit or a private one?

• Why were no press releases sent out by the DOI about the visit?

• According to e-mails in the Panama Papers, your financial advisers Nexia BT were gathering information re-quired for opening a bank account for your Panama company in Dubai shortly before your trip there.

• Did you take this documentation with you to Dubai? If not, why did Nexia BT need it so urgently prior to your visit?

• Did you open up, or attempt to open up a Dubai bank account during your visit there?

• If not, why were Nexia BT gathering documents which they said would be presented in original format to a Dubai bank by their client in person?