Next year from April 17 until May 11, the InClassica International Music Festival will take place in Valletta, featuring over three weeks of consecutive evening concerts at the Mediterranean Conference Centre and welcoming leading classical musicians from around the world. The project is organised by the European Foundation for Support of Culture (EUFSC) and the Malta Philharmonic Orchestra (MPO).

This upcoming edition of InClassica celebrates the festival’s 10th anniversary, in what promises to be its largest and most diverse iteration yet. The festival will feature performers from 23 countries and will include concerts from eight orchestras, 33 soloists and eight leading conductors.

Formerly known as the Malta International Music Festival, this year’s incarnation of the event has been officially rebranded to ‘InClassica’, reflecting the stellar cast of visiting artists, orchestras and conductors travelling to Malta to perform at the Festival. The inspiration for the rebranding is that of a ‘musical observatory’: a place to watch the stars as they move across the night sky – in the case of InClassica, watching and listening to stars from the world of classical music as the Festival travels through its eclectic three-week programme of concerts.

InClassica 2021 offers music lovers a rare opportunity to experience performances by some of the most respected names in classical music from across the globe, all under one roof. The Royal Philharmonic Orchestra (UK), Jerusalem Symphony Orchestra (Israel), Orchestre Philharmonique Royal de Liège (Belgium), Armenian State Symphony Orchestra, Russian National Orchestra and State Philharmonic Orchestra of Rhineland-Palatinate (Germany) will join the Malta Philharmonic Orchestra and Malta Youth Orchestra in a series of concerts presenting a diverse range of works spanning baroque to contemporary classical music. Additionally, next year’s Festival marks several anniversaries celebrating the birth dates of prominent composers, including Prokofiev (130 years), Bartók (140 years), Dvořák (180 years) and Beethoven, whose 250th anniversary, although falling this year, has been pushed back globally to 2021 owing to COVID-19 pandemic restrictions hampering live performances around the world. InClassica will present performances of works by each of these composers throughout its extensive programme of events.

Soloists for InClassica include: 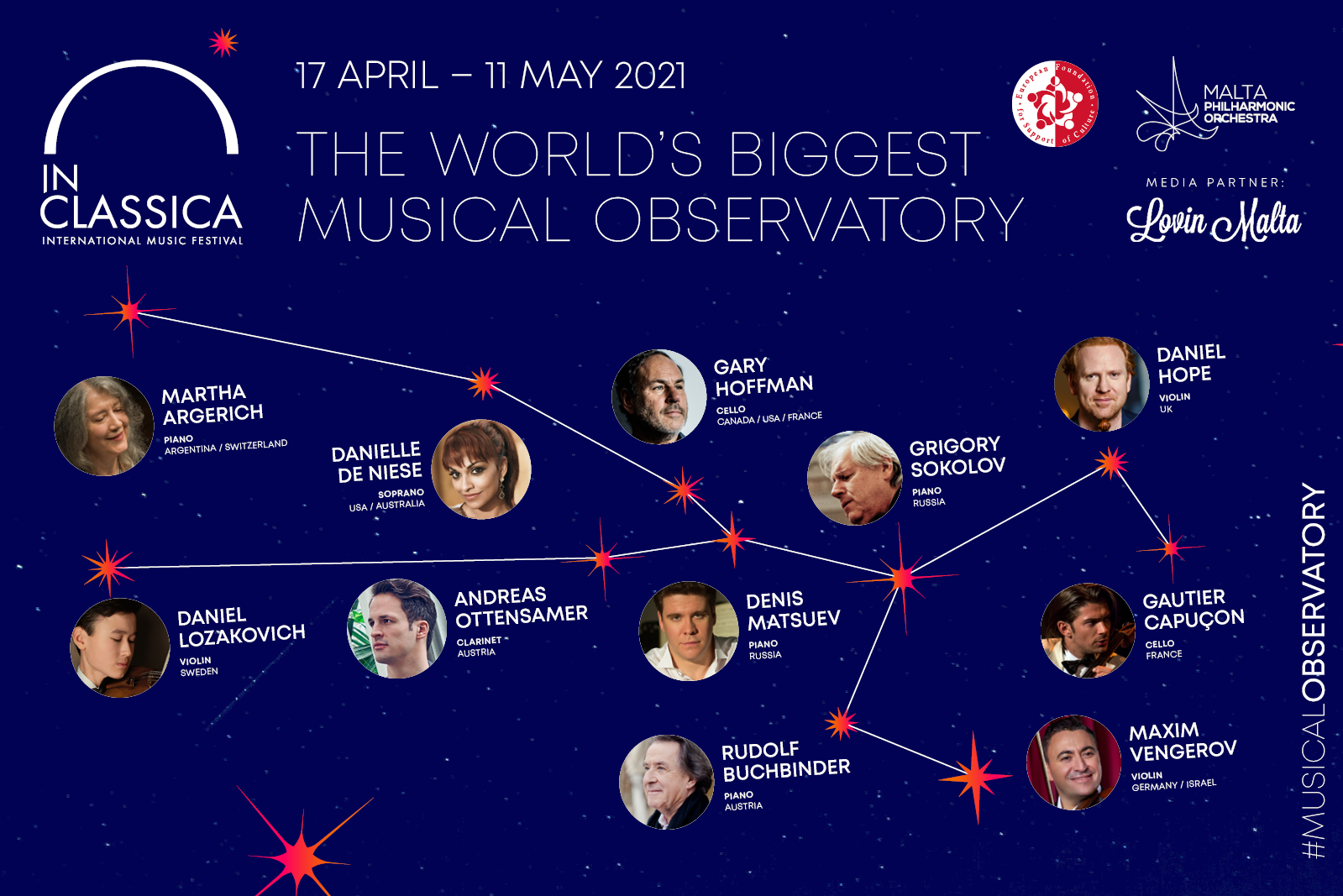 “This is an incredibly important event not just for Malta but indeed for classical music around the world. InClassica, our flagship event, brings together eight orchestras, thirty-three soloists and eight conductors in a veritable celebration of classical music, culture and cooperation. It is no understatement to say that this year has been incredibly difficult for the arts, and we are thrilled to be able to host such an ambitious – indeed, some may say audacious – festival in 2021. On a wider level, it is my firm belief that by continuing to bring the very best artists to this beautiful island and by continuing to support and promote home-grown talent, we can increasingly establish Malta as a new centre for classical music, not just in Europe but around the world. Additionally, by attracting audiences from overseas to our concerts we have an incredible opportunity to support the thriving tourism sector here in Malta.” – Konstantin Ishkhanov, president of the EUFSC.

The festival also welcomes back Alexey Shor as its composer-in-residence, a composer who currently holds residencies with the Armenian State Symphony Orchestra and Malta Philharmonic Orchestra Academy, and whose music was performed for the opening of the 40th anniversary of the Gramophone Awards ceremony.

Konstantin Ishkhanov reports that InClassica is equipped for any foreseeable COVID-19 restrictions should they still be deemed necessary at the time of the event; In collaboration with the Mediterranean Conference Centre and the festival’s ticket vendor, ShowsHappening.com, an innovative booking system has been developed that will ensure social distancing is maintained when selecting audience seats.

Also featured will be the final stage of the Classic Piano Malta International Piano Competition, a finale two years in the making that will see 70 of the finest young pianists from around the world compete across four rounds. In addition, the event will also host the Malta Classical Music Academy, a unique educational event featuring masterclasses and lectures from esteemed professors from across the globe. Those interested would be advised to book their tickets in advance for this rare event, one which is certain to prove popular to those both in Malta and overseas.

The festival promises to be an engaging and celebratory event, boasting world-famous soloists, conductors and orchestras. Those interested would be advised to book their tickets in advance for this rare event, one which is certain to prove popular to those both in Malta and overseas.