The spring lockdown in the current COVID-19 crisis wrought havoc with all that used to be taken for granted. It hit the arts scene as it did everything else.

During that period and since, as stagnation threatened to stifle artistic activities like concerts and recitals, Riccardo Bianchi, KorMalta's director sought to keep his singers busy. He sent them sheet music to study and eventually got them together in groups so that they would perform it at the opportune time. "United we stand" was how this concert was dubbed, with two performances in mid-October at the Greek Theatre in Mosta.

I went to the Saturday performance. It was rather cool and windy but a little shelter was afforded in the Greek theatre. All the standard precautions were observed: masks, hand sanitisers and social distancing. Apart from these, rules concerning proximity of persons was adhered to, with no more than 15 performers at any one time. It explains why the director formed three separate groups of singers so that including his own self and percussionist Daniel Cauchi, there were never more than 15.

It must be said that not all pieces chosen were ideally suited for open-air performance. If some pieces were dance songs others were tavern songs, one piece was even composed by a reigning monarch and others could be sung anywhere. What mattered most at the end of the day is that here was a very well-trained body of singers fired by their enthusiastic director. 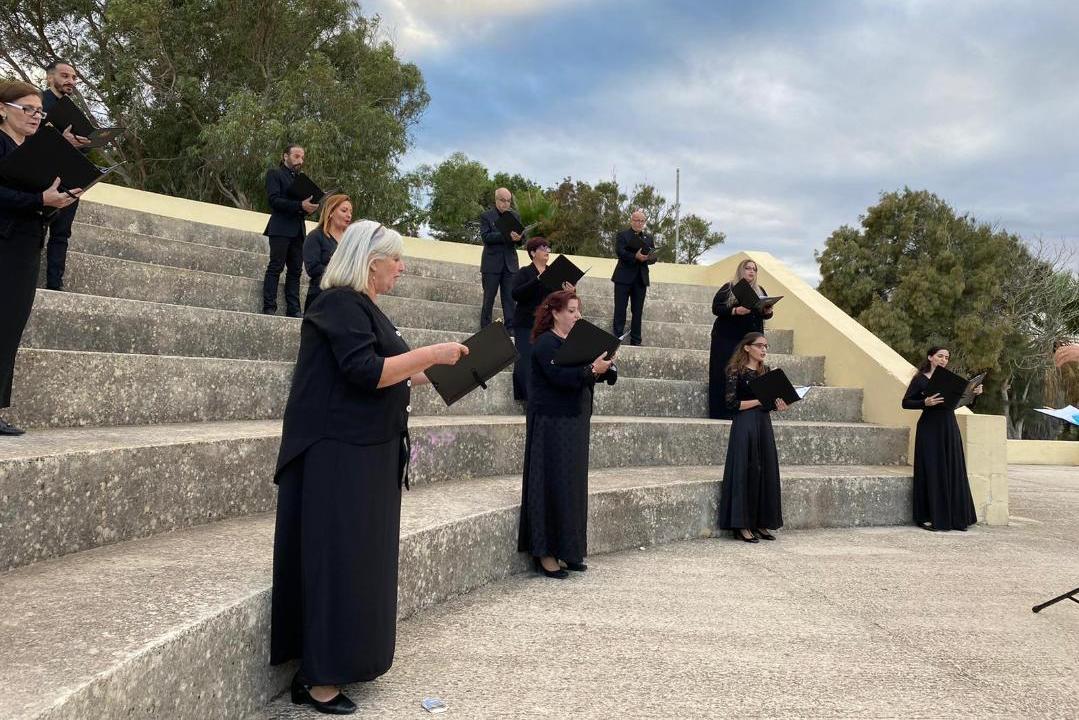 Bianchi is also a very communicative person, ‘simpatico’ in the very sense of the word and has a sometimes quaint and amusing way how to introduce the works performed. These spanned periods from as early as the Renaissance right down to the present time. Style was maintained according to idiom. In each group there was a lot of idiomatic variety.

Group A commenced with a Baroque piece, Antonio Caldara's Che Gusto è Mai Questo? followed by three much later works: Stroman's Standing in the Need of Prayer, Bepi de Marzi's evocative Signore Delle Cime and ended with Jochimsen's Lord Hold Me. This was an interesting blend inspired by the transatlantic Gospel song idiom with a touch of Gregorian chant followed by a chorale.

From France came Group B' s first piece, an anonymous, perky Tourdion. Before he turned into a psychopathic monster later in his reign, Henry VIII of England revealed a good hand at composing various pieces of music one of which is his most popular, the carefree self-explanatory Pastimes with Good Company. The mood changed with John Moore's contemporary An Irish Blessing. The group concluded with a late Renaissance piece, Giangiacomo Gastoldi's Questa Dolce Sirena.

Group C likewise concluded with another set of very different works, with German Baroque composer Melchior Franck's processional Laudate Domino. This was followed by the traditional Peruvian piece titled in Quechua as Hanaq Pachap Kusikuynin. The audience and choir rubbed palms to create a ‘raining’ effect enhanced by Daniel Cauchi doing his part.

Also reminiscent of a South American ambience was Ennio Morricone's very mood-setting On Earth as it is in Heaven. Robert Sund's Goodnight, Well It’s Time to Go ended the concert on a merry, charming note.

Externally the breeze made me shiver, but it was more than made by the warmth of the singing. Looking forward to KorMalta's next performance.