Updated Monday 10.20am with latest stats

The Labour Party has won the general election by a landslide majority, handing Joseph Muscat a strong mandate to head a government for a second term.

If confirmed, it would mean the PN would have made almost no inroads in Labour's majority over the past four years.

He said that after a divisive political campaign, his priority is to bring about unity and to invite all to work together to achieve even better results for the country.

Labour supporters have taken to the streets in celebration, gathering near party clubs waving flags. Some are going around the streets in their cars, horns blaring. A crowd has gathered near Labour headquarters and workers are erecting a stage at the granaries in Floriana.

Dr Muscat called the general election a year early, saying that allegations about corruption were instilling uncertainty in the economy.

After a bitter election campaign, his gamble appears to have paid off. He won a staggering 36,000 vote majority in 2013, yielding a majority of nine seats in Parliament.

The Nationalist Party has already warned that even if he wins the election, Dr Muscat will still remain under pressure as magistrates investigate claims of corruption made Konrad Mizzi and chief of staff Keith Schembri.

But all that will be put aside for the time being as Labour savours the first re-election victory – with a popular majority – in 40 years. 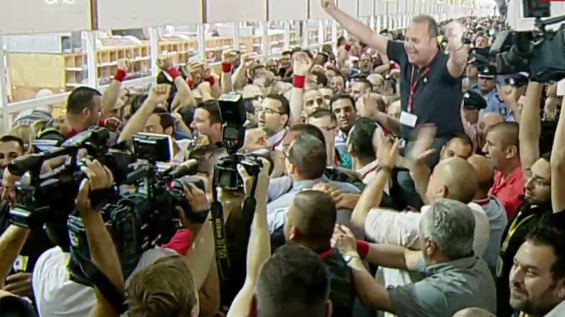 Dr Muscat is unlikely to be sworn in today – continuity means there is no urgency and he will probably call on President Marie-Louise Coleiro Preca tomorrow.

All eyes will then turn to his choice of Cabinet.

Who will be the new deputy prime minister and the new foreign minister? The incumbents, Louis Grech and George Vella have both not sought re-election. Dr Muscat has already declared that Mr Grech will still have a seat on the Cabinet table as a government consultant.

Dr Vella might be in pole position to succeed President Marie-Louise Coleiro Preca in just under two years.

Eyes will also be on the Nationalist Party and it is not yet known whether SImon Busuttil would resign as party leader.