The Labour Party still enjoys a big lead over the Nationalist Party, even though the gap has narrowed, according to a second survey commissioned by The  Sunday Times of Malta ahead of next weekend’s European Parliament elections.

According to the poll conducted by Misco, 55 per cent will vote for the Labour Party compared to 40 per cent for the Nationalist Party.

A similar poll conducted in March showed Labour with 59 per cent and the PN at 37 per cent.

In the 2014 European Parliament elections Labour had won 53 per cent of the popular vote to the Nationalists’ 40 per cent.

The minor parties can only count on very weak support: both the Democratic Party and Alternattiva Demokratika each have the backing of less than one per cent of voters. In March’s survey they were at two per cent.

The survey also showed that 3.4 per cent of voters will vote for the other parties. 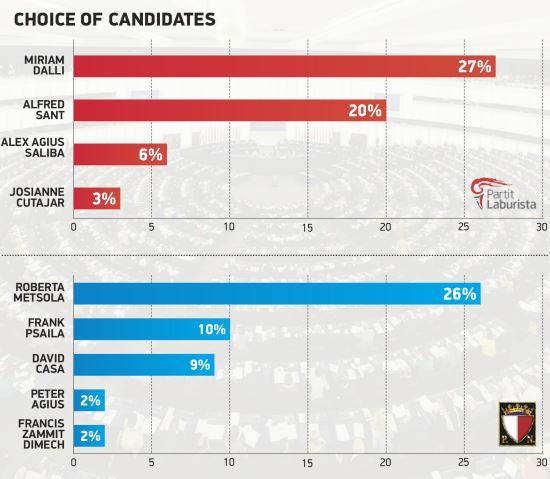 With these figures, the Labour Party is expected to win four seats, a gain of one, and the PN two, a loss of one.

According to the survey, the likely four candidates to be elected on the Labour ticket are Miriam Dalli, Alfred Sant, Alex Agius Saliba and Josianne Cutajar.

The Nationalist frontrunner is Roberta Metsola. She is followed by Frank Psaila and David Casa – the survey results show these two will have a close battle for the PN’s second seat. Mr Casa’s standing among PN voters has grown considerably since the last poll.

The survey also showed that six per cent of all respondents regret the way they voted in the general election of 2017. Of these, 15 per cent said they will vote Labour and 35 per cent PN.

As for turnout, 78 per cent of respondents intend to vote on May 25, while 11 per cent are still undecided. The projected turnout is higher than the figure seen in the March survey, likely due to a rise in the number of PN voters.

Who leads the pack among the candidates?

Miriam Dalli leads the pack among Labour voters, with 27 per cent of mentions. Twenty per cent said they would be voting for Alfred Sant, while six per cent backed Alex Agius Saliba and three per cent identified Josianne Cutajar. Other candidates received a minimal number of mentions.

Thirty-two per cent of those who intend voting for the Labour Party did not mention a specific candidate.

Among Nationalist voters, Roberta Metsola enjoys an equally commanding lead: 26 per cent. Frank Psaila was mentioned by 10 per cent and David Casa by nine per cent. Another two per cent mentioned Peter Agius and the same number named Francis Zammit Dimech.

Thirty-six per cent of those intending to vote for the PN did not mention a candidate.

The survey also identfied what respondents would base their vote on. Fifty-two per cent said current national issues, 33 per cent stated that it depended on the candidates, 28 per cent on the political parties, while only 22 per cent would base the vote on issues related to the EU.

The survey was conducted by MISCO International Limited among a random sample of 402 respondents between May 8 and 11. A sample of 400 provides a margin of error within ±5%.

It was the two leading MEP candidates for Labour and the PN respectively who also topped the list of names mentioned by respondents as possible successors to Joseph Muscat and Adrian Delia as party leaders should they step down.

Respondents were also asked if Dr Delia should resign if his party loses one or more seats in the EP elections. Among declared Nationalist voters, 67 per cent said no, 24 per cent said yes and nine per cent do not know.

Among PN voters who either said he should resign if seats are lost or who expressed no opinion, the person with the most mentions as possible successor to Dr Delia was Roberta Metsola. However, 61 per cent of PN voters did not provide a name.

Nearly four in 10 of all respondents consider themselves to be floating voters. The incidence of floating voters rises as one moves up the age brackets.

Half of those who regret the way they voted in 2017 consider themselves to be floating voters.