Scuba divers who have been visiting the island’s underwater dive sites for decades are noticing a dramatic decline in fish populations.

Seasoned divers who have been inside every marine cave for many years say today’s underwater life is nowhere as glorious as it used to be.

“I have a Dutch friend who is over 70 now. He has been scuba diving in Malta for 30 years. The last time he was here he told me his dive was poor and to take him somewhere where there is fish,” dive shop owner Mark Busuttil said.

“He said that the sea nowadays looks more like a beautiful cemetery. The reefs and rocks are beautiful but there is barely any marine life.”

Busuttil, vice-president of the Professional Diving Schools Association, says divers are finding the seabed largely clean and even, though the plastic pollution is lamentable, there is not enough of it to ruin the diving experience.

However, he says most diving tourists are complaining of a lack of fish and they blame it on overfishing and unsustainable fishing practices.

“It’s not just that too many species are being fished out of the water; it is also due to ghost fishing. Hundreds of fishing nets are dumped into the sea and continue to trap and kill thousands of fish,” he said.

“There are also thousands of small fishing cages that are a death trap to small fish. It’s quickly turning into an underwater disaster.” 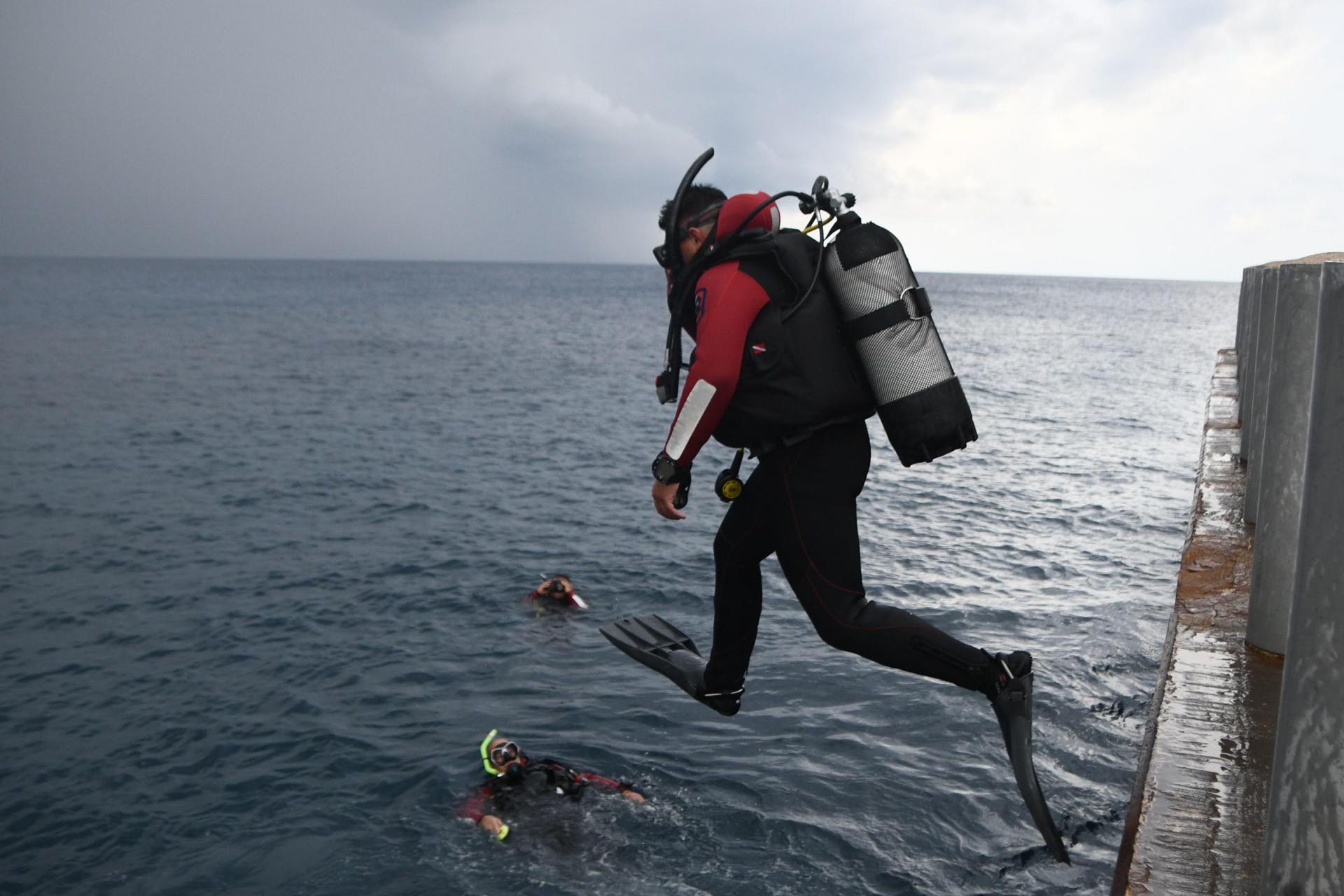 A scuba diver leaps into the sea. Divers are growing disillusioned with the lack of marine life in Maltese waters. Photo: Chris Sant Fournier

Italian journalist Michela Moro has been diving for over 40 years. She has been in almost every ocean around the world, until, 30 years ago, she discovered Gozo and fell in love with it, even buying a house as she wanted to explore its waters.

She estimates she has made over 400 dives in Gozo and she says it was a gem but is now fast becoming devoid of fish.

“Gozo was truly a gem. It had the most clear waters and was full of fish. I would see huge groupers (ċerna) and greater amberjacks (aċċjola). I don’t remember the last time I saw a sea horse and, even though I see some of the other fish, they’re smaller and fewer nowadays,” Moro points out.

The reef has turned brownish and there is much less seaweed as Moro fears the poor diving experiences along with overdevelopment in Gozo will soon force her to sell her property.

“It makes no sense to dive if there are no fish and life in Gozo is increasingly changing. I adore Gozo but there are less and less reasons why I should stay there now,” she said.

Only the fish we eat make it to the market, so we can only be confident of dwindling numbers in the species we love to cook

Moro believes the solution would be for the island to create marine reserves where large portions of the sea are untouched by human activity to save marine life by allowing it to flourish and thrive.

“In Gozo, there is not a single marine reserve. All other countries have them. It should have been created years ago... today, it has become indispensable.”

Diving instructors say the dwindling fish populations have not yet kept tourists away but divers are now taking to diving review websites to advise fellow enthusiasts that they should not expect to see too many fish here.

Marine biologist and lecturer Alan Deidun says the Mediterranean is transforming into a jellyfish-dominated sea.

Jellyfish are thriving because there are fewer fish to eat them and fewer fish hunting for the same food they eat.

However, we cannot be scientifically sure there are indeed fewer fish in the sea, he contends.

“We only register data from the fish market and we can notice that fishermen today are catching less of most species of fish we eat,” Deidun said.

“But only the fish we eat make it to the market, so we can only be confident of dwindling numbers in the species we love to cook.”

But species like jellyfish are thriving. And it’s not just the tentacled nuisances that are on a roll. Other alien species, seeping from the Indian and Atlantic Oceans from the Suez Canal and the Strait of Gibraltar in search of warmer waters, are settling in the Mediterranean Sea.

Recently, the EU French presidency released a report showing that, despite faint signs of improvement in recent years, fishing pressures in the Mediterranean remain very high and 86 per cent of all fish populations are overexploited.

Deidun said the local fishing industry is too small to be blamed for the devastating impact on the Mediterranean.

Most of the culprits are the huge, overseas trawlers which operate unsustainably.

Now, the professional diving schools are calling on the authorities to regulate fishing more, just to give the species enough time to regenerate.

“Fish lay a lot of eggs and procreate abundantly. If we just give it some time, it will regenerate rapidly,” Busuttil said.

Fifth of tourists in Gozo are scuba divers

Gozo Tourism Association CEO Joe Muscat said 15 to 20 per cent of all tourists who visit Gozo are scuba divers.

“Over the years, we have invested a lot in advertising our islands as diving havens. We have equipped the Gozo hospital with a hyperbaric chamber for divers who need urgent medical assistance and added shipwrecks along the southern coast to make it more attractive,” Muscat said.

“Diving is one of the ideal industries for Gozo because it does not pollute, uses Gozo’s natural beauty, is sustainable... and divers are some of the highest-spending tourists, so it would be a pity if the industry had to be dented in any way.”