During an event in New York in the early 1960s, purported to promote peace between the US and the USSR, rising Soviet diplomat Alexander Ivanov (Sam Reid) defects, leaving his wife Katya (Rebecca Ferguson), a spy for the Americans, behind in the motherland.

As the story unfolds, the film flashes back to the early days of their romance, while also flashing forward to 1992, where the older Alexander (Charles Dance) is plagued by guilt about his missing wife, while his niece Lauren (Ferguson again) is determined to find out Katya’s true fate.

Based on the acclaimed 2004 novel of the same name – and adapted for the screen and directed by its author Shamim Sarif – Despite the Falling Snow boasts strong performances, an evocative sense of time and place (despite the constant falling snow) and touches upon the always fascinating themes of love, patriotism, betrayal and hope in its story without offering the depth it merits.

Cold War espionage, the intrigue that it triggers, the duplicitous nature of its protagonists and the dangers inherent in its execution have always been great fodder for literary works and the screen, yet this adaptation fails to ignite the senses either emotionally or intellectually given Sarif’s seeming desire to avoid melodrama, almost to a fault.

For in the telling of its story, Despite the Falling Snow is very low-key; any tension rather timidly rendered, the characters’ complexities remain hidden, their emotions suppressed, and by the end, when the compelling mystery at the heart of the story approaches resolution, it lacks the dramatic impact it deserves simply because we have little time to truly engage with the characters. That all the actors speak with the same accents doesn’t help, leaving little to differentiate who’s on which side of the Cold War.

This is a shame, for the cast give its all. Rising star Rebeca Ferguson handles her dual role very well, with some subtle makeup and hair adjustments providing effective physical differences for the two characters she takes on, and Ferguson adds enough nuance to easily distinguish between the stoic Katya, a woman on a mission whose resolve threatens to crack when she falls in love with her target and the determined Lauren, curious to learn about her missing aunt’s past.

The actress connects strongly with her co-stars in both timelines, while as Lauren, she shares some convincing sparkle with Antje Traue, as Marina, the Russian journalist helping her in her enquires, yet the flirtatious Sapphic undertones are given short shrift, pretty much like any other emotion hinted at as the story unfolds.

The rest of the cast is equally strong. Sam Reid is convincing as the morally upstanding young Russian diplomat keen to make a difference to his country. While Oliver Jackson-Cohen and Anthony Head share the role of Misha, the latter offers one of the film’s most powerful scenes as it reaches its denouement.

However, the cast’s commendable commitment can’t hide the film’s overall lack of ambition and scope. I suspect it would have been more suitable for the small screen, possibly as a mini series, to allow the characters time to breathe and develop properly.

For there is enough commitment to pique curiosity and interest in the characters. The storyline is certainly compelling enough to make me want to check out the book to hopefully colour in the nuance and emotion so unfortunately missing from its screen adaptation. 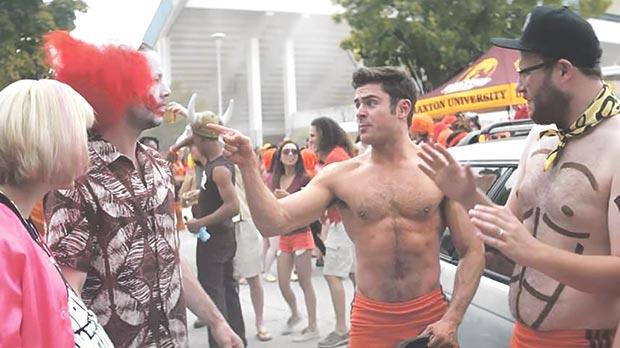 Bad Neighbours 2, Class: 15, KRS Film Releasing Ltd. In the sequel to the 2014 film, Mac Radner (Seth Rogen) and his pregnant wife Kelly (Rose Byrne) are leading a good life until the unruly sisters of Kappa Nu sorority move in next door.

The loud parties threaten the sale of their home, so the couple turn to ex-neighbour and one-time enemy Teddy Sanders (Zac Efron) for help. Now united with the former college student, the trio devises schemes to get the wild sorority off the block. But the rebellious young women refuse to go down without a fight.