A landmark Sliema building recommended for scheduling by the heritage watchdog has instead been condemned to demolition by the Planning Authority. 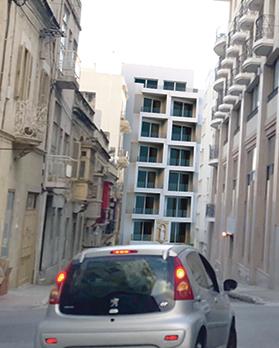 An artist’s impression of how the eight-storey block will look.

The 19th-century house in St Agatha Street – known to locals as Id-Dar il-Ħadra (the Green House) for its unusual green facade – will be demolished to build an eight-storey block including maisonettes, apartments and basement garages.

The Superintendence for Cultural Heritage (SCH) described it as a “good example of vernacular architecture from the period with important architectural details including a cellar borne on arches and an embellished rear façade overlooking the garden”.

The facade also bears a prominent niche with a statue of the Virgin Mary, which gives its name to St Mary Street, directly ahead.

The SCH said the house was in a good state of repair and warranted preservation due to its cultural heritage value. It called for Grade 2 scheduling to ensure its protection.

However, the Planning Commission ignored these concerns and unanimously gave the go-ahead for the demolition.

Over several hearings between November and last week, the plans were amended to retain several important heritage features and integrate them into the new development, including a back terrace arcade, a spiral staircase and the niche on the facade (though not the rest of the facade).

At a hearing in January, it was decided that the project architect should be present while the Design Advisory Committee evaluated the latest set of plans, “in order that an agreed set of drawings will be arrived at”.

The committee subsequently said there were no objections to the project in terms of design.

Some 70 residents and heritage NGOs also submitted objections or supported calls for scheduling.

The Sliema Heritage Society and the local council both appealed for the façade and its characteristic green hue to be preserved and incorporated into the new project, along with its most important internal architectural features.

Local councillor Paul Radmilli told the Times of Malta: “In my view, yet again it is crystal clear that the SCH is being completely ignored by the Planning Commission. On two occasions the Superintendent recommended against demolition, yet the Commission was only intent on obtaining a green light from the Design Advisory Committee.”

He said the meetings between the project architect and the DAC showed a “system of collusion between developers and the Planning Commission”.

Flimkien Għal Ambjent Aħjar environment officer Tara Cassar said when the application was first presented that the PA should intervene to protect the few remaining heritage buildings in the area from destruction.

“This street has been stripped of its Urban Conservation Area status, leaving some of the oldest houses in Sliema completely unprotected,” Ms Cassar said.