The CEO of the Lands Authority, which is negotiating a deal with the Fortina Hotel, is a business partner of the hotel’s shareholders. 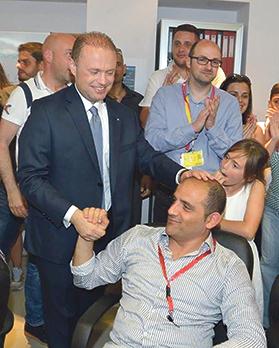 James Piscopo, a former CEO of the Labour Party and right-hand man of Prime Minster Joseph Muscat, holds shares in two private businesses together with members of the Zammit Tabona family, including the Fortina’s CEO Edward Zammit Tabona.

The authority and the Fortina shareholders are negotiating a deal on the possible release of certain contractual clauses related to the acquisition of public land on the Tigné Seafront, where the Zammit Tabonas want to develop a multi-million-euro office block.

The family stands to benefit handsomely if the deal is successfully concluded.

In 2016, when he was already the CEO of Transport Malta, Mr Piscopo incorporated a company called Undecim Five Investments Ltd. Through Undecim, he holds shares in BBF Ltd, a company developing an old people’s home, and in Floors of Stone Company Ltd, which is involved in the importation and distribution of flooring materials.

The other shareholders in these two companies include a number of top businessmen, among them Edward Zammit Tabona and other members of his family, although they are not board members.

When contacted, Mr Piscopo admitted that he is in business with the Zammit Tabonas but said he has nothing to do with the Fortina project.

He also said that since his appointment as CEO of the authority, last June, he has initiated the process of selling all his shares in the two companies.

I am not leading any negotiations on Fortina

“As from the outset I wanted to avoid claims of perceived conflict, ultimately in the interests of the Lands Authority, I took immediate steps to start divesting and selling the shares,” he said.

Producing an MFSA certificate showing that he had already sold his interests in BBF Ltd, Mr Piscopo said he has also started the process of selling his shares in Floors of Stone.

“All business links will be severed and stopped,” he said.

Asked about the conflict of interest – sharing business interests with the same people the authority is negotiating with – Mr Piscopo said that he is not directly involved in the deal.

“I am not leading any negotiations on Fortina,” the CEO said. “There was only one meeting to keep the ‘discussions ongoing’ for which I was not present.

“Moreover, no decisions have been taken on the matter since my appointment.”

Asked whether he had informed his minster (Ian Borg) about the conflict of interest, Mr Piscopo said that “representations have been made to the Board of Governors, Minster and Parliamentary Secretary”.

Last week, the Planning Authority gave a permit to the Fortina shareholders to build a 15-storey office block and extend their hotel to 23 storeys.

The permit was approved despite the fact that a deal has still be reached with the Lands Authority to change an important clause inserted in their contracts from the time they acquired the public land during Nationalist adminstrations.

According to these clauses, the public land was sold to the Zammit Tabonas on condition that it will only be used for an extension of their hotel.

Changing this clause could push the market value of the land up by tens of millions.

The Times of Malta has already revealed that despite no agreement having yet been reached – which anyway requires the approval of Parliament – the owners of the Fortina have already struck an agreement to sell the whole office block to Bet365. This is a giant gambling company which plans to relocate most of its current operations from Gibraltar to Malta after Brexit. The deal is worth more than €60 million.

Until 10 years ago, Mr Piscopo was employed at Air Malta. After assisting Joseph Muscat in his campaign to become Labour leader, he was appointed the party’s CEO.

Upon Labour’s electoral victory in 2013, Mr Piscopo was appointed chairman and CEO of Transport Malta.