Following a rather cool and stormy May, June brought the heat back to the Maltese Islands, raising the average air temperature to 26.3°C. Last month was, in fact, the hottest June recorded on the Maltese islands since 1923. The first heatwave of the meteorological summer struck the islands between June 8 and June 10, with the mercury nudging a blistering 37.8°C on June 9, which became the hottest day of the month.

As the sweltering heatwave passed, two warm spells heated up the islands with mean maximum temperatures 5°C higher than the climatic norm being recorded over two days. The lowest minimum temperature of the month was recorded on the first day, which saw temperatures drop to 14.6°C.

Malta was not the only European country to feel the heat this summer as, according to the World Meteorological Organisation, the average temperature recorded in June throughout Europe was 2°C above average, making last June the hottest on record for the entire European continent.

June was not only warmer but also drier than average locally, given that no precipitation was measured during the month. June 2019 was therefore one of only four Junes in the past 70 years to not record any precipitation. The mean total cloud cover for the month also fell below average, standing at 1.5 oktas. 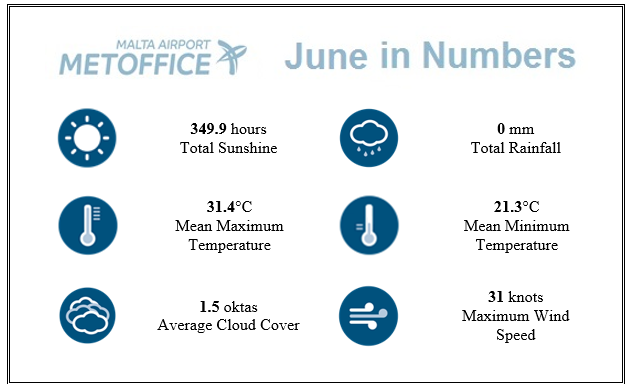 Less clouds resulted in longer hours of bright sunshine for the Maltese Islands, where the sun shone for 349.9 hours throughout June, surpassing the climate norm by almost 22 hours. The brightest day was recorded on June 3 with 13.1 hours of sunshine, while the dullest day saw an equally enjoyable 7.4 hours of sunshine on June 15th.

As Malta basked in summer sunshine, locals and tourists alike flocked to the beaches dotting the island to enjoy a refreshing dip in the Mediterranean Sea, where the average sea surface temperature stood at 22.5 °C; one degree warmer than the climate norm of 21.5°C.