A Maltese law firm, whose agents boasted to an undercover reporter about being close to government ministers, has had its licence to sell passports to foreign investors suspended.

An announcement on the Malta Individual Investor Programme website said that Chetcuti Cauchi Advisors Ltd, holders of two IIP licences, had their rights to act as agents suspended “until further notice”.

The move followed an episode of Enquête Exclusive (Exclusive Inquiry), in which a Maltese agent is filmed describing his friendship with Prime Minister Joseph Muscat and Parliamentary Secretary for Citizenship Julia Farrugia.

Another agent is caught on camera telling the French TV journalist that passport buyers who are originally turned down can get a second chance if ministers "turn a blind eye".

The journalist was posing as a representative of African clients wanting to purchase Maltese citizenship. 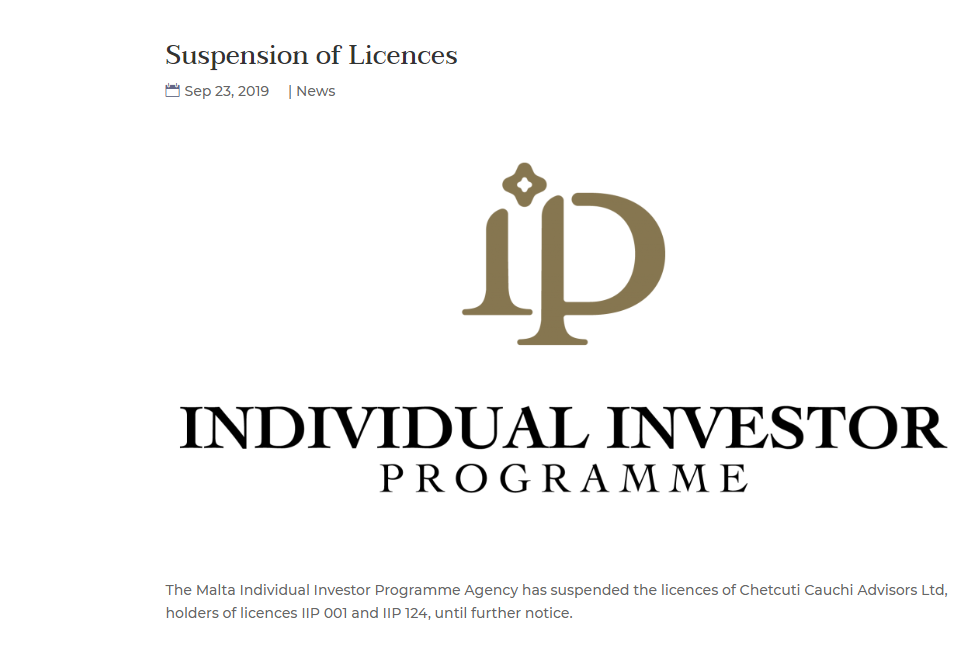 The announcement went up on Monday.

In a statement later in the day, the government said that the firm had been suspended "given the dissemination of misleading information".

It said recommendations made to ministers were based solely on due diligence findings and that the firm in question, Chetcuti Cauchi advocates, had had 19 per cent of its applications refused.

The Malta Individual Investor Programme has now asked the IIP regulator to review every file submitted by the agency and has put all its pending applications on hold.

Industry insiders commented that the legal firm's immediate suspension “seems like damage control”, pointing out that it was known that operators in the citizenship market talked this way to prospective clients.

The news programme says that all the ministers involved were later contacted for a comment and all of them said they had never intervened in any applications. Chetcuti Cauchi Advisors Ltd has also denied trading in influence.

The programme has prompted a call from Nationalist MEP Roberta Metsola for an outright "ban on passport sales".

In a tweet, she said it was time to stop the sale of citizenship.

“Everything we warned about with the sale of Maltese and EU citizenship with no genuine link to Malta is happening. This is not the face our nation should be showing to the world. End this monetization of basic rights and corruption loophole now,” she said.